Ok Two Buck Chuck is its nickname from days past when it cost $1.99. It now costs $2.99 and it is really Charles Shaw wine. 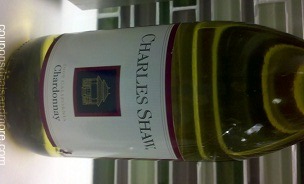 Hubby and I went to Trader Joe’s when we were in Las Vegas, and since wine is not sold in NYS grocery stores and so I could never purchase wine at a Trader Joe’s in my state, I decided, what the heck, and sprung the three bucks for some Two-Buck-Chuck.

I chose the Charles Shaw Chardonnay 2009.

While researching this wine online, I discovered that Franzia bottles the Charles Shaw, and buys grapes from all over. Like most Trader Joe’s products, there is only so much available information.

I’m sorry folks, I know a lot of you are fans but this is a non-oak Chardonnay, so no buttery taste. It was actually bitter on my tongue and produced bile in the back of my throat (that was a first for me!) after I swallowed. It had little bouquet, even with a vigorous swirl, although the color was clear and light yellow.

Thinking food could only help, I tried Two-Buck-Chuck with some Combos. Cheap wine should go great with a snack food in my opinion. The wine was marginally better, but still not good.

Even at the low, low price of $2.99 I could never recommend Two Buck Chuck Chardonnay. And wow am I sad about that.

Have you tried the Two Buck Chuck? What did you think?

Note: this post originally appeared on Coupons, Deals and More in 2011.