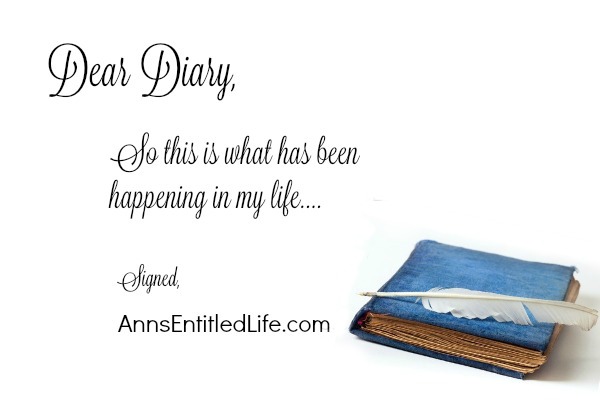 One of my New Year’s resolutions for Ann’s Entitled Life was to bring it back closer to the weblog it began as in 2013. As I explained in January… “Hopefully when I look back on Ann’s Entitled Life in 10 years I am not regretting the time spent on this blog, but rather reminiscing about the life I was leading while recording our activities on this blog.”

So that means I should update what is going on in my life once in a while, dontchyathink?

We’ve been down in Florida since the beginning of January and done absolutely nothing. Now that is both good, and bad. We’ve spent the time relaxing and rejuvenating, but done poopie as far as sightseeing. I had hoped to take my father to some of the local St. Augustine tourist sights via one of the trains, but he got down to Florida and immediately ended up ill, so that didn’t happen.

We have managed to go out to eat at least once a week. Mr. Max goes to the groomer on Tuesday, so Hubby and I take the time to shop, eat lunch out, etc on Tuesdays. Our groomer will also take him on Fridays for the day (so we can be out and about), but we have not really taken advantage of that this year.

Hubby went to Vegas the middle of the month to see his Mom. Her sister flew in from Paris (with one of her sons), and Hubby went in to facilitate things (car rental) as well as to visit. They do not speak English, so he was a help. His mother also turned 85, so it was nice that he could fly out and see her for her birthday.

One of my MIL’s caregivers had the flu. She called off as soon as she was diagnosed, but it was too late… for Hubby. When he got home, he promptly came down with it and spent most of last week sick. As much as I tried to stay away from him, I eventually succumbed too. I didn’t eat from Friday through Sunday… knowing me, I probably gained 5 pounds. #@!&%

I’ve had the flu several times in the last 12 years. And they have a Vegas connection. Hubby and I were out in Las Vegas about 9-10 years ago visiting him Mom for the holidays, and we both came down with it at the same time. We were super sick for a good 5 days. Worst. Trip. Ever.

And now Hubby brought the flu back from… Vegas.

I thought what happens in Vegas stays in Vegas?

Apparently the flu-bug didn’t get that memo.

It does make me wonder though. I mean I know the air quality in Las Vegas is horrendous (go up in the mountains and look down on the city. BLECH) When the winds come through and clear the horrible haze out, everyone breathes easier. But it is still weird that our flu episodes have a direct link to one spot in the United States.

Poor Mr. Max. While Hubby was gone I was solely responsible for taking him out for his promenades. Every morning we’d head downstairs and take a walk before breakfast. Then, after he awoke from his mid-morning nap, another, longer walk. By the time he was ready for his third outing of the day, he didn’t want to look at his leash or come to the door.

I finally figured out that a tired Max is a happy Ann!!

So, I spent yesterday washing sheets, blankets, etc and airing the place out, trying to get rid of whatever germs are left around the place. We’ve gone through a ton of hand sanitizer, little Kleenex (it wasn’t that type of flu), a lot of tea, Theraflu, industrial strength flu meds and lots of OJ and 7-up.

So that’s our month here in the Ann’s Entitled Life household. What’s new in your world?