Hubby has two vehicles. One is a truck, the other a little Honda. The Honda was actually the car left in Utah that he (or I) would use when he (we) traveled to Salt Lake for business. Since he would go to Salt Lake every 3-4 weeks and stay for a week each time, having a vehicle there made sense.

When Hubby sold his share of the business, he decided to bring the Honda home. It was low mileage, and even though it has NO pick-up whatsoever (it supposedly 4 cylinder, I think he just doesn’t feed the chipmunks under the hood) he loves the head room. When he brought that vehicle home, it was 5 years old and still smelled like plastic.

Since Hubby began buying rentals last year, both the truck and the Honda started getting more use. A lot more use. The Honda no longer smells new (actually it smells pretty gross most days), and the truck mileage doubled!

Both vehicles are 7 years old, and so he knew he’d have to replace at least one sooner rather than later. He’s been looking for a replacement for the Honda, but can’t find anything out there that works for him. They no longer make the Element (putting a lot of chipmunks out of work), and so he needs something that can handle the interior abuse inside his vehicles.

He discovered the easier of the two to replace was his truck. His Dodge Ram was a crew cab, 1500, 6′ bed. He decided to investigate an 8′ bed in diesel. We took off down to the southern tier last month to look at one they had at a dealership in Attica, NY. That RAM was niiiiiiiiiiiiiiice! I mean super nice. It wasn’t a dually (something he definitely did not want), and the the interior was all luxury – leather seats, climate control, yada yada. But, Hubby decided the diesel wasn’t for him. I didn’t like the diesel part much myself. The diesel engines of today are much quieter than they diesel car/truck engines of the 80s and 90s, but it was nevertheless a diesel.

So he took to the internet to see where he could find a 8′ bed, gas powered RAM that wasn’t a dually. He discovered one in Ohio, approximately 3 hours away. He decided to forgo having the local dealer get the truck. He was afraid he wouldn’t get a deal. The guys in Ohio gave him a trade in value on his current truck, and then immediately knocked off over $4K from sticker.

After a little bit of back and forth, Hubby put down a deposit with his credit card, and bought himself a truck. We were cash customers, so as long as his trade-in checked out clean we only needed a certified check for the rest. All the paperwork was faxed to our attorney (we do everything in trusts as part of estate planning). The only issue that developed was the notary service used by the dealership dropped the ball big-time. They contacted the attorney’s office on a Tuesday, and never reconnected that week. When the dealer spoke to Hubby Friday (thinking the issue was on our end), Hubby called the attorney’s office to find out the scoop.

The attorney called the dealer, and the notary was back at the attorney’s office in under an hour. LOL Unfortunately, the notary decided not to send the FedEx out that day (no idea why not), and the following Monday was Labor Day, so we had to wait nearly a week longer than necessary to pick-up the truck. If we had just been signing, we could have picked up the truck the next day. 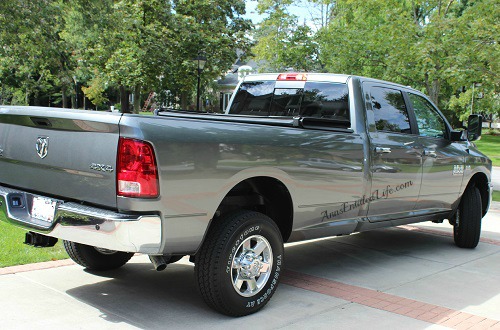 This is one long truck, let me tell you! It is no where near as nice inside as that diesel we looked at. This one has cloth seats, not leather (probably a good thing considering what Hubby will have protruding from his back pockets), there isn’t climate control (awwww), nothing with the passenger side seat is automatic, and the key fob actually goes in the ignition! That is weird. The key doesn’t go in the ignition (it is for the tailgate and just hangs there off the fob), the fob goes into the ignition. On my vehicle the fob just needs to be somewhere in the vicinity to start the car, and is what I expected with this one too.

The back-up camera is fantastic! There are colored lines so you can tell exactly what your wheel alignment is. The back-up camera on my vehicle is just a camera, not a help guide. The truck has the sensor beeps in only the back, not the front and sides.

Hubby ordered the cover right after he put down the deposit. It is the same manufacturer as the one on his trade-in, and he knew he liked it, so he figured why not. It arrived the day we picked up the truck. Hubby still has to get the bed sprayed and undercoating – providing the undercoating doesn’t void any warranties.

He also needs the step bars because I am literally crawling into this thing it is so high! I have a milk crate in the backseat for now so I can get into the truck without having an aerobic workout.

The very, very, VERY best feature on this truck? This: 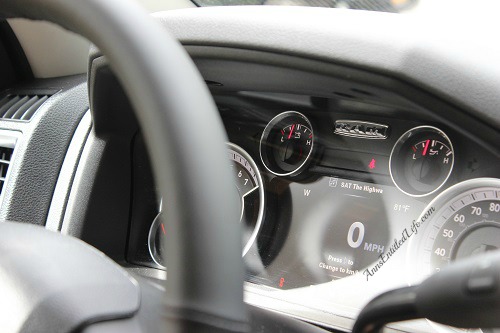 I am in heaven! A digital speed that I can see from the passenger seat! Hubby has already turned it off on me twice. Yes, I am a backseat, er, passenger seat, driver.

We plan on driving this down to Florida in December and that means I can now shop to my heart’s content for household goods to transport down to the condo with us! We can fit a whoooooole lot into the bed of this truck! Hubby is very happy as there is little he would buy now that won’t fit in this bed.

I must say I just love new-car-smell! Hubby is pleased with his new purchase, and I am happy that he is happy.

Ever buy a vehicle online? How did that work out for you?