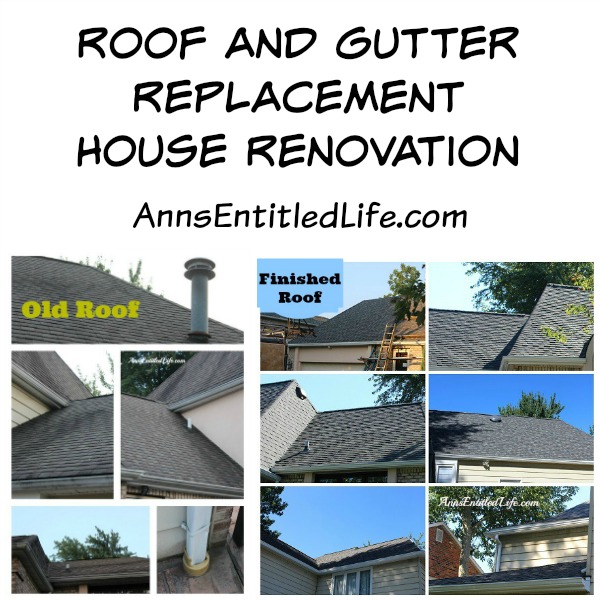 Roof and Gutter Replacement; House Renovations – the research, materials and process that took place when replacing our residential roof.

Hubby and I had a long renovations list this year. We amended it a bit in August both adding and subtracting from our list of renovations. One renovation decision that did not change this year was a new roof and gutters.

I explained a bit about the sad state of our gutters a few months ago. They absolutely needed replacement. Our roof might have had a year or two of life left in it, but Hubby found out it was on recall, and the back of the house roof was in pretty rough shape. 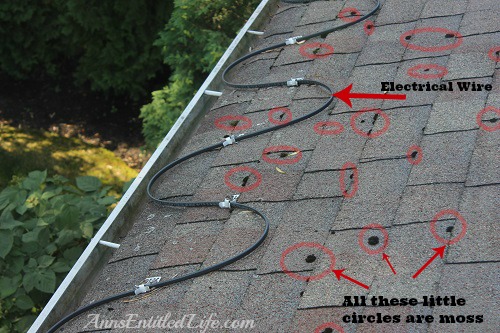 That was the roof over Hubby’s office. It leaked a few years ago when ice dams would form, melt, and reform, all in the course of a day. That part of the house gets the winter sun which causes melting. Unfortunately, there wasn’t enough airflow underneath the roof to prevent ice dams. So, we installed electrical tape a few years ago which heated the ice in the gutter allowing the water to flow, and not refreeze and damn-up. We aren’t the only people on the street with this tape. It seems to be a hazard of the winter sun.

And all those little circles? Moss. There was a ton of it. It had been scraped, but there was no way to get it all and no way to keep it from coming back. You see while that area gets full winter sun, the summer sun is blocked by all the trees. That and the roofing wasn’t wonderful (did I mention it was on recall?), well that part of the roof, and the tier above it were a real mess. 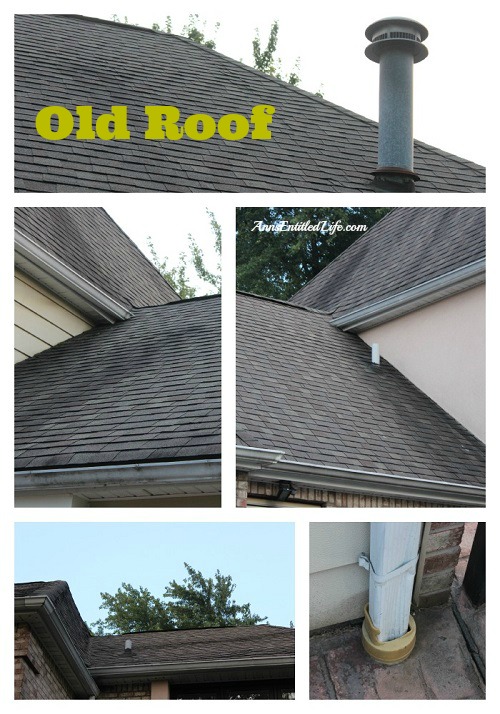 This is the rest of our old roof on our house. The big stack was left there from filling in our in-ground pool. It was the gas heater stack. We had it removed with the new roof.

Hubby researched the crud out of roofers and roofing materials. In the end, he went with the CertainTeed Landmark Pro material used by TurkMasters Roofing. TurkMasters put the roof on my grandfather’s house this past spring, and then Hubby used them to put a roof on one of his rentals. While they weren’t our cheapest quote, he knew they’d do a great job based on past work. 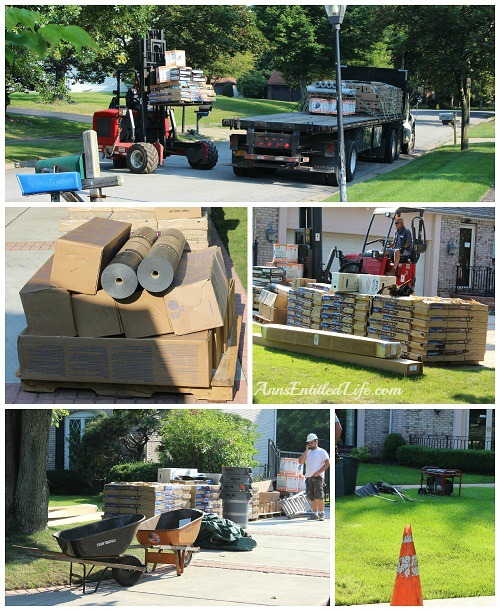 The Friday before TurkMaster’s arrived, they called to let us know what date. We had previously cleared away all the back yard furniture, table and chairs, Max’s toys and the back yard hose. The items I didn’t move (front hose and trash cans), they moved that morning. 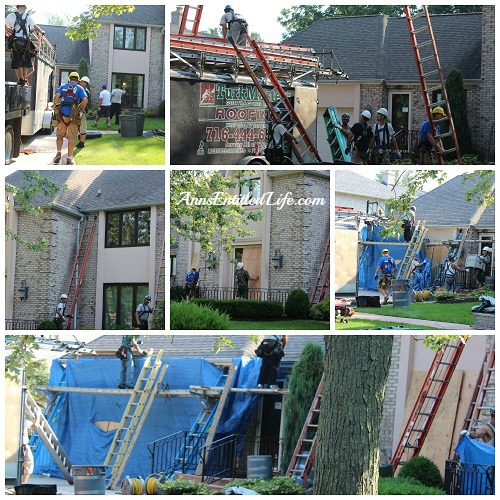 The set-up was like a ballet. They set up tarps, ladders, trash cans and more. I watched them set up for over an hour and I was most impressed with the coordination, safety measures and tarp and window precautions. For all I know this is standard, but it was still a sight to behold! 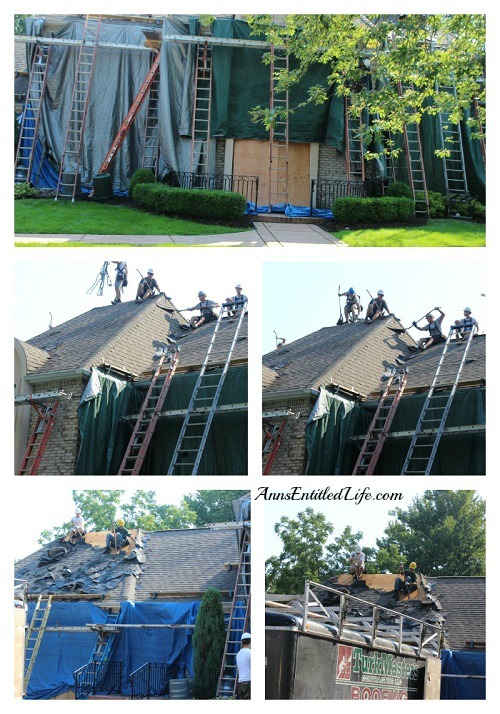 There were 14 men on the job, and they seemed to break off into different crews, each taking a different section of the front of the roof to strip. 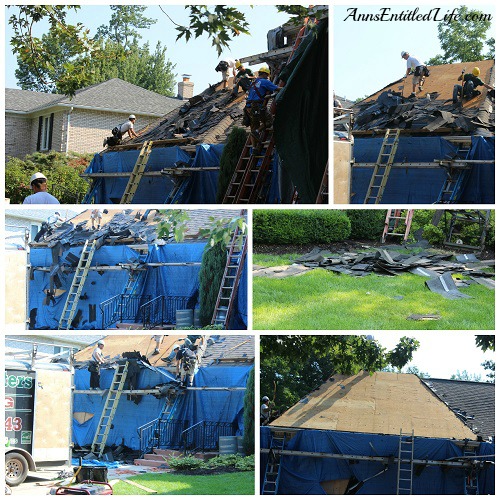 The stripping creates quite the mess! Men with wheelbarrows would come by, fill up the trash dumped from the roof, and transport the trash to the dumpster in the driveway. 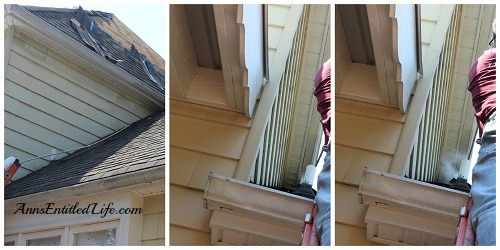 Early on one of the men went down with bee stings. He encountered a nest underneath one of the soffits. As soon as they told me, I called my brother – a licensed exterminator with his own company – to come over and kill the bees. He was there within 90 minutes, and they were able to continue with that part of the roof later in the day. 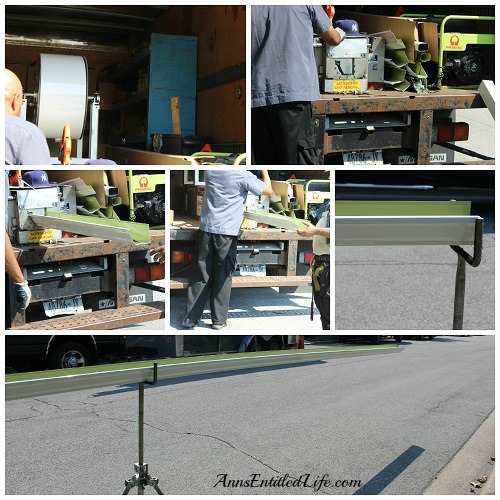 While the roof was being stripped, a truck arrived to make the gutters. We chose white because there is a LOT of color on our house already. And white is easy to replace. The gutter truck had a spool of 700# white gutter aluminum on the truck. The man who operates the machine marks the length needed, inputs that measurement and the machine spits out the gutter in the size needed. The machine runs by generator in the back of the truck. The stand is placed to hold up the gutter that is longer than 10 feet.

The man running the truck laughed to me that the person that invented that machine is now retired on the beach in Maui or somewhere else exotic! That machine has made that big a difference to the gutter business. 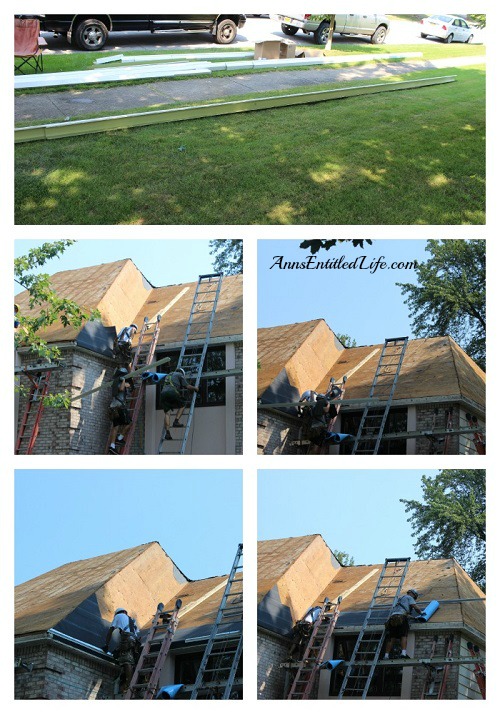 There were a lot of gutter sitting on the lawn!

Once the roof was stripped, they started applying the underlay and ice sheeting. 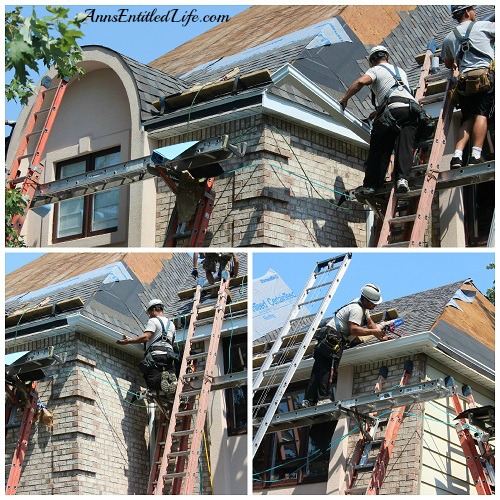 As soon as the first few layers of roofing are up, the gutters are fitted and put in place. 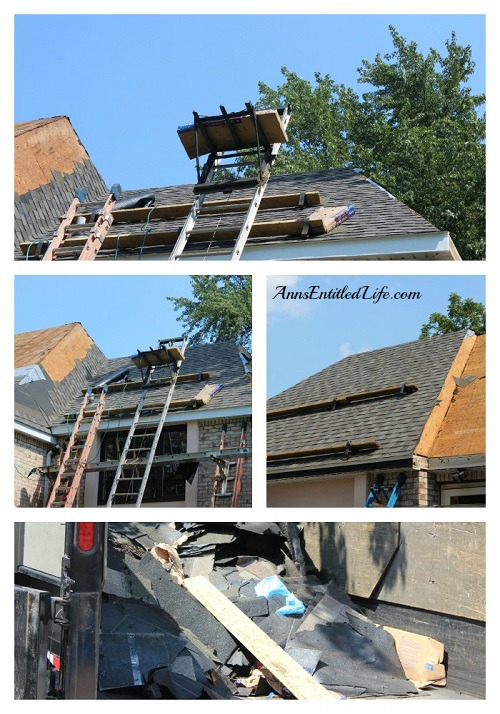 In all this took us three days, including a day where they came back and power washed everything. They worked long into the night, stopping the first day at sunset, the second day after full dark. 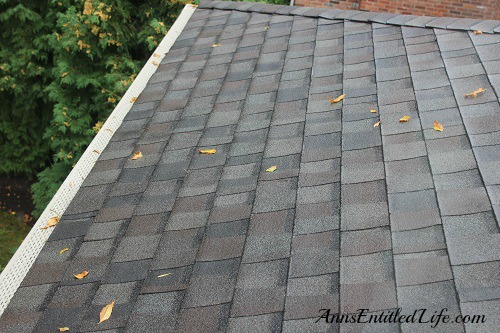 This is what the mossy roof over Hubby’s office looks like now! We decided to get gutter guards. We were told that every 4-5 years check them out and have the dirt that may accumulate washed out. 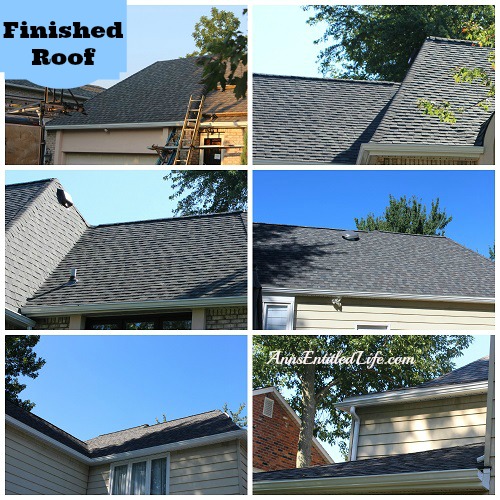 The one thing left we need to do is get the electrician out to hook up the garage fan Hubby had installed for circulation. Sometimes, that garage gets pretty hot, and this should help immensely!

This is our finished roof. We shouldn’t have to do this again in our lifetime. 🙂