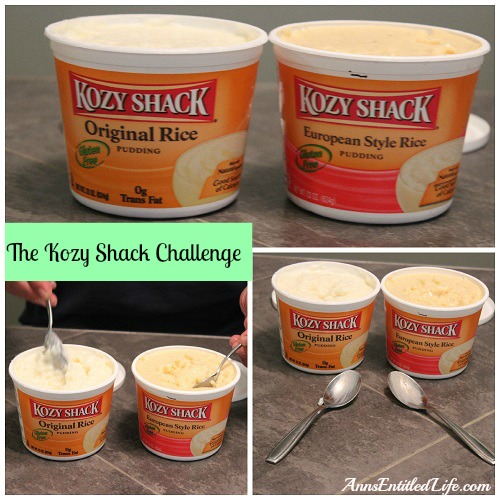 One thing that has bothered him for a looooooong time (seriously) was what was the difference between European Style and Original Kozy Shack Rice Pudding? I mean it really bothered him, but not enough for him to spend the three bucks on the European Style that he was afraid he might not enjoy.

So, last week one of the local grocery stores had Kozy Shack on sale for $2.99, I had 75¢ coupons – which they doubled – and Hubby figured for $1.49 he’d take a chance on the European Style Rice Pudding and see if he liked it.

What was unusual, was when he brought out a second Kozy Shack. I thought that was a little excessive, even for him (and no, it never entered my mind that he would offer to share with me, ’cause he never has before).

Hubby then announced, “Let’s do a taste test comparison!”

I nearly fell over at the word “let’s” as it implied I’d get to taste too!

To my great shock, Hubby offered me up a spoon and a pudding. Then he promptly complained when I double dipped – ’cause you know he never gets my germs any other way.

I told him I needed more than a spoonful of eat to compare, and he actually went along with that argument. He allowed me two spoonfuls of each type!

● Darker
● More glutinous
● Hints of brown sugar
● Not as sweet as Original, and even though the European has ground vanilla, it tasted less vanilla-y