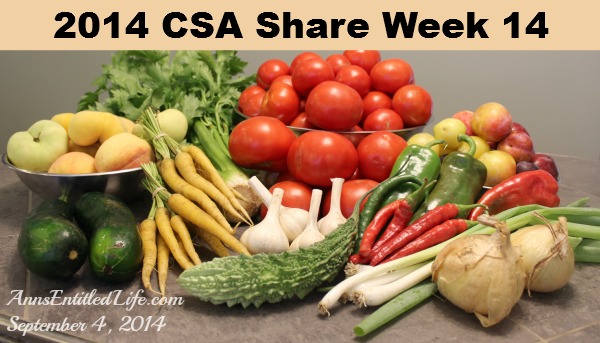 This week I brought Mr. Max out for a ride with me when I went to pick up the CSA. That meant no u-pick (I sorta planned it that way). Hubby and I spent a lot of time processing produce last week, and I have some excellent recipes coming up in the next few weeks to prove it, but really don’t have time to process a lot.

Since my plants went away due to blight, I have to look for tomatoes to freeze elsewhere. I asked Hubby if he wanted to go for a drive for Roma (IMO about the easiest to de-seed and process), but he isn’t sure we will have the time this weekend (Max has another Cornell session next week, so we need to get mid-week things done on the weekend). We agreed I would buy more tomatoes at the

The fruit is more peaches and plums. I made a fantastic plum pie earlier this week. At first I wasn’t going to share the recipe because I had no confidence in what I made. After it had cooled sufficiently, Hubby decided to be the guinea pig (what a guy!), and try the plum pie. He asked me if I wanted pictures before he cut into it, and I told him, “no”. He walked away while wolfing his piece of pie down, so I thought that was promising. Hubby can be a tad critical at times.

I served myself a piece of plum pie about 15 minutes later, and then grabbed the camera. Hubby started laughing at me when he heard that! (“I thought you weren’t going to share that recipe!?”) Yeah, it was that good!

I am making another pie with the plums I picked up this week, even if I just freeze for later.

And yes, I will be sharing that plum pie recipe, but not until September 15th.