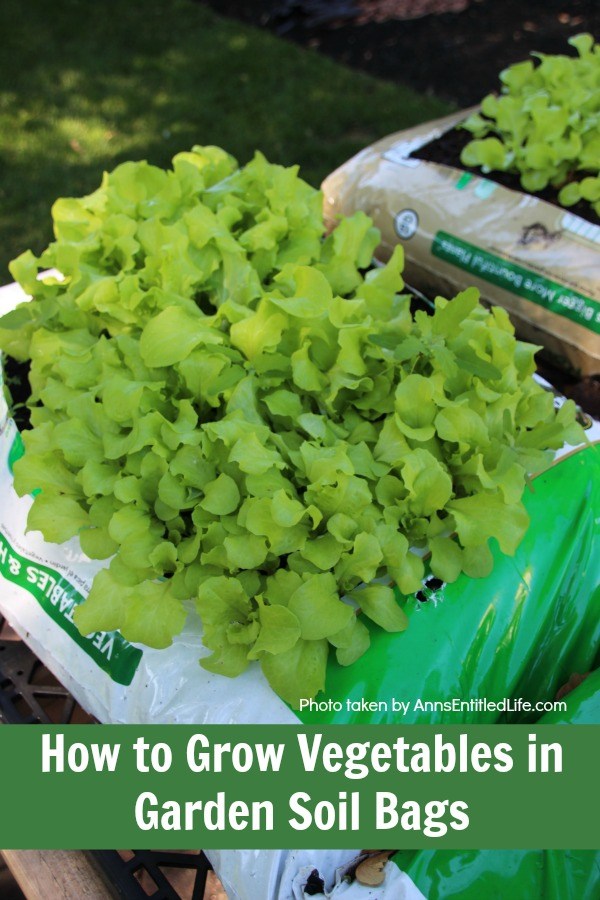 Learn how to grow vegetables in soil bags eliminating the need for garden planters or in-ground planting. Grow your vegetables from seed, and have fresh vegetables all summer long with very little gardening work!

How to Grow Vegetables in Garden Soil Bags

Would you like to grow your own vegetables all summer long with minimal effort? Well, have I got a plan for you…

My friend Dian over at DianFarmer.com told me about an idea to grow vegetables in soil bags. No more planting in the ground or transferring the soil to containers; you simply cut open a bag, drop in some seeds, and Viola! Veggies.

I thought it was an interesting idea but could see some real issues with it mostly concerning rooting and waterlogging. Hubby and I brainstormed how it would be possible to grow some plants in bags, and what we would need to do to make it happen.

The first thing we needed to do was figure out how to get those bags off the ground and high enough so I could reach them without breaking my back (I went to container gardening with little in-ground gardening for a reason). We also needed there to be drainage so as not to allow puddles of water to gather inside the soil bags. 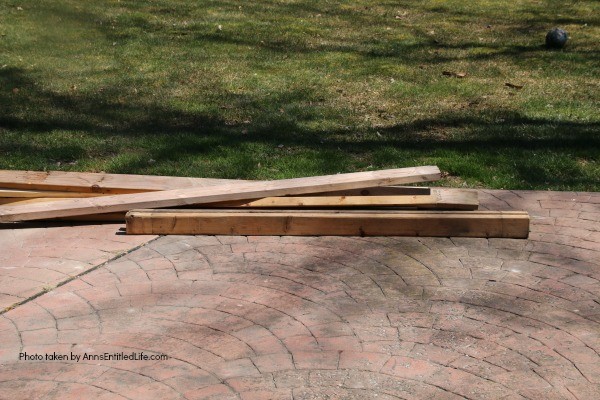 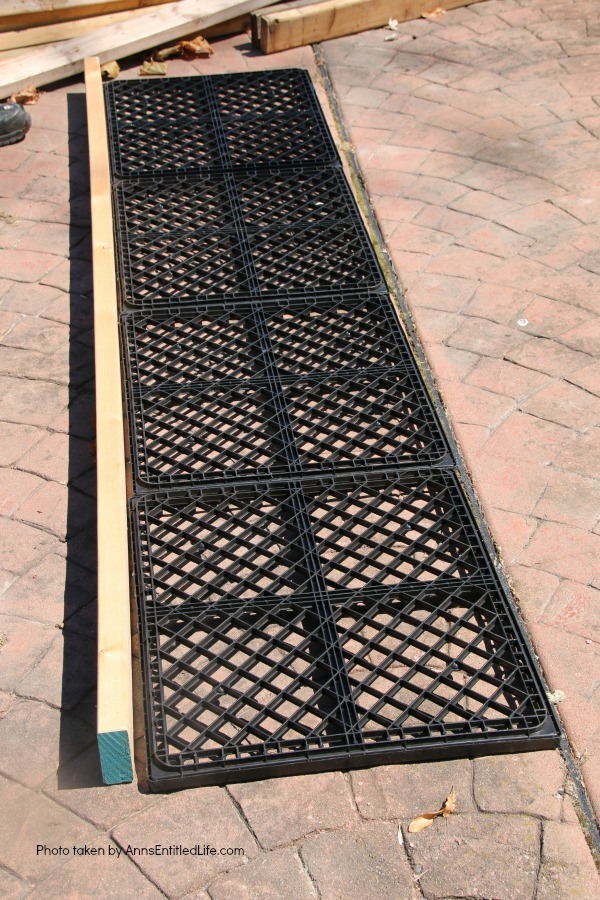 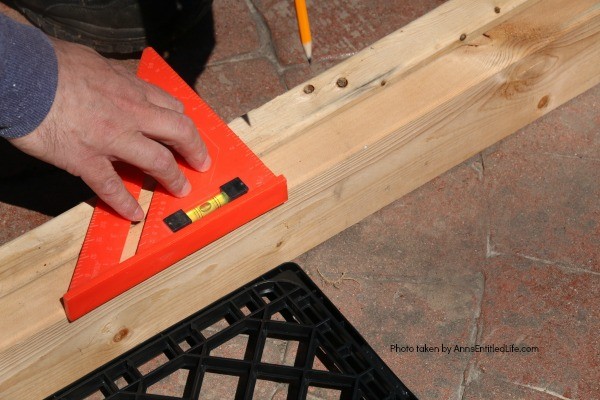 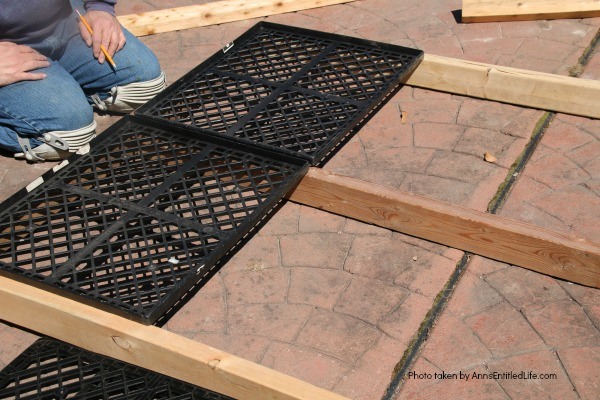 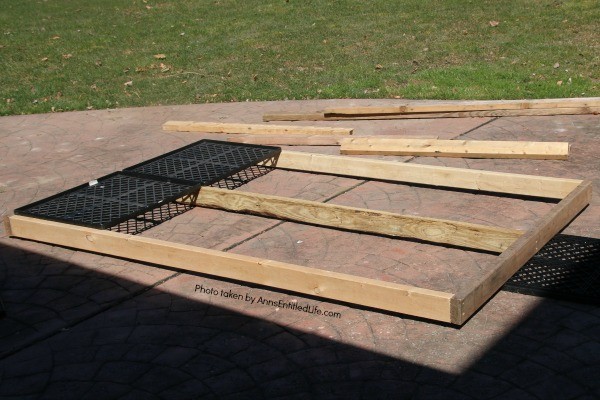 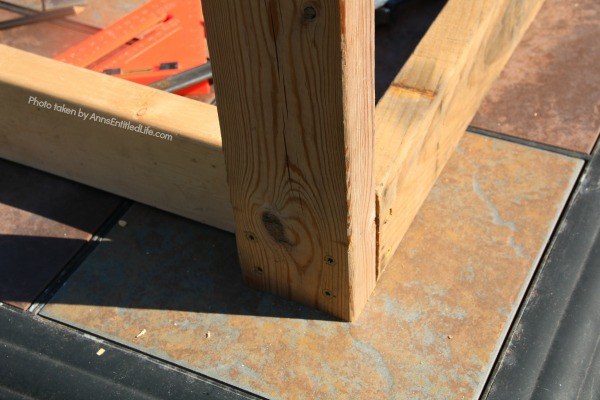 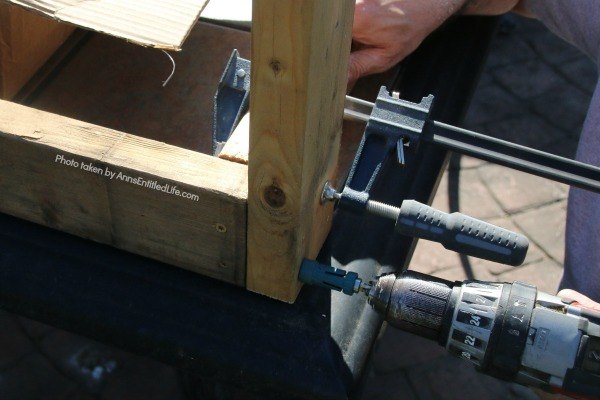 Hubby built me a stand. The stand was really, really important to me because as I said… no bending over. The stand is simply 2x4s angled together to form a table with no top. He made it sturdy enough to last (we left it out all winter long). You could use anything with slats… saw horses with just 3 planks on top would work! 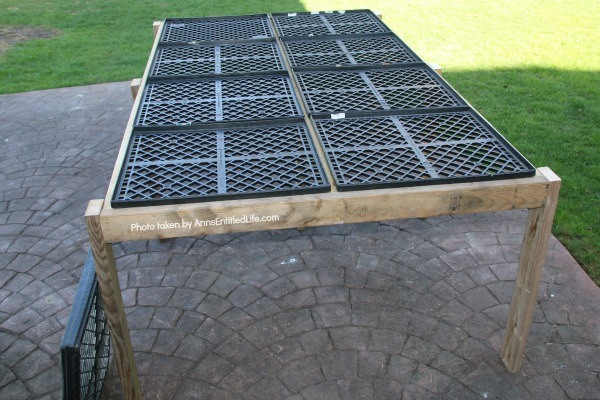 Hubby had picked up some old bread trays somewhere (don’t ask, that man is a real packrat), and he built the stand to fit those trays. We placed them on top of the stand when he finished building it. That the trays had slats was very important in allowing excess water to flow through and not pool. They were also strong enough to support the bags of dirt. 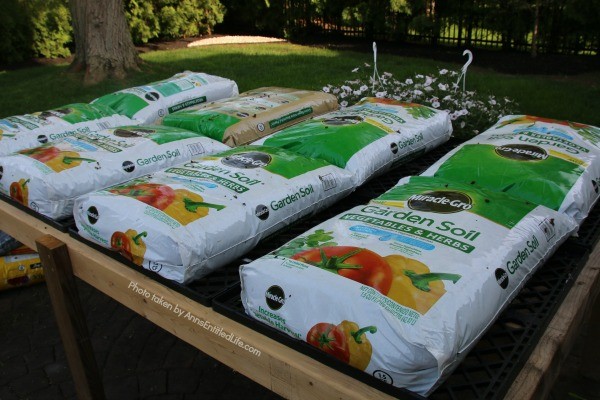 I researched root systems. The ones with the smallest root system that we would eat were lettuce, spinach, and mustard greens. Radishes were another option, but since neither Hubby nor I would eat them, we passed.

I purchased two different types of dirt: Miracle Grow Garden Soil and Miracle Grow Raised Bed Soil. I wanted to see if there was any difference between the two for the purposes of this experiment… there was not. 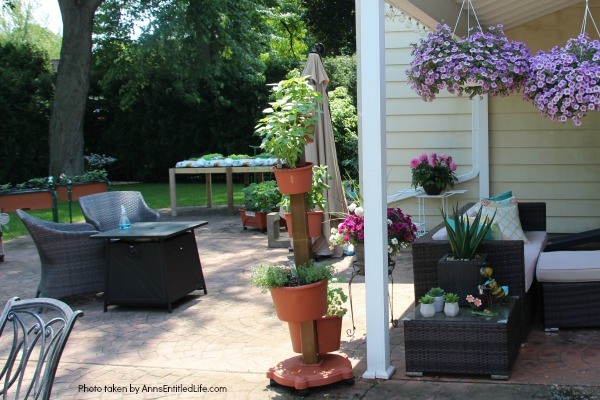 I chose an area on the patio where I could easily access all the bags for watering and harvesting, and where there was a decent amount of sun but not full sun all day. 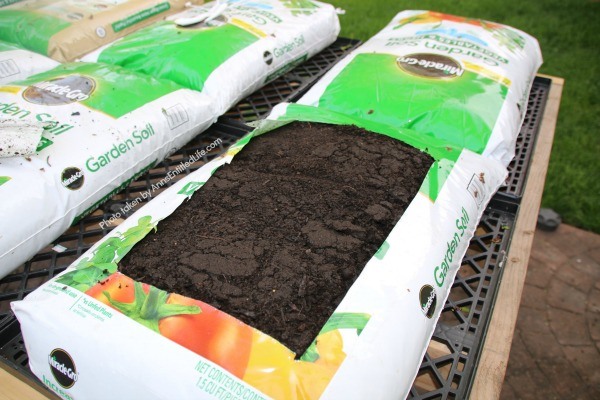 I cut a rectangle on the top of each of the bags removing the plastic I cut out, but leaving enough bag-side so the dirt wouldn’t spill out (about 3″ all the way around the top). I poked a LOT of holes in the bottom of the bag so the water wouldn’t build up inside the bag. The last thing I wanted was root rot. 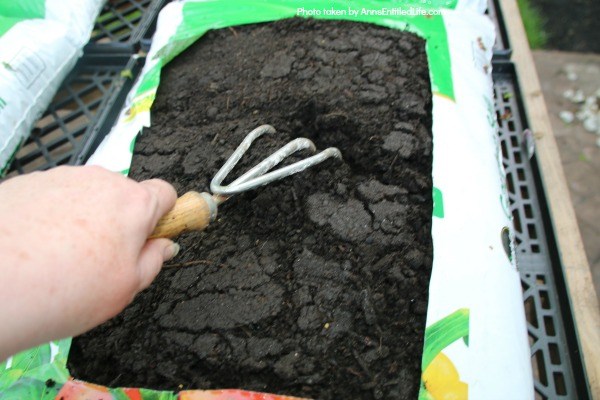 To plant the seeds, I lightly scraped the soil with a hand rake. 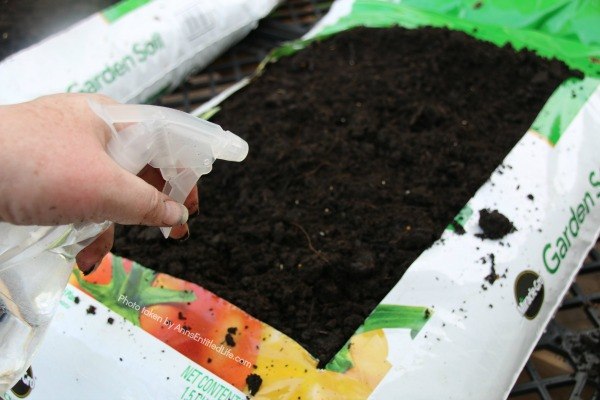 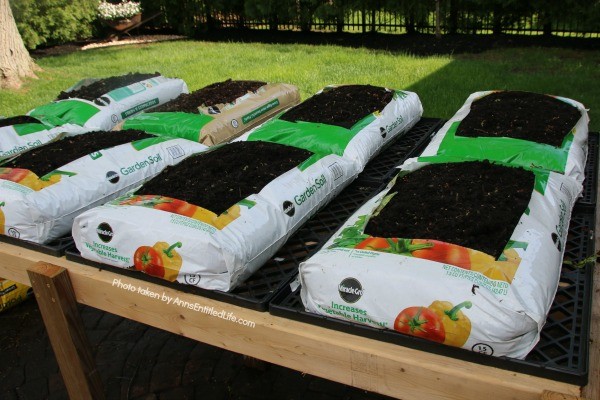 I then marked what was growing in each bag with a sharpie on the bag itself. I grew three different types of lettuce, and there was no way I was going to recall what was what without some sort of reminder.

I LIGHTLY watered several times per day until the seeds germinated and started to sprout. And by lightly, I mean I used a spray bottle the first week, and then moved on to a watering can. The watering can be held up high, and the soil sprinkled until wet. I did not want to use a hose as I did not want to wash away the seeds. 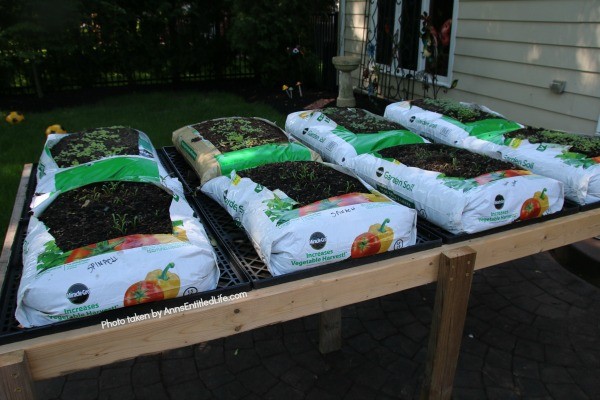 Note: I only fed these plants a few times after they seeded using a liquid water feed attached to the hose. Once the lettuce, mustard greens, and spinach got going, I was able to water using my hose. 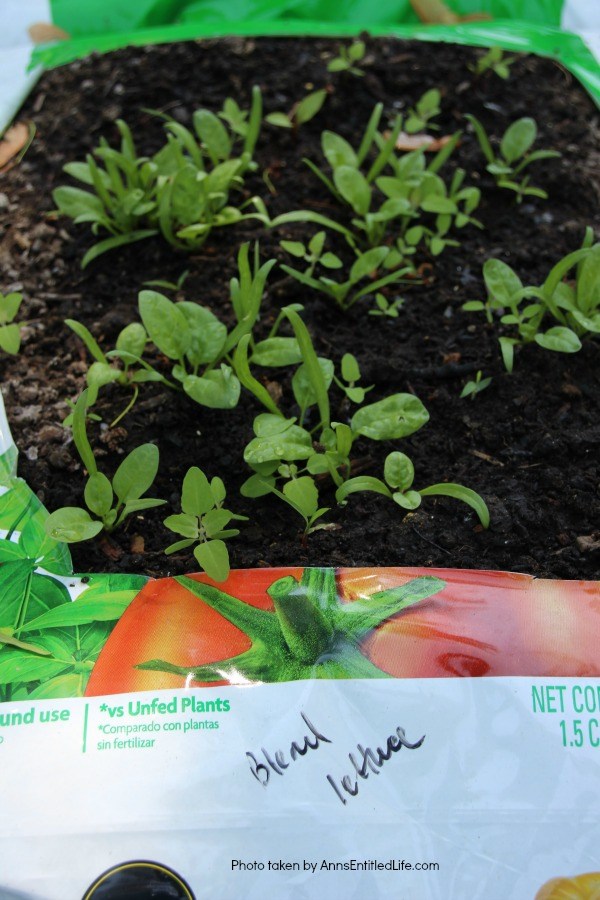 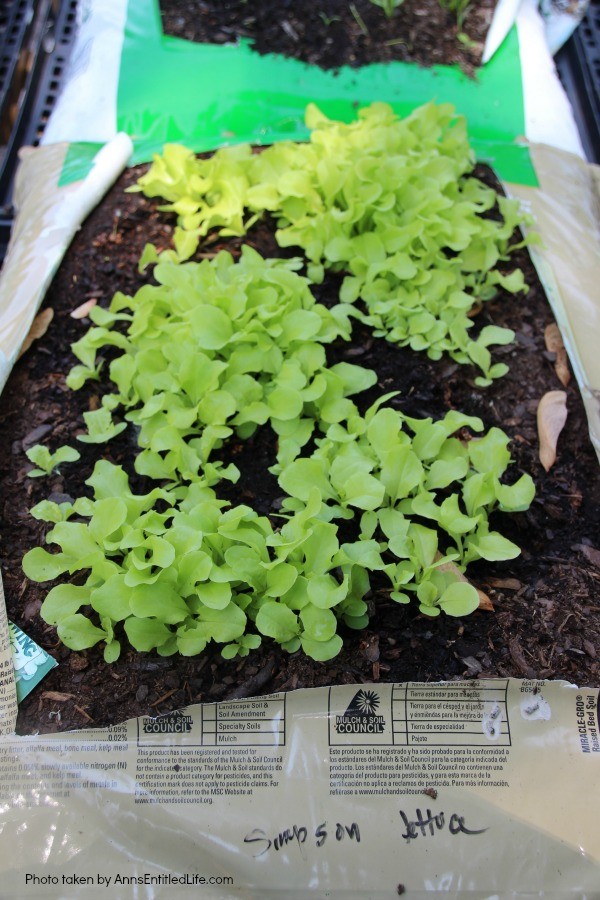 To say I was shocked at how well these grew is an understatement. No one, and I mean no one came into our house for several months without leaving with a bag of lettuce. 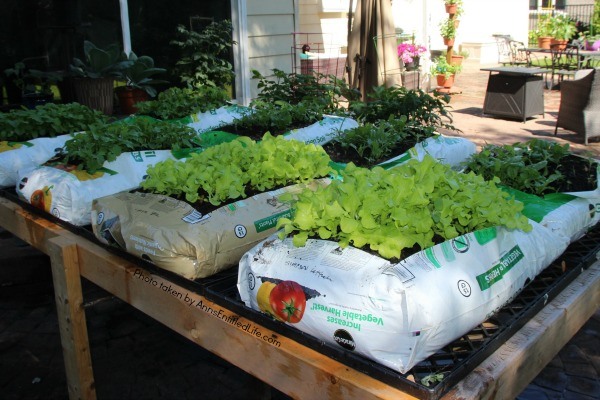 During the cooler weather of June, I clipped back the lettuce and it simply regrew like crazy. In the summer the lettuce got a little straggly as it was a very, very hot summer here in WNY last year – and lettuce likes things a tad cooler – but we still had a ton of lettuce during the summer months. By the beginning of September it was again producing so much we were giving it away by the bagful. We had fresh lettuce from June until October last year. I was starting to feel like a rabbit.

Note: when harvesting the lettuce, do not pull it out by its roots, instead, using some gardening scissors clip back to the about 3″ high from where the lettuce roots in the soil. It will regrow quite quickly. 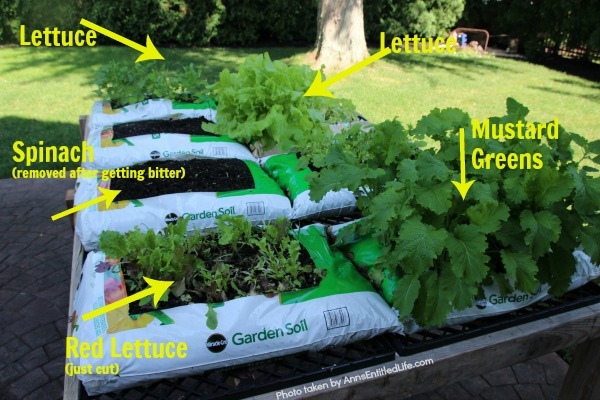 The spinach was less successful. It grew very well early on, I harvested a few times, and then BAM! it bolted and grew too large too quickly, and got bitter. This was due to the extreme heat. 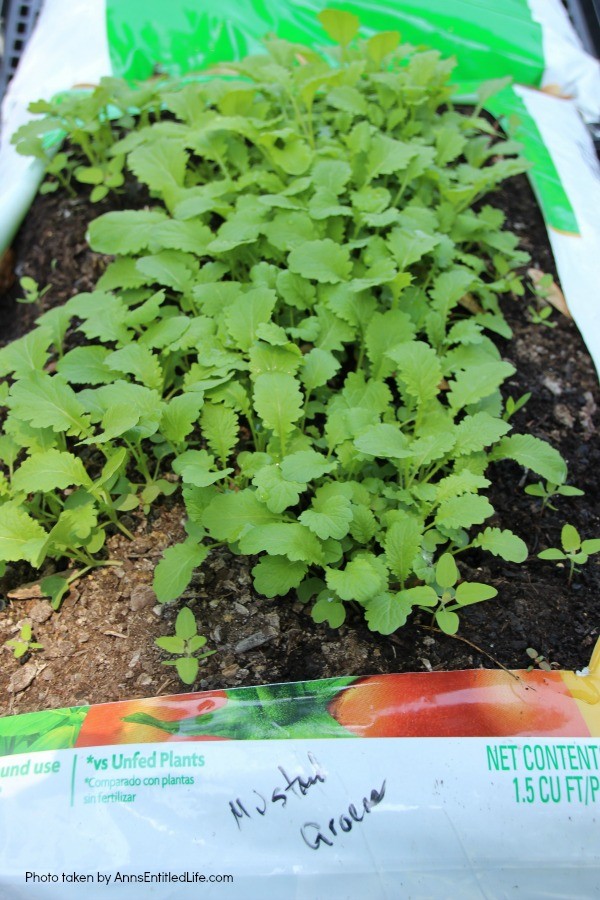 The mustard greens were wildly successful! Hubby made a few soups, and they were also excellent fresh. And this was in spite of the heat and only growing in one bag. A friend decided she was growing them this way to feed her lizard. Whatever works!

Since this table was under a maple tree I was picking out the helicopters for a few weeks when they dropped. There was also the occasional weed to pluck, although nothing crazy. Some mulch once the seedling sprout could help keep the weeds at bay. A sheet of plastic would simply smother the seeds and seedlings, so I do not see it as an option.

At the end of the season, we removed any remaining plants and dumped the soil into our bushes. There was no waste. 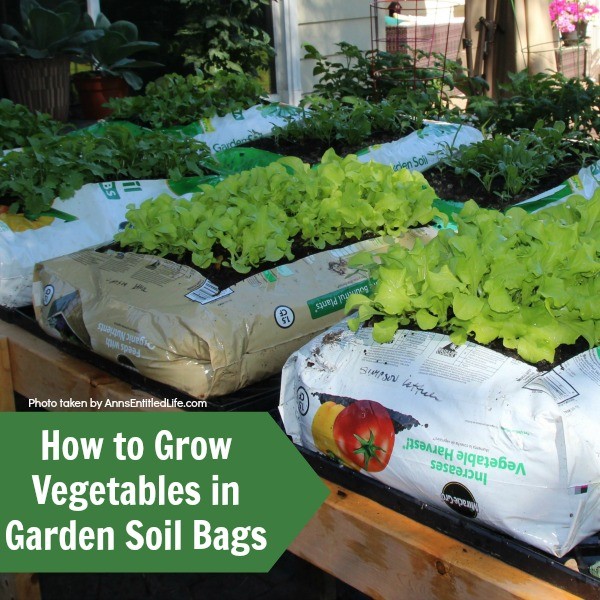 Would I grow like this again? You betchya. I already have the seeds for this year (more lettuce and mustard greens). Since we had too much lettuce (seriously, people were avoiding us for a while, and yeah, I am blaming it on the lettuce “gifts”) I am going down to 5 bags of soil from the 8 I had last year.

If you are looking for a lighter work vegetable growing option, this is it. Once I plopped down those bags and seeded, I basically watered and harvested, and that was it.