Hubby has long wanted me to write a post about the wonders of his immersion blender. Hmmmm let me back up a bit… in the Ann’s Entitled Life household, Hubby has done the vast majority of cooking since we got married. Hubby is an excellent cook. Part of his undergraduate curricula included cooking, and he has always had an interest in good food and cooking. Since he was in his mid-30s when we got married, he had to cook for himself a lot of years, either that or go out to dinner.

I am a very plain cook. No sauces, few herbs, and spices – I like to think of it as allowing the natural flavors of the food to come out.

Hubby very much like sauces, herbs, and spices, and he is happy to experiment with his cooking.

I tolerate all of this and even clean up after his (atrocious) kitchen messes because – hey, I don’t have to cook!

Hubby is also a gadget guy. If there is a gadget for a job, he buys it and uses it. I think kitchen knives are multi-tools; he has a heart attack if I scoop ice cream with a teaspoon instead of an ice cream scoop. Sometimes, to get a rise out of him, I purposely misuse a tool or kitchen utensil to watch him gasp in horror. You never saw my Hubby move so fast as when he is aghast at how I am misusing a tool and wants to “teach” me the proper way to use it. Usually, I am laughing so hard by the time he gets to me that even if I really didn’t know how to use said tool (99.99% of the time I do), he wouldn’t be able to capture my attention to teach me a thing.

It’s the little things that make for a great marriage! 😀

Hubby has over the years accumulated some really interesting and unique kitchen and power tools. And sometimes a kitchen power tool. Like today’s Waring Immersion Blender I want to tell you all about that he uses to mix and puree soups and sauces in a giant pot. Hubby frequently makes double batches of soup so he can share with my grandfather.

This is the immersion blender Hubby has (the 12″ size): Waring Commercial Big Stix Immersion Blender An immersion blender (or stick blender) will blend ingredients or puree food in the pot or pan in which they are being prepared.

YAY! I swear there is a youtube video for everything. Hubby’s Waring Immersion Blender is a 3 speed, 12″ stick that easily comes apart and clicks together. Clean up is simple. Truly simple. He ended up with the Waring Commercial Big Stix Immersion Blender after a lot of research. He had burned out a few home-use-immersion sticks (in the $75 range) and decided to just bite the bullet and get a commercial grade immersion blender that would last forever.

I will say that he uses this very frequently. Several times a month at least! 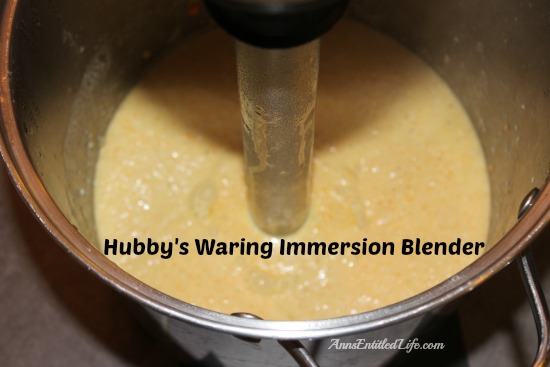 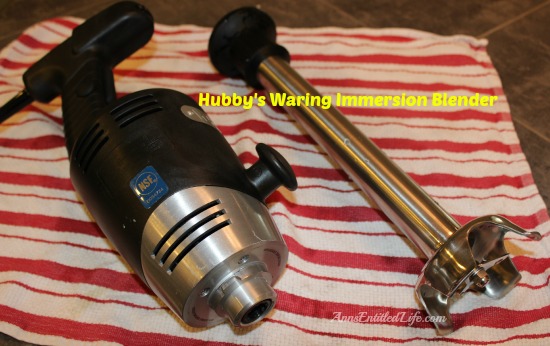 Hubby can control how smooth or chunky he wants his soups. He can also control the speed – the 3-speed function really is nice.

If you like gadgets or make a lot of soups, the Waring Commercial Big Stix Immersion Blender may be for you too!

(Believe it or not, this was not an infomercial, and sadly, Waring didn’t send us a thing.)

Do you have an immersion blender? If so, what do you have? How do you like it?