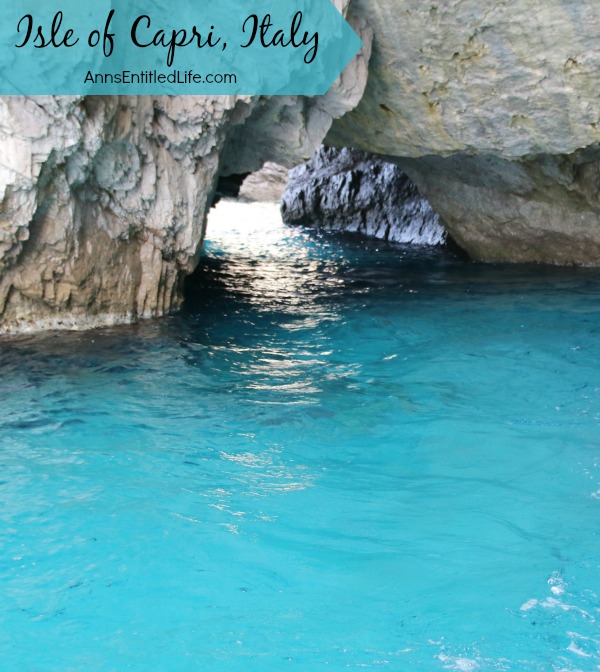 Hubby and I took a trip to Europe this past May. We visited parts of Italy and France. We landed in Rome, toured the Vatican, and the following day took a local commuter train down to Sorrento, Italy.

Hubby has always wanted to see the Amalfi Coast (photos to come). When traveling to Amalfi, we could have made Rome, Naples or Sorrento our home base or the town of Amalfi itself. We had originally booked in Naples (because we could use our Starwoods points for a free hotel), but the more Hubby researched, the more he decided that Naples wasn’t the “feel” we were after. And just passing through on the commuter train, I think Hubby made a good call.

He settled on staying in Sorrento, Italy. And wow was that an excellent choice! We used it as our base for Capri, Amalfi, and to enjoy the town of Sorrento. One other great destination would have been Pompeii. 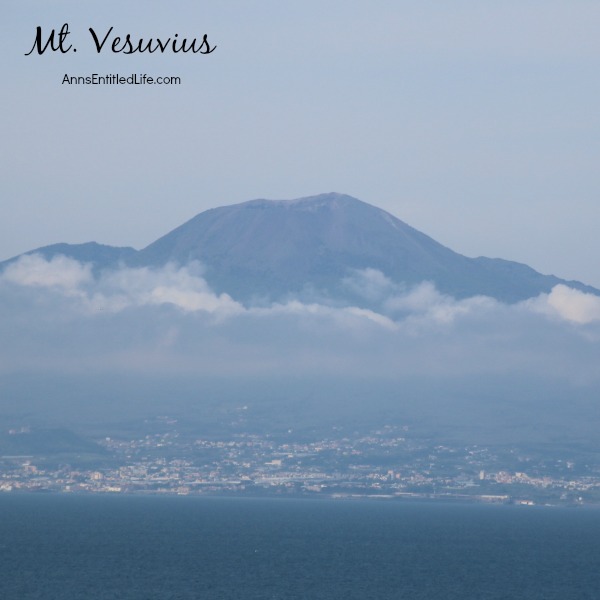 That’s a photo of Mount Vesuvius, the infamous, active volcano located on the the Gulf of Naples. That photo was taken from the root-top restaurant of our hotel in Sorrento. Notice the population at the base of the volcano? Approximately 3 million people live in the active-volcano’s path!

Mt Vesuvius is a sight to behold… so large, it took me a few moments to realize what I was seeing. While we didn’t go to Pompeii, we were told it is amazing from a historical perspective. They do let you walk all over, and you can touch as well as observe. 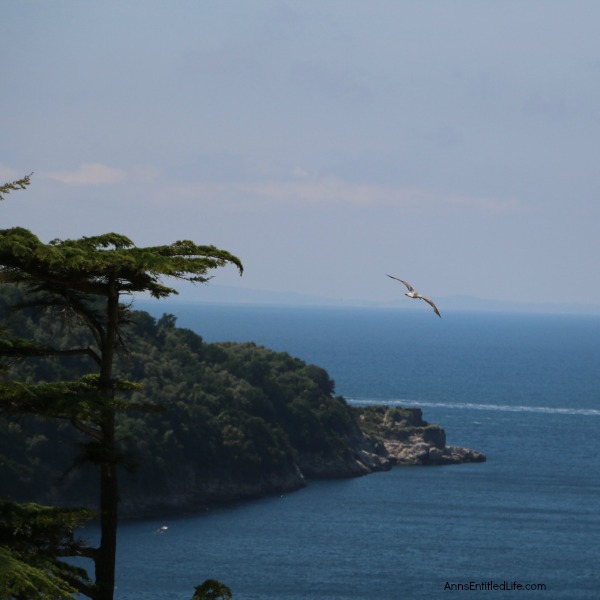 That is the view to the left of the roof-top. Just beautiful.

And even though we spent the bulk of our time in Sorrento, and enjoyed the town tremendously, that was basically it for photos! Hey, sometimes you have to live the moment instead of record it.

Sorrento is a very safe town. There are eyes everywhere via street cams. There is also only one road in or out of Sorrento, so a thief would have trouble picking pockets undetected, and then getting out of town prior to that detection.

We walked everywhere in Sorrento. The town is fairly compact, well laid out, and has retail that is both high and medium-end. The food was outstanding! We had dinner at a different restaurant each evening (lunch was out in the village we were touring), and nowhere did we have a bad meal.

That one-road-in-and-out is a positive and negative. While keeping Sorrento fairly small, beautifully Italian and quite safe, it also makes it difficult to access. You could take a bus or a boat, and the ferry from Naples was mobbed (the ferry is HUGE) the day we went to the docks to catch a ferry to Capri. The other choice is the local commuter train. The train in took about 90 minutes and was fairly crowded. We were glad for our one bag, once again. On the way out we had a bit of dumb luck and caught the express train. That was less than 50 minutes, started in Sorrento and ended one stop past Naples. Very easy.

Also, practically everyone spoke English. Our tour guide in Amalfi told us it was due to an American base during World War II, and many the soldiers staying behind to marry locals. Whether true or not, it made for a colorful story. And an English-speaking-friendly town! 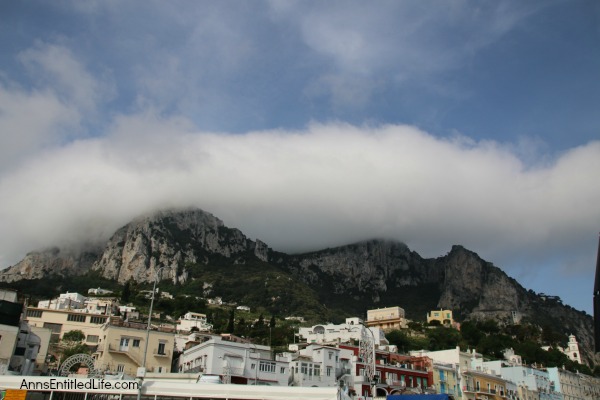 Hubby decided we needed to get out early to take the ferry to Capri. The problem was we got out so early from our hotel that we couldn’t take the elevator down to the ferry and had to take a 20 minute walk that was steep enough for mountain goats!

The fog had not yet burned off the isle when we arrived. 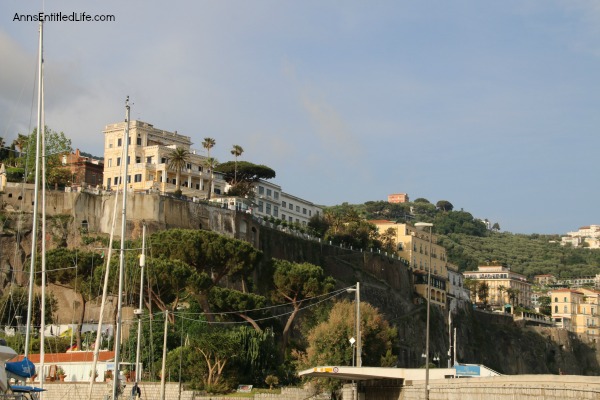 The first thing we decided to do was take a boat ride around the island. Excellent decision! We didn’t want to do the Blue Grotto. We were told the wait was very long (and the photos below will prove that true). We also wanted to beat the boat-crowds, which we did.

Capri has two towns: Capri and Anacapri. The “first level” is Capri and it looks TERRIBLE. Imagine the worst bargain-basement bazaar you have ever been to, and take it outdoors. Just an awful first impression of the island. 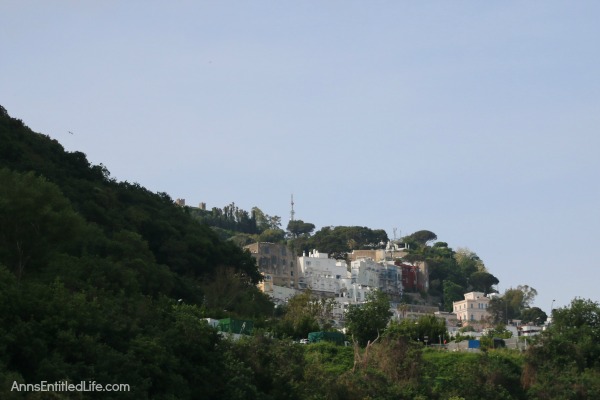 We took the tram up to the “second level”. This level was full of super high end shops. Think of any cruise port you have ever been to (because Capri is a big destination for those on Mediterranean cruises), and that was exactly what the second level of Capri looked like – on a steep incline.

To get to the “third level” we took the bus. That is Anacapri and it was delightful! Decidedly cooler and less crowded, we spent some time at lunch where a very nice restauranteur gave us his restaurant’s recipe for limoncello! I will make it for a Friday cocktail recipe as soon as lemons go on sale. He did tell us that all the limoncelloes in the area were individual recipes. So while the limoncello you may purchase in the liquor store is from Sorrento, Italy, the people in the area all make, and drink, their own limoncello creations.

If you ever have the opportunity to visit Capri, for the ride down, take the bus. It is the same price to go all the way down from Anacapri to Capri by the docks as it is to go from Anacapri to the tram. If you do it this way, you have to pay for another tram ticket. We walked up two stops from the town center (one from the restaurant), and got on the bus easily. Once the bus arrived at the town center there was not enough room for all waiting. The buses ran approximately every 10 minutes, so it could make for a long wait.

Now on to our boat tour…. 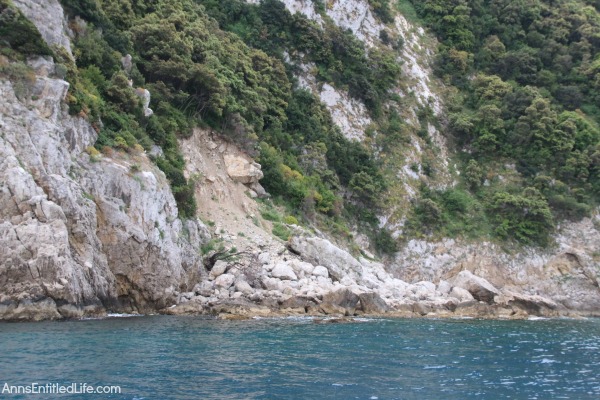 The boat tour was fabulous. If I have one regret, it was not doing a smaller charter boat and taking 3-4 hours to go around Capri. The island is that beautiful and interesting. 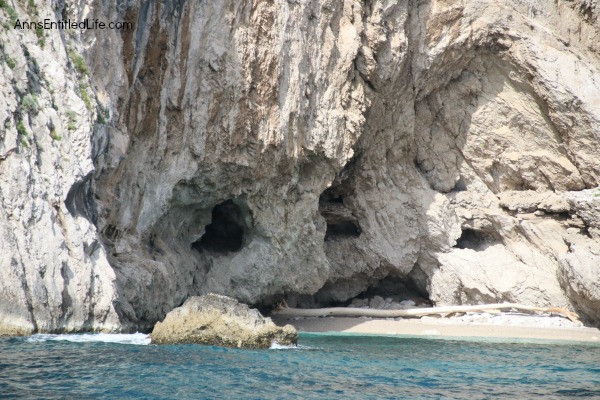 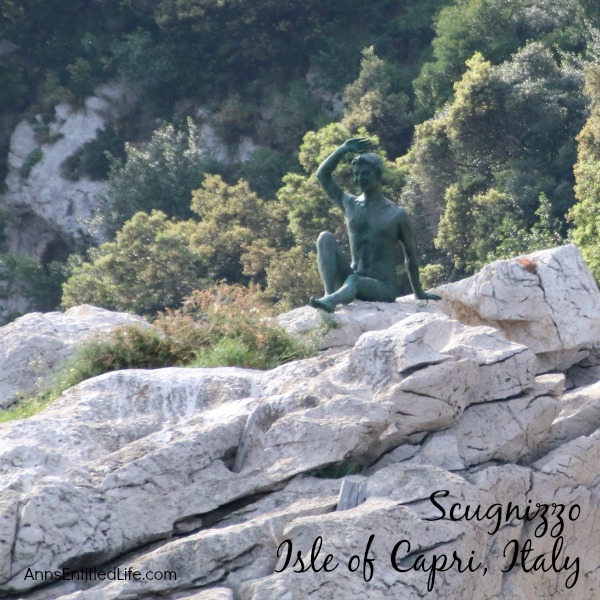 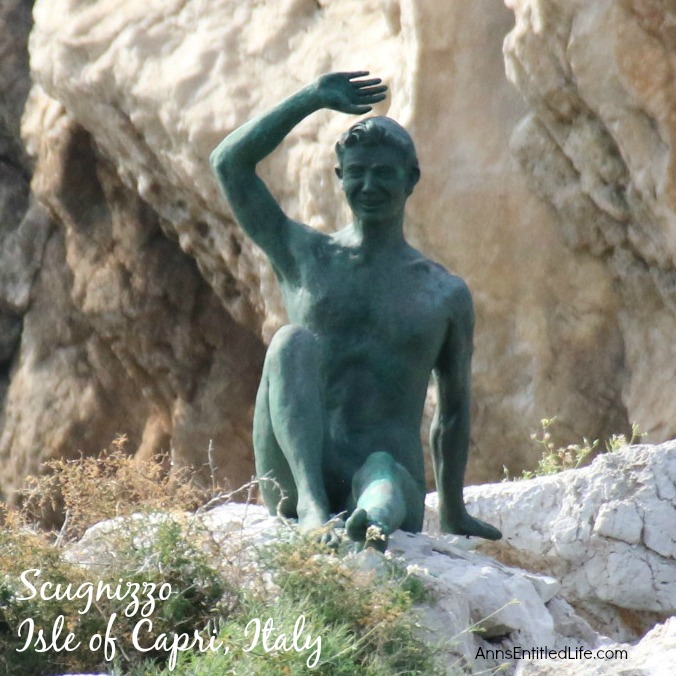 The Scugnizzo is a bronze statue of a young boy with a welcoming wave, greeting seafarers going to the island, and waving them good-bye. 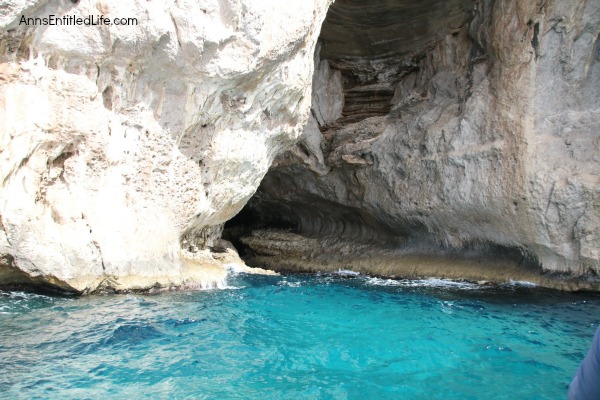 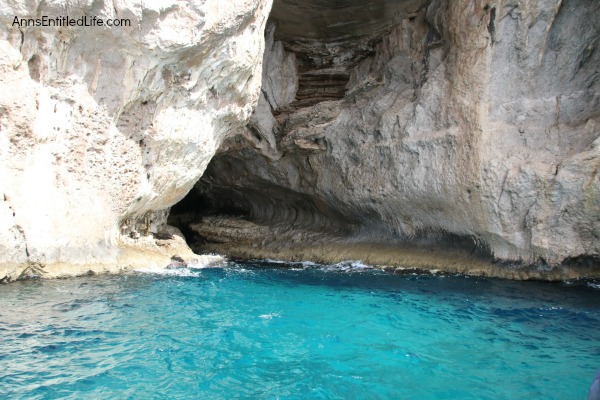 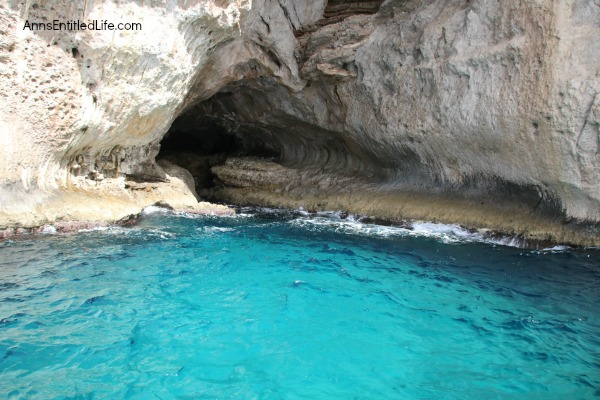 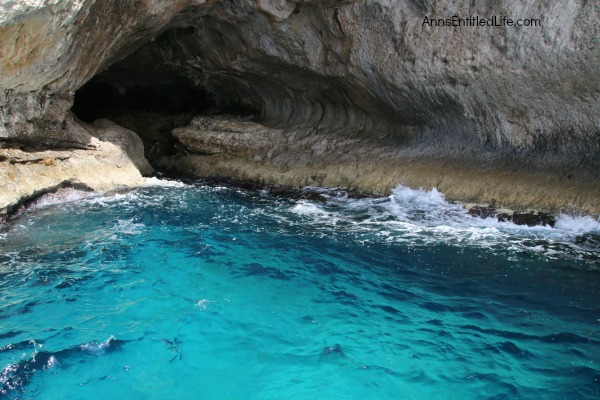 So we approached these big ole rocks that are called Faraglioni – stacked rocks in Italian.
(This is actually a departing photo… I didn’t have an arrival picture of the three!) 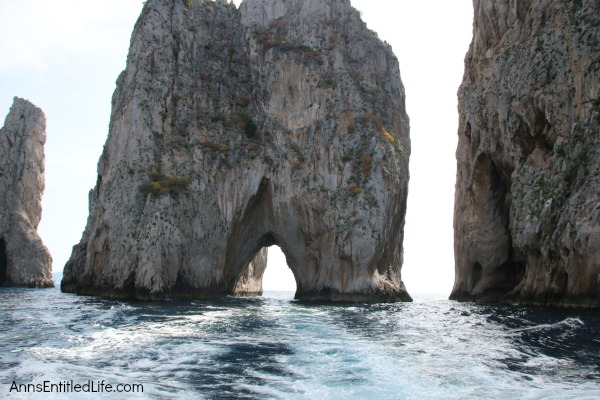 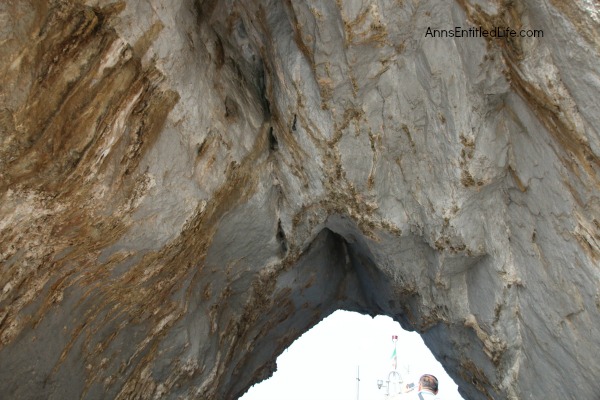 We passed through the opening in our tour boat! 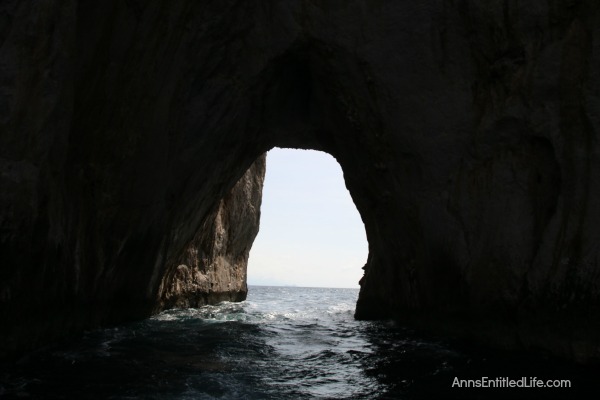 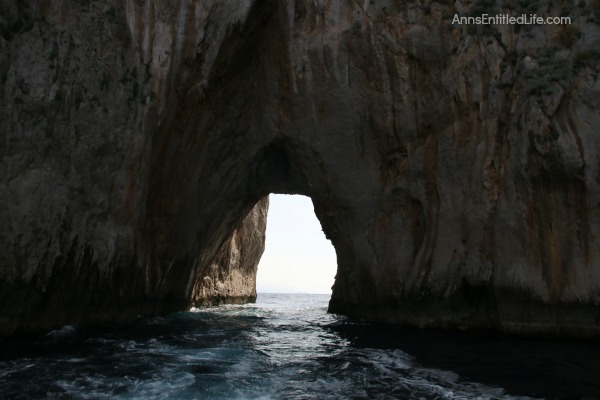 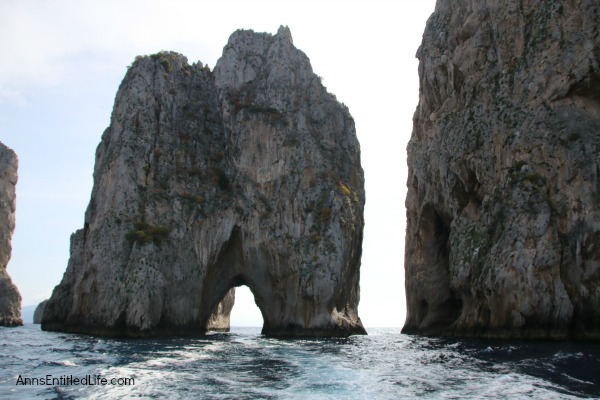 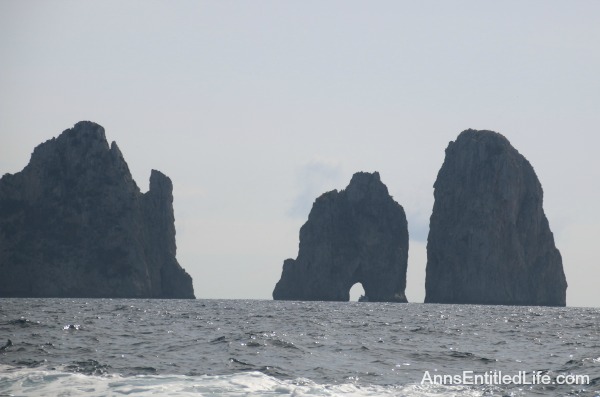 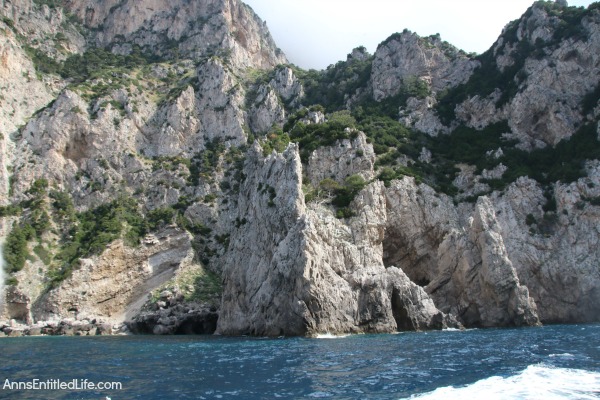 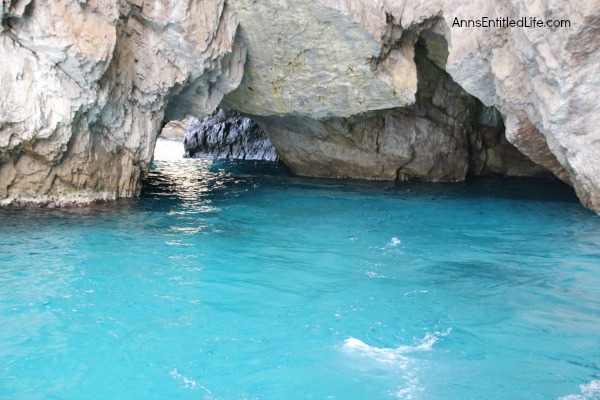 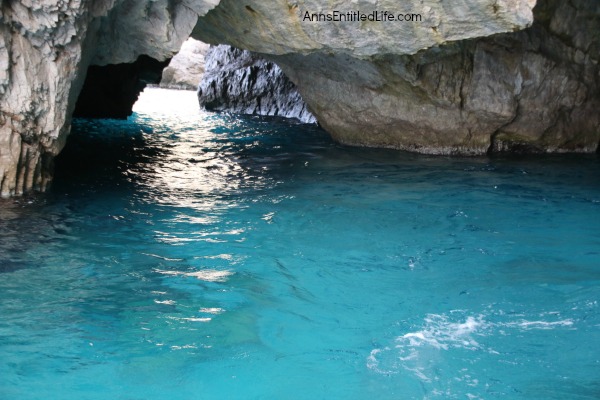 I nearly decapitated myself taking these photographs! I was so thrilled to get them! (I have probably 40 more. LOL)

We sat in the back of our tour boat because… why not? BEST DECISION OF THE DAY!! Whenever we approached a grotto or could get close enough to land, the boat would do a U-turn and we got a great view. 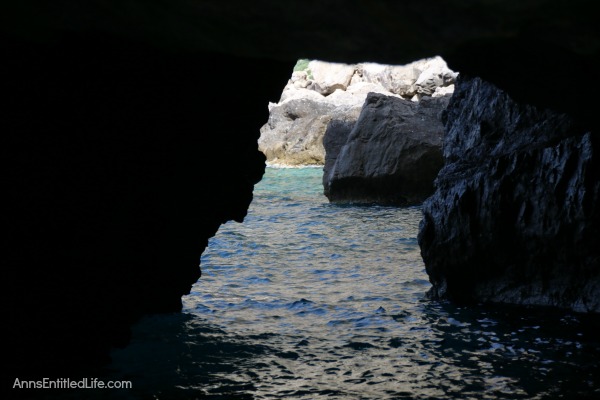 Well, on this grotto, the tour boat operator actually backed up! We could have stuck our hands out and touched the rocks, we were that close! 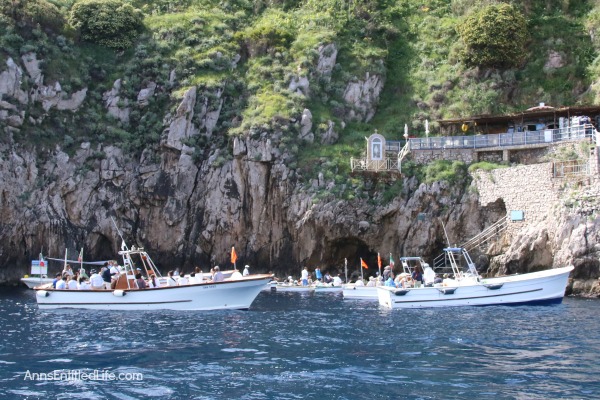 As we were coming around to dock, we noticed a lot of boats hanging around the side of a cliff. Turns out it was the entrance for the Blue Grotto. 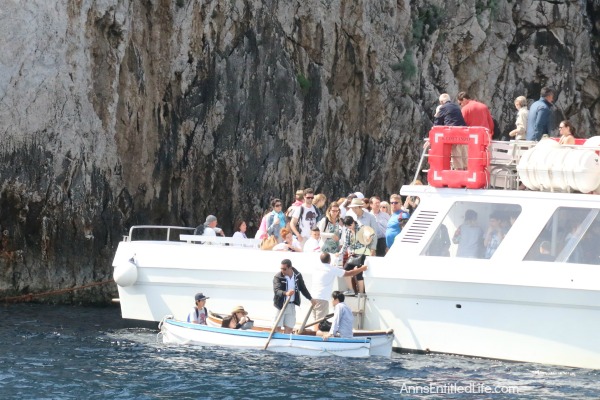 You anchor and wait your turn to get into a small rowboat. Then, you wait your turn to be rowed into the Blue Grotto. You then take a photograph, and get rowed out. The boat tour guide (who also does Blue Grotto tours) told us 2-3 hours of waiting for a 2 minute glimpse. Yikes. When we heard that, we were glad we took a pass.

While Hubby and I enjoyed Sorrento very much, Capri was meh. It was beautiful, but crowded with tourists. There were a few sites, and the highlight was definitely a boat tour around the island. We are definitely glad we went to Capri… once… but we wouldn’t go back.

Next up, the Amalfi Coast!