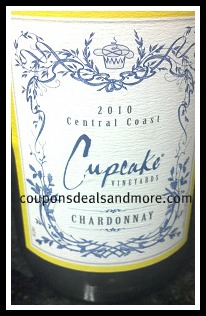 I have been intrigued by Cupcake Chardonnay ever since I saw the label. So, when I saw it for under $10 a few weeks ago, I decided to finally give it a go.

The Chardonnay was crafted to emphasize the Central Coast’s crisp and vibrant Chardonnay character. A malolactic fermentation was used and then left the wine sur lie to create a wine that is both rich, full, creamy, toasty, and soft.

First let me tell you that four of us tried the Cupcake Chardonnay. I was the only person to finish a glass. Ok, I finished the bottle. No one else cared for it. Hubby called it more of a New York State Chardonnay than a California, and it is indeed a California wine. It is not buttery, nor is it fruity. And the last thing it reminded me of was a cupcake.

Pale yellow in color, the nose is vanilla, and I got mild vanilla while drinking. There is no bitter aftertaste I usually associate with a non-buttery Chardonnay. They claim barrel aging but if it was indeed barrel aged, that barrel was made out of stainless steel. I had zero oak tendencies from this bottle.

I have mentioned before that many Chardonnay’s blow up my left leg from the sulfates. The Cupcake Chardonnay did not have any adverse effect on me, which is always a good thing!

For myself, I would buy this again for the “right” price. I would never buy to share though because of the dislike of 75% of the company that tried, and did not care for, the Cupcake Chardonnay.

Have you tried the Cupcake Chardonnay? What did you think?