If you follow Ann’s Entitled Life on facebook… or twitter … or Google+, you read me complaining about the wildlife in my back – and front – yard the last few weeks. I feel like Marlon Perkins would be right at home in my neighborhood.

As I’ve mentioned before, I live in a large town in a well settled subdivision. My house is close to 40 years old. Sure the area keeps getting more and more developed leaving the wildlife less and less space, but come on – my subdivision is 40 years old! Shouldn’t they have moved on by now? There’s a nice plot of cow pasture just up the road a bit… 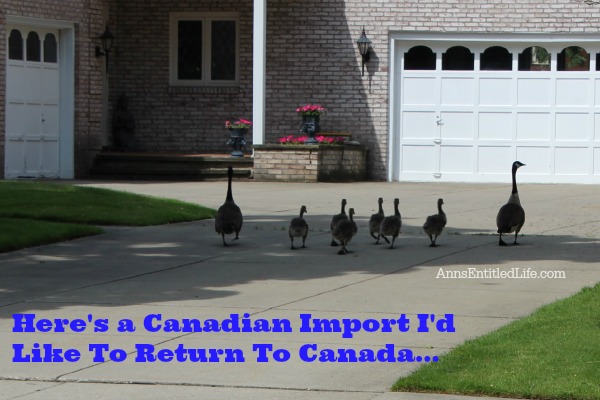 Last Tuesday I looked out the front door and noticed this family of geese picking at the front lawn. Worms? Bug? I don’t know, I just want those super-poopers gone.

I walked out the front door to chase them off, and the whole lot of them started to move but paused at the curb to look both ways (really regretted not grabbing my camera before I chased them off when I saw that!), crossed the street and then started picking at the neighbor’s lawn.

So, I went inside to get my camera, came back out and they moved quickly to the pond behind the neighbors house.

I thought that was that.

I really should have known better.

On Thursday I was sitting at the kitchen table and I heard “chirp, chirp”, pause, “chirp, chirp”. This repeated a number of times, so I went hunting for the sound as it seemed quite loud, and fairly close.

Now we have mesh over the chimney opening that vents the fireplace, but of course all I could think of was it got a hole in it and a bird came down the flue and was now sitting in the fireplace in the family room. And I knew I was going to freak out if that happened. 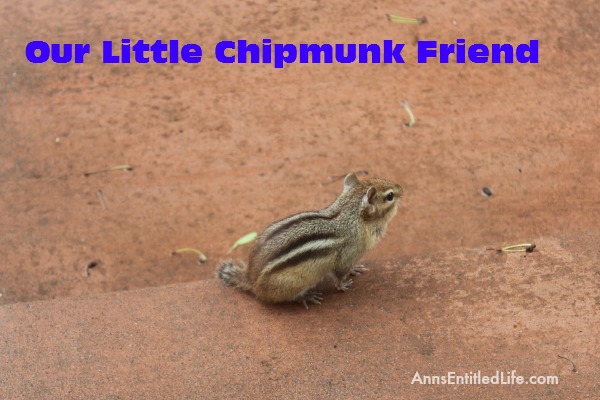 At this point Max comes over to investigate, sees the chipmunk and starts barking like a mad-dog.

Evil woman that I am, I let Max out the kitchen slider, and he dashes like a mutt on a mission to the spot where the chipmunk is (was) chirping.

I decided to call Max back in, mostly because I rethought my bright idea to let him out, and was terrified he was gonna get the poor thing. I made sure Max opened his mouth before I let him in the house though. I didn’t want any “presents” of the rodent variety laid at my feet.

To take Max’s mind off the chipmunk, I went out the front kitchen door to collect the garbage cans… and what do I see on the front lawn!? Four geese and six goslings!! At this point Max comes to the front kitchen door to see what is going on outside, and again starts barking like a lunatic. Those geese started moving like the hounds of hell were after them, and if Max could have gotten out the front door, at least one hell-hound WOULD have been after them.

I usually let Max loose after the geese once a year and then the geese stay off the street the until the following year. However, we’ve never had a family with goslings before. While they are no longer tiny (and cute), I am not sure they’d be able to outrun Max (or fly away), and so I am afraid to allow Max out to chase them off. This might be a case where the parents turn around hissing and angry and Max would take exception to that, and feathers and dog hair would soon fly.

Soooooo, anyone know anything about goslings? Could they out run a loony dog (or can they fly that young)?

BTW, on our walk the next day they saw Max long before he saw them, and scurried off to the safety of the water. In case you didn’t know it, geese are dirty, disgusting super-poopers. They really need to move back up north.