To tell this tale, I have to back up a few weeks…

Hubby and I are doing/having done a long list of home renovations this year. I decided to chronicle them (like a diary) on Ann’s Entitled Life, so that includes not only detailed descriptions on the process, but photographs to share and for me to remember the before and after, as well as the process.

Sonny-boy came over a few weeks ago before we went out of town to help us move the last of the furniture out of the living room and office. Once we had it all tucked away, I naturally took pictures.

Sonny-boy looked at me while I was shooting photographs and turned to Hubby and asked, “Why is she taking pictures?”

Hubby immediately (and vehemently) replied, “Because our whole life is blogged online.”

I ignored them both and kept snapping away (this is gonna be some series when these floors are finished!).

So wouldn’t you know it!? When Hubby pulled another completely idiotic move with a sharp instrument, instead of grabbing the camera and photographing said stupidity, I cautioned him to be careful, and told him to stop. I was afraid he was going to hurt himself – or more likely the house!

Last Thursday we had torrential rains come through. When I came home from picking up our CSA share, I noticed water on the kitchen counter. I looked and traced the water entry to the left side window!

Ut oh… another window to be replaced, or at least re-glazed?

Our gutters are in sad shape. We are scheduled to have all new gutters and a new roof done sometime soon. It depends on how backed up the roofers are with all the rain. Hubby theorized that the gutter overflowed and the sheer volume of water flooded through the window seal as the gutters overflowed to the bottom window ledge (it was a LOT of rain).

When the rain started up again a few hours later, we could see it pouring over the bottom of the kitchen window ledge just like a waterfall, or more accurately like someone was holding a fire hose on the window. I ran inside, and sure enough water was slowly seeping in.

Hubby and I looked at each other and I said something like, “Too bad you can’t poke a hole in the gutter and let the water drain out.”

Hubby responded, “Way ahead of you…” and went to the garage.

He comes into the kitchen with an axe!

After some discussion about the state of his sanity, Hubby went outside in a pouring deluge and used that axe to make cuts in the gutter giving the water somewhere to pour out of, instead of just overflowing. 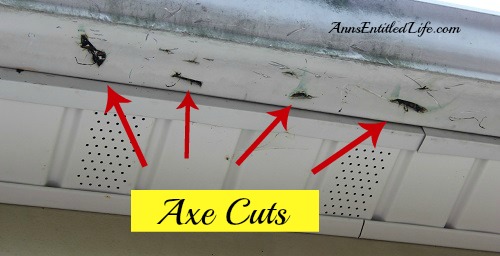 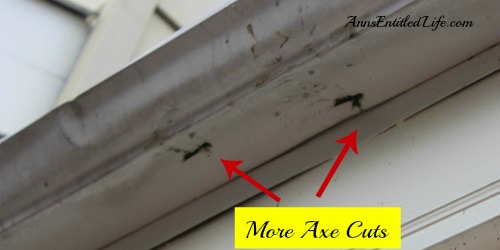 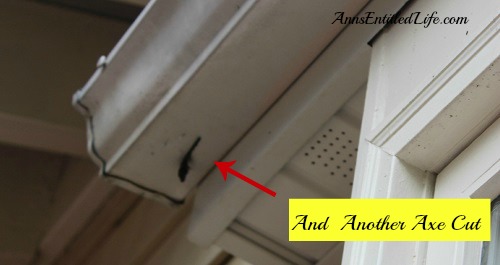 He of course was thrilled with his little plan, and gratified to say, “I told you so!” when his idea worked.

*sigh* The difference between men and boys…

I made him remove his sneakers and socks outside, and he took off his shirt and wrung it out like a wet dishrag! I have never seen someone so wet who wasn’t swimming or bathing.

While I would never advise anyone to hack a hole in their gutter to relieve overflowing, I will admit it worked. Next time though, I’ll be sure to grab the camera first, and express concern for Hubby’s safely second. This was an incident I will never forget.