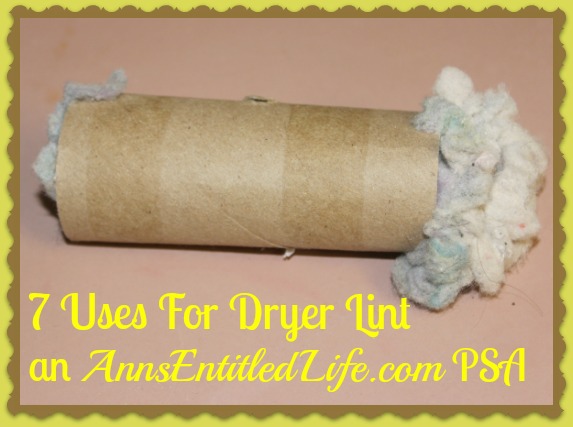 I was searching through old documents on my computer, and came across my 7 Uses For Dryer Lint post. I decided to post it again as Hubby and I just had the Florida condo duct work cleaned, along with the condo dryer vent.

I have always said that you will never read “7 Uses For Dryer Lint” on my blog, and in spite of the title, you’re still not going to read about 7 uses for dryer link here.

You see, dryer link is extremely flammable, so there is, in my opinion, only one safe use for dryer lint: as a fire-starter.

Sonny-boy is an Eagle Scout. If you have a Boy Scout in your family, you know these boys love, love, love to camp. And one of the draws to camping is learning the various ways to start a fire. When Sonny-boy camped they used to take empty bathroom tissue or paper towel rolls and stuff a bit of dryer lint inside, leaving one end dryer lint-free (the photo above shows lint on both ends for image purposes only). They would then light that dryer-lint-free end and then use the flaming lint-roll to light their kindling while fanning the flames. They also used to light these fire-staters and toss them into the fire to see how fast they would go up in flames. Ah boys…

Because dryer lint is so flammable, people are advised to use metal venting from the back of the dryer to the outdoors, as well as to clean out the venting regularly and make certain the vent outside is not blocked. We’ve all heard of dryer fires and how quickly they can spread, so do take the time to check your venting to make certain the dryer lint has not clogged your venting up.

Do you check the venting in your dryer frequently to make certain it is not clogged?