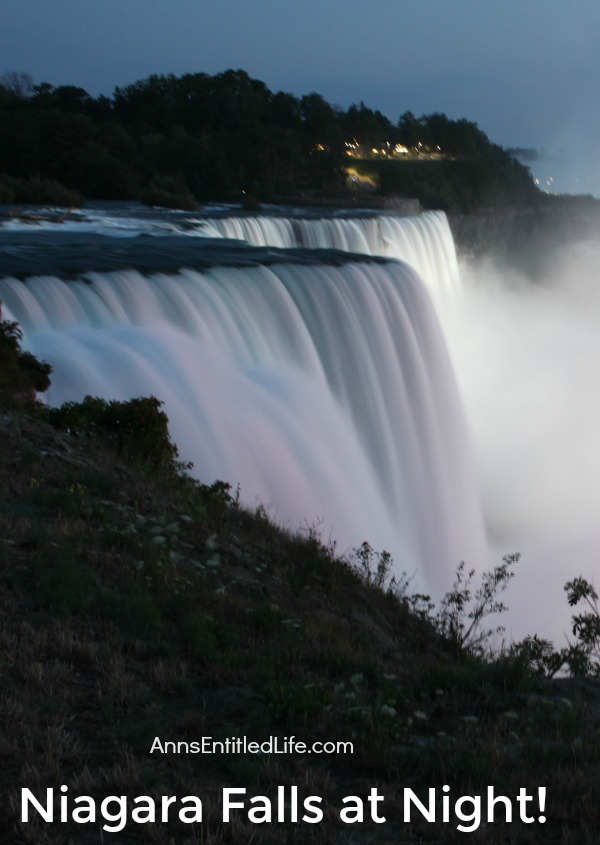 Every evening the Falls are lit with color. It is truly a beautiful sight. This post has many photographs of Niagara Falls, NY in the evening. These are summer night photos.

When Hubby and I went to the culinary school last week for a cooking class, I knew I wanted to take advantage of being down the street (literally) from the Falls. The class was scheduled to end at 8:30pm, and the lights come on at the Falls at 9pm. It was a no-brainer.

Well, the lights did come on at 9pm, but our class got out about an hour early. That means a bunch of these photos of Niagara Falls are just before dusk, and not just at night.

I also took the photographs from the same area I took winter, spring and summer photos from in the past. The shots from Goat Island of the Bridal Veil and opposite side of the American Falls were taken in the fall. We did not go over there this time.

The schedule lists rainbow colors. I took photos of the lights coming across, and er, apparently some of the bulbs were burned out? There wasn’t a rainbow – at least not that I saw or photographed. The only thing I can think of it all the lights were not on before 9:30 when we left? (It isn’t like there is loads to do in the park at night, so you don’t stick around that long.) If we take another cooking class, I will give it another go (the lights begin at 8:30pm starting this weekend).

I honestly don’t think we stood in the best place to observe the colors. We probably should have taken the time to walk up the Observation Tower. It would have been a better view. The lights we saw were white, red and blue. Now, because this is lit from the Canadian side, the best way to see the American Falls lit up at night is from Canada. You can walk over with your passport, passport card or enhanced driver’s license. The cost is 50¢ per person (each way).

Here are my photographs of Niagara Falls at night! At the end of this article, I put up a youtube video so you can hear the pounding of the water. Unfortunately, I recorded vertically instead of horizontally so the video storta stinks. 🙂 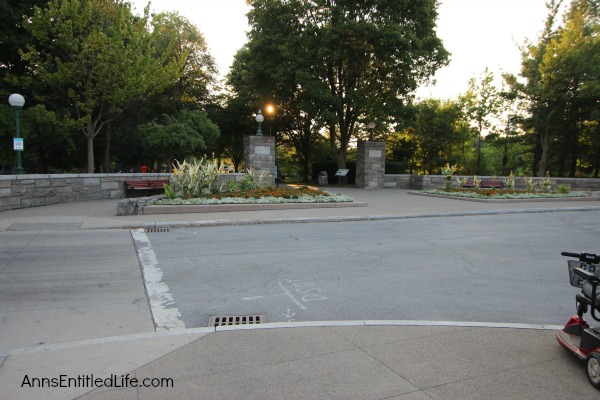 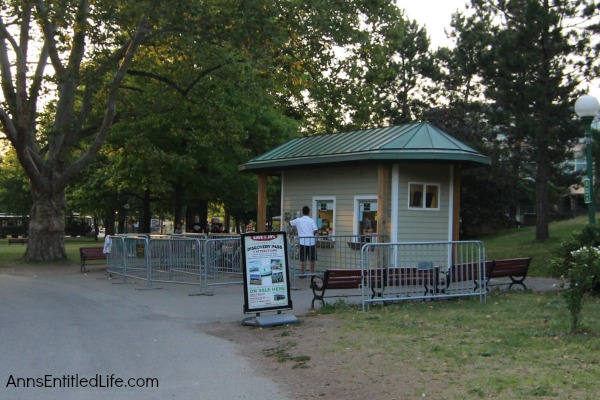 The stands are open! 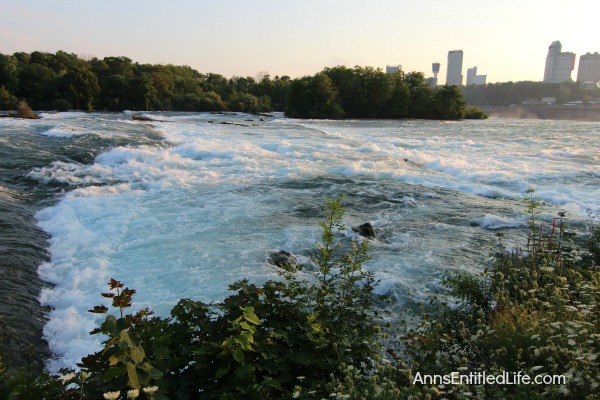 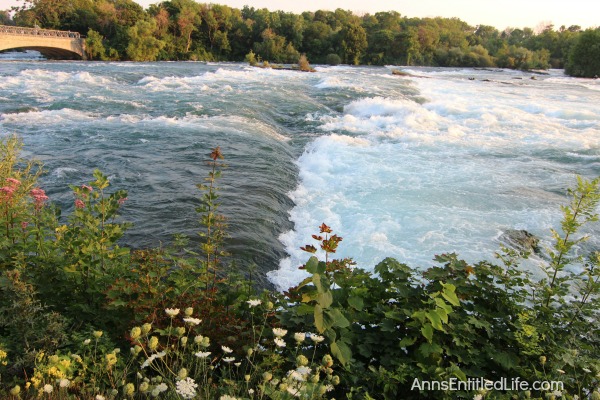 Wandering down we see the rapids. The bridge is the bridge over to Goat Island. 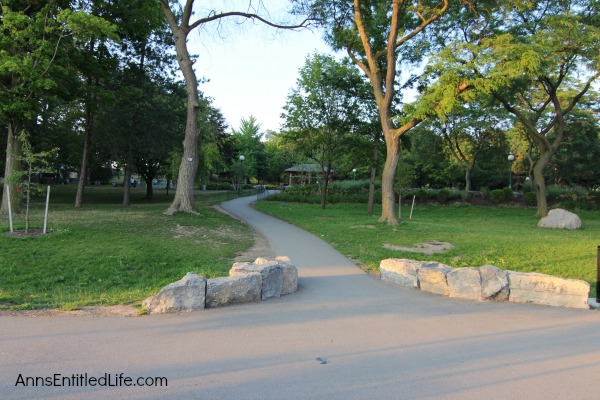 Wherever does it lead? 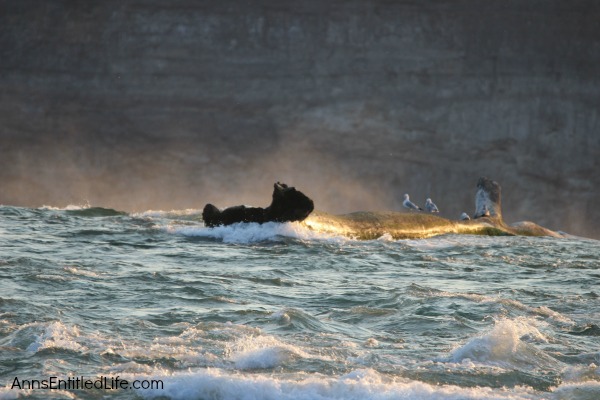 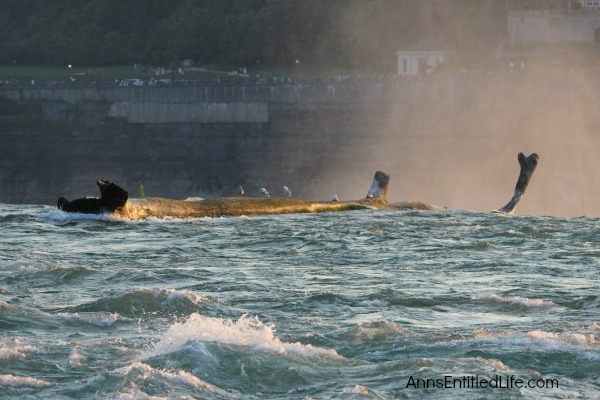 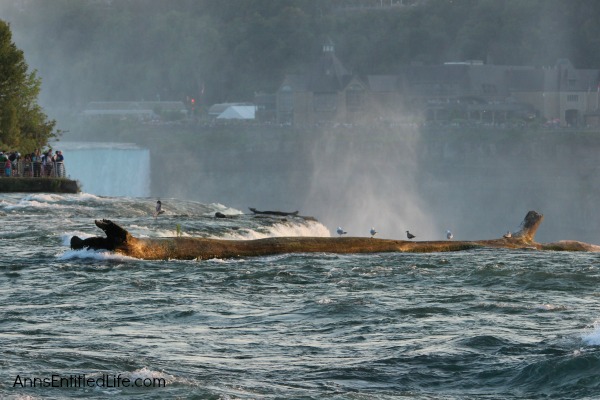 I have no idea why, but I was fascinated by this tree at the edge of the Falls and the birds using it as a rest stop. I swear I took 20 photos of this with 3 different lenses. 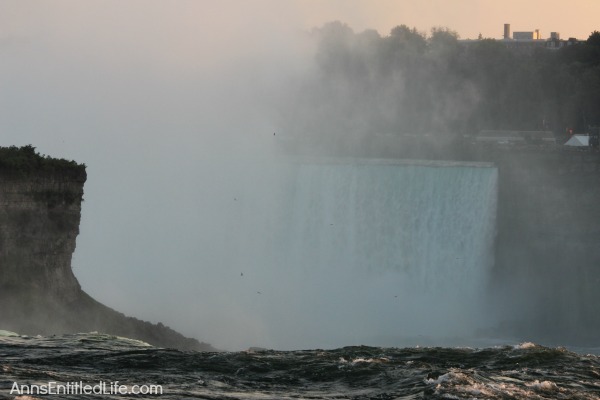 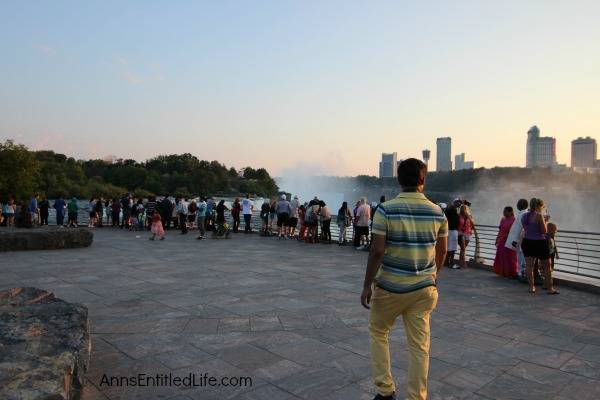 There were a bunch of people wandering around while waiting for dark. 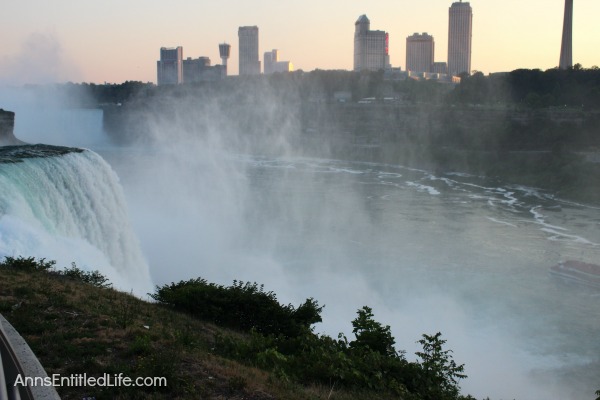 The mist coming up from the gorge basin. It was 90-something out, and let me tell you no one minded that mist at all that night! 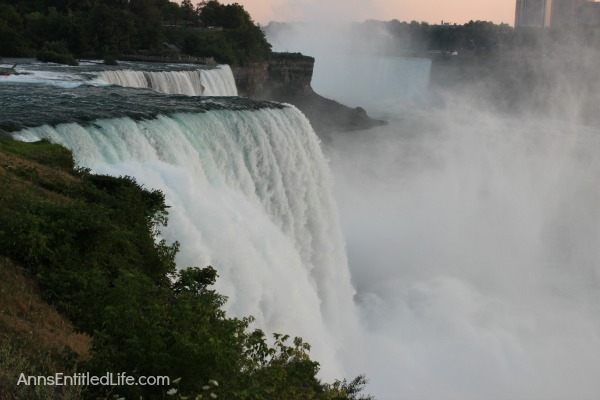 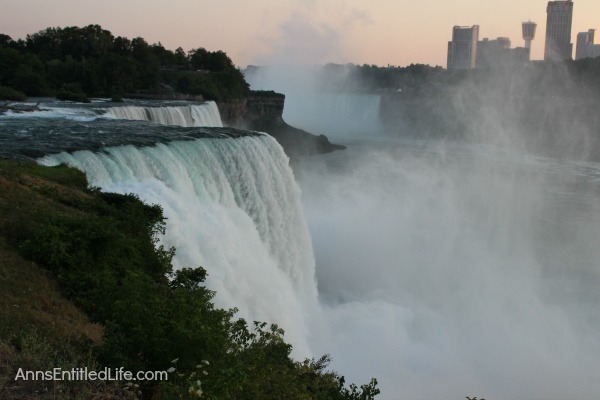 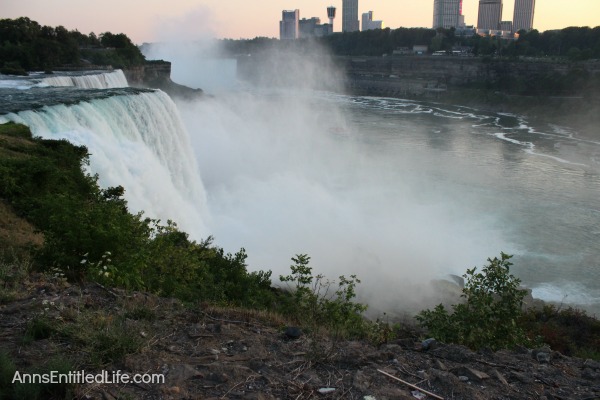 These were taken close to dusk. 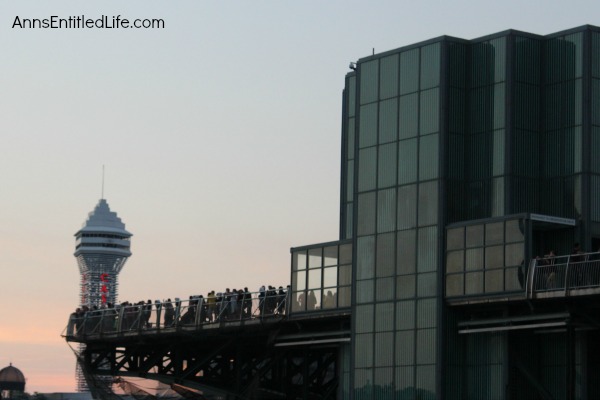 That is the Observation Tower we should have gone up to. Next time. 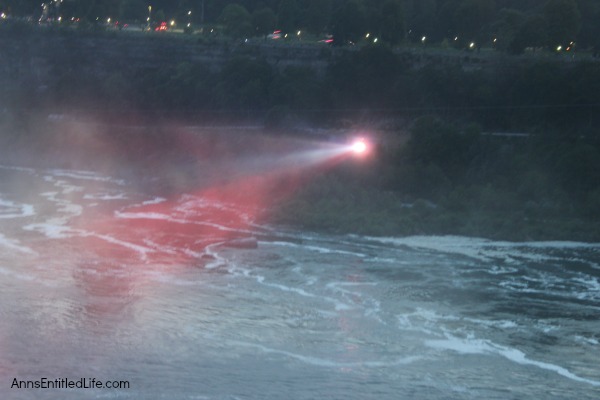 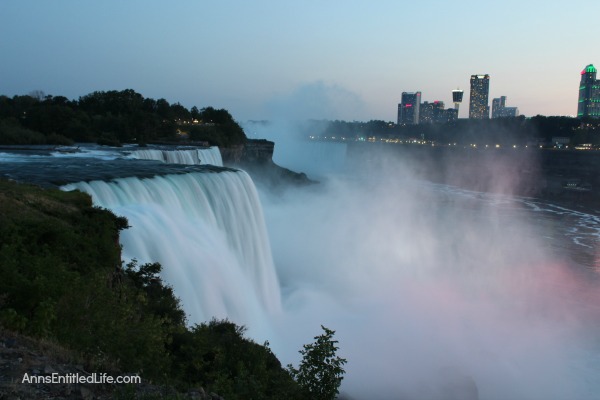 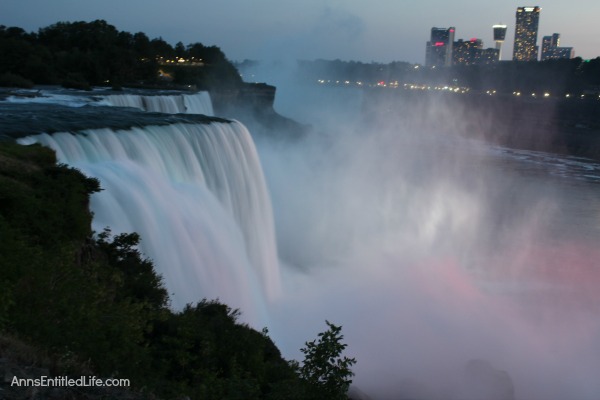 Even though it looks it, no filters were used in the taking of these photographs. 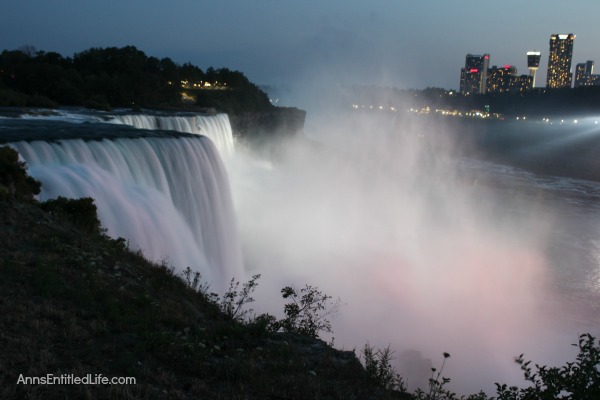 Just a few minutes later it is dark enough to see the lights shine. 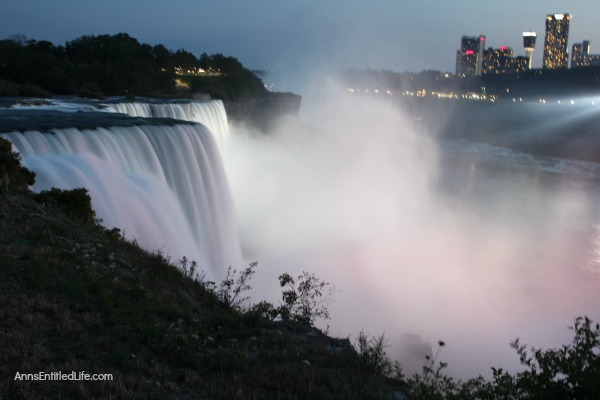 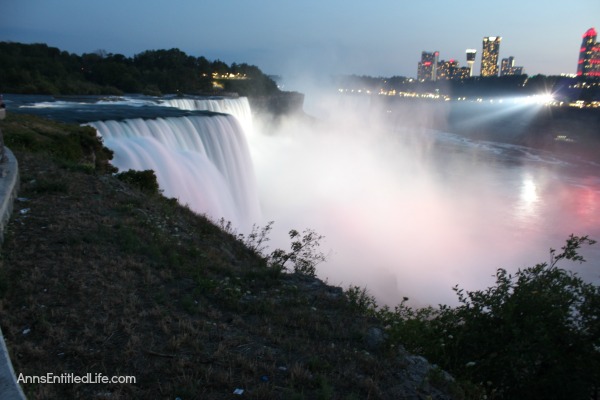 A better view on how the lights shine across and light up the whole area. 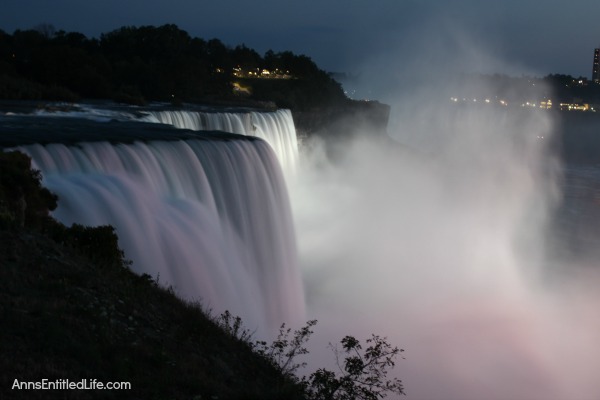 And we have dark. From our vantage point, we weren’t really able to get the full effect of the light on the Falls. The next time we’ll either schlep it over to Canada (probably not though, I like to do this all on the US side) or up to the Observation Tower (much more likely). 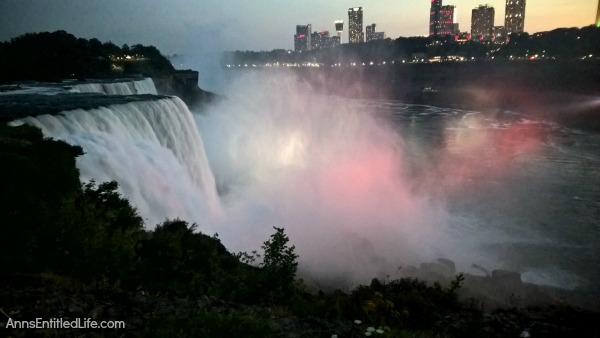 This one Hubby took with his cell phone. While not as sharp as my camera, it gives a different perspective to the gorge and the colors shining down. 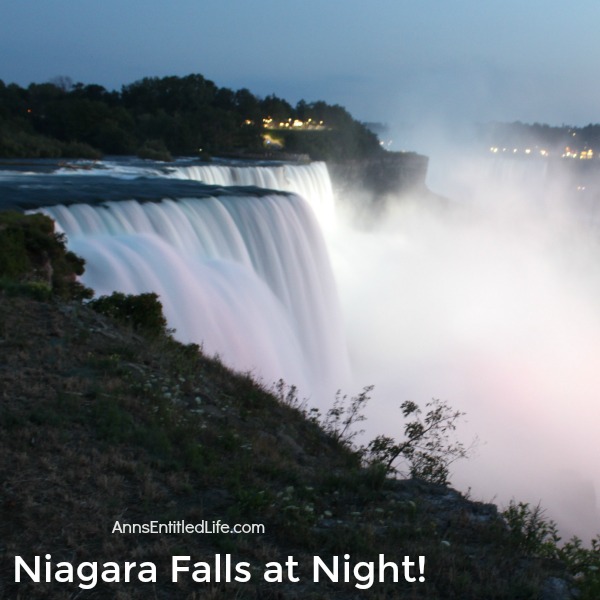