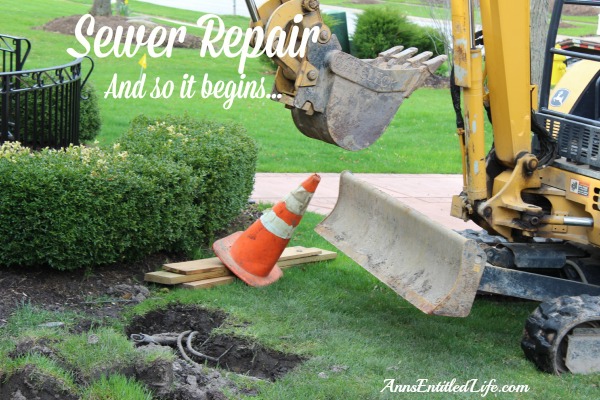 I mentioned a few weeks ago that we had had water in our basement while away in Florida. While the plumbers were performing some plumbing-CSI, it was discovered we had an issue with our sanitary sewer line. After putting the camera down the line, and hitting… something, a decision was made to dig and see what was going to have to be replaced.

There were a few things Hubby and I cared about:

● Since the cost was in the dig, we wanted anything and everything repaired that needed to be fixed. We were not concerned about saving $100 in parts when digging up the lawn (and possibly gardens) was where we were spending the big-bucks.
● We wanted this done sooner rather than later. The last thing we wanted to end up with was raw sewage in the basement.

So, on May 2nd I called the plumbers and asked them to go ahead with any repairs. 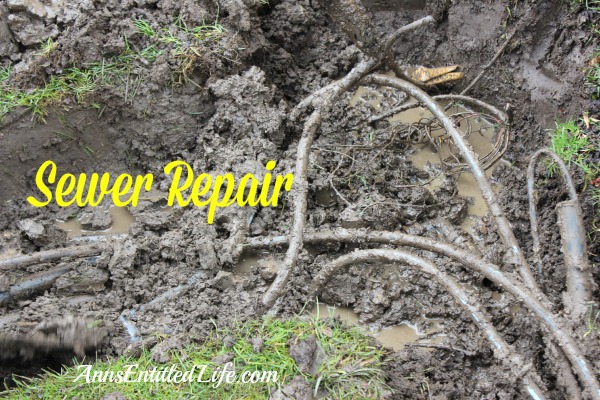 Our (wonderful) irrigation company came right out, clipped some lines and saved the box. This was to save us money on repairing the sprinkler system. 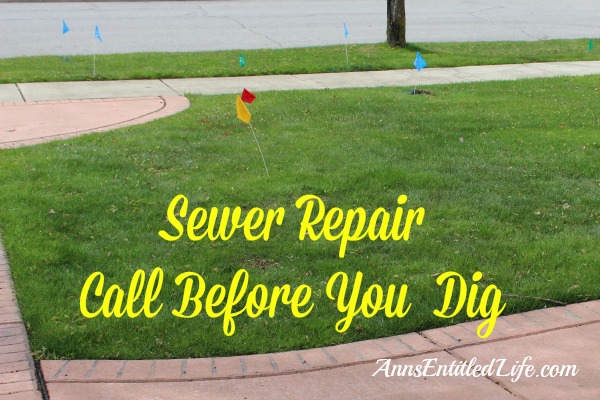 The plumbers placed a “Call Before You Dig” so all the utilities would come out and mark their lines. The utilities have 5 days to head out and mark after a request is made, and the plumbers had 10 days to get the work done after placing the call. Since all our lines are underground (including electric, cable and telephone), this was most important! 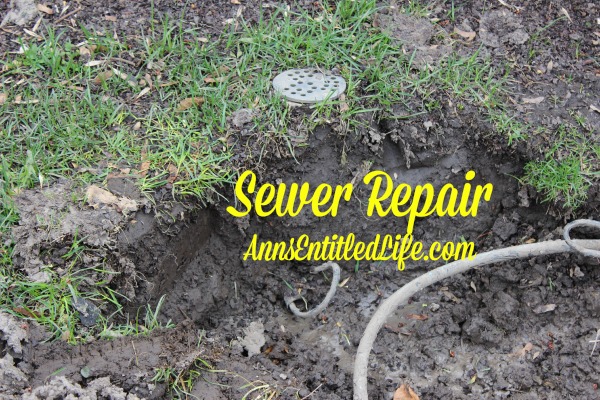 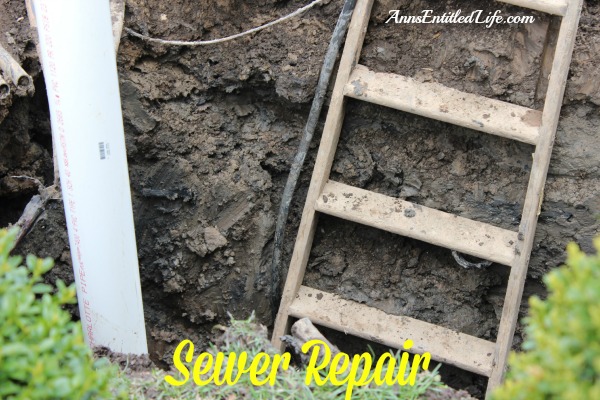 While down the hole, the plumbers visually looked at what was wrong, then sent the camera back down the line.

Basically, when the house was built in the 70s, they used concrete to hold the vent pipe in place. The concrete crushed the vent pipe. The plumbers claimed they had never seen anything quite like this, and speculated it happened immediately. While there was never a sewage back-up into the house, if the soil or rocks (broken concrete) shifted and blocked the sanitary sewer line, we could have had a back up. 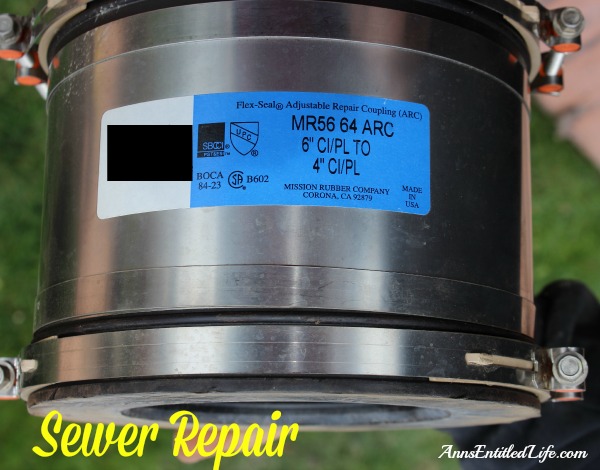 The solution was this mission coupler. As I understand it, it connects the sanitary sewer and vent pipe. Now everything is up to current code! 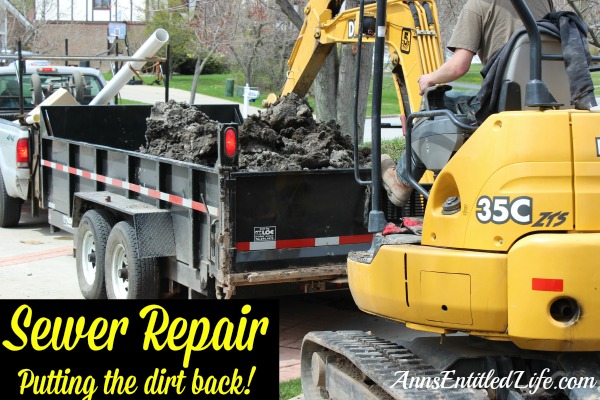 After a short wait for the plumbing inspector (only inspector I’ve ever seen that doesn’t give an all day wait-window, and shows up within an hour!) the fill-in began. 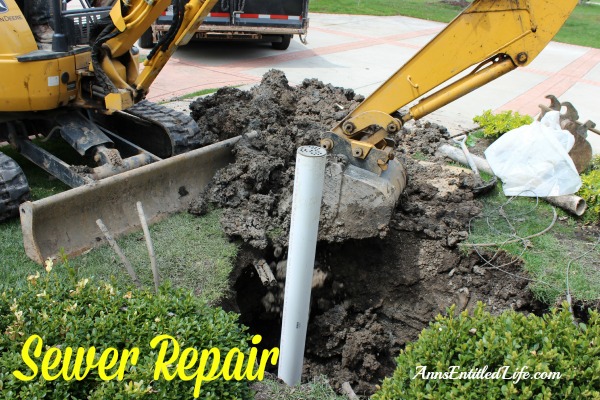 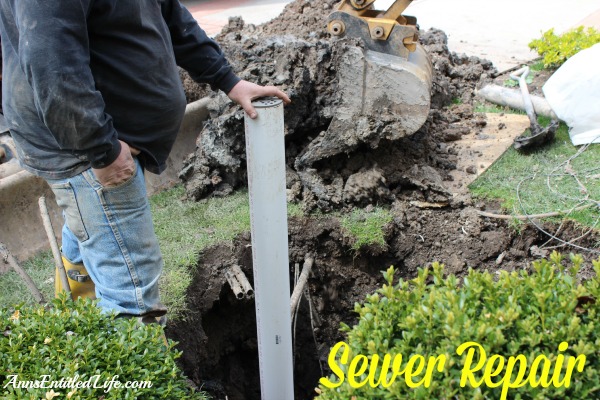 The vent needed to be straight after filled, so they used a level and held it in place after the fill started. 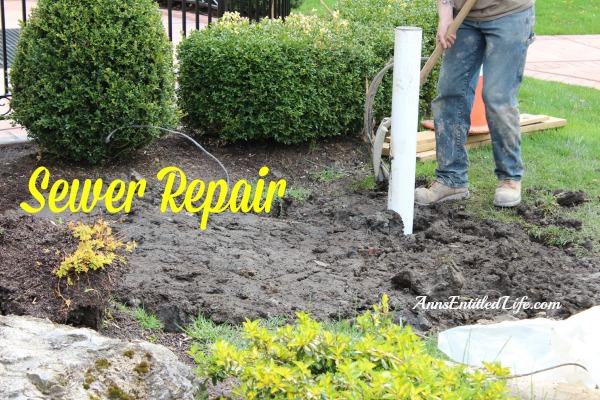 After the backhoe did its work, the rest was filled in by hand. Apparently, we got a lot more dirt back in than normal, and the plumbers only had a little bit to haul away that wouldn’t fit back in the hole. I’m not that concerned, the landscapers will fix it. I have faith in them! 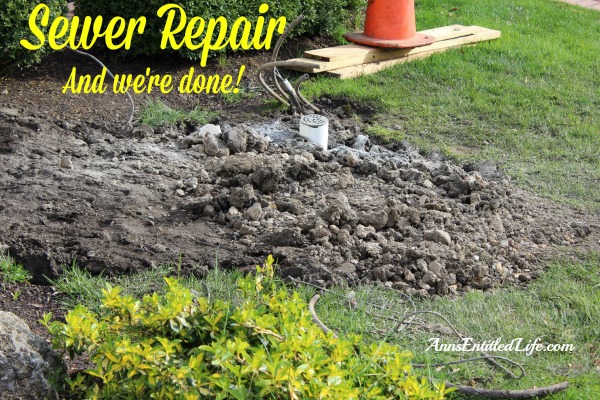 Sure, we could have let this go. After all, the house was built almost 40 years ago, and never had a raw sewage problem, but what if… A raw sewage back-up just wasn’t a chance we were willing to take, and I am glad we had this repaired.

Another unscheduled project crossed off our 2014 renovation list! The fun just never ends in the Ann’s Entitled Life household!