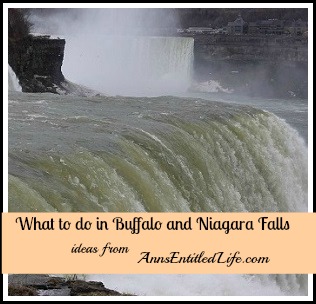 ● Buffalo Architecture – known worldwide for its world class architecture, Buffalo is an architectophile’s dream from Frank Lloyd Wright’s Fontana Boathouse to his Darwin Martin House along with the Richardson-Olmsted Complex (the old psych center) to Millionaire Row on Delaware Ave, there are hundreds of turn of the 20th century buildings to be viewed in Buffalo in the surrounding areas. If you are interested, the Hotel at the Lafayette has been recently restored at a cost of over 40 million dollars. Buffalo Architecture is so outstanding, the National Preservation Conference was held in the city in October 2011 to rave reviews! This is an excellent list of architecturally significant buildings in Buffalo and those that give indoor tours.

● The Buffalo and Erie County Historical Society – This is the only non government entity owning a presidential assassin weapon. While it is on permanent display, it is viewed by request only. And to go along with that, there is the Theodore Roosevelt Inaugural National Historic Site aka the Wilcox Mansion. This is where Teddy Roosevelt was inaugurated after William McKinley was assassinated during the Pan American Exposition in 1901.

● Olmsted Park System Golf courses, running tracks, tennis courts, Japanese gardens, swing sets and more. You name it and the Olmsted Park system has it, including free Shakespeare in the Park performances beginning June 20th in Delaware Park (near the Marcy Casino).

● Buffalo Water Taxis are being operated by Buffalo Sailing Adventures

● Erie County Fair – August 7th – 18th, this is the third largest county fair in the US

● Made in the America Store – This is the only brick and mortar general merchandise store in the U.S. that sells exclusively 100% American made products. The story is interesting – the manufacturers need to send along certificates that all ingredients, components, the packaging, the glue for the boxes – everything to do with the product needs to be made in the USA.

● Goat Island – Take the walk to see the Bridal Veil up close, as well as the American and Canadian Falls. Goat Island is the oldest state park in the US.

● Art Park note that this is the Tuesday $5 concerts

● Devil’s Hole – a NYS Park pretty much next door to the Falls. Great for an easy hike and to see the whirlpools that result downstream of the Falls.

● Olcott Beach – Cute shops, a beach and an adjacent park to picnic. I honestly can’t imagine swimming there as Lake Ontario is never warm! Krull Park