On Monday, I wrote a post about an update on our Florida condo. In that post, I explained we had purchased quite a bit of furniture, and one purchase in particular, was classic Hubby.

First a bit of back story…

We were down in St Augustine for two weeks last month. We had a list of things we wanted to accomplish, including painting and furniture buying. You have no idea how happy I was when we finally got a chair to sit in on day 7!!

Since this is a vacation condo, I decided to go beach-y. That didn’t really work out though, so far it is more super casual. I am ok with that. Like when Sonny furnished his apartment, I knew I wanted to furnish this condo cheaply. But I wanted fairly sturdy stuff. That meant a lot of consignment store shopping.

There is something to be said for only having a few items to choose from – you pick one of a few and selection is made quickly. Well, down in St Augustine and Jacksonville, there are a lot of consignment stores! Makes sense – a lot of elderly folks move to Florida, and there children may live one or two thousand miles away. When the person passes, it is estate sale or consignment shop as the cost of shipping something a great distance can be more than the price of the item originally. Unless something is of great sentimental value, it probably ends up for sale cheap. Because there are so many choices, we did a lot of running around.

Since we don’t just want to jump at the first thing we see, we spent quite some time in new furniture stores, as well as consignment stores and Cort furniture, sometimes going back two or three times to the same store. Nothing fancy-smancy for this place though (believe me, it was a real temptation! I could have gotten Stickley pieces for 25% of new-retail!)

So we were looking for a dining/kitchen table. The area in which this is to be placed in the condo is small. Instead of two rooms, it is a dining room/living room combo. I was pretty firm on a glass table to give the illusion of more space. Hubby is pretty firm on what type of chairs he will sit in, making the process a tad longer than it probably should have been. We had been zoning in on a table size, and chairs Hubby could live with. The whole shebang (table and chairs) was looking to be around $500.

Well, we were in this furniture store and Hubby saw a table and chairs he was lukewarm about, but it had a glass top table, and four ok chairs. I could live with it (it wasn’t great, but it wasn’t horrible either). We couldn’t see a price, so asked the sales person: $191 for the table, chairs and baker’s rack.

OMG!! Hubby lit up like a Christmas tree! There was no way we were leaving this place without this set. No. Way. 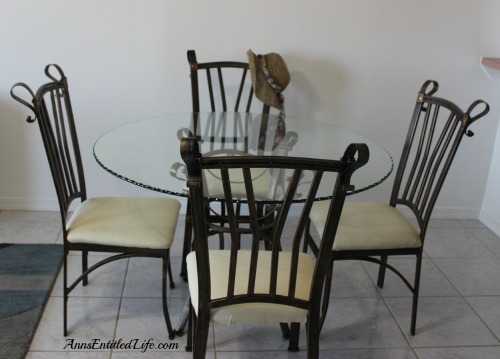 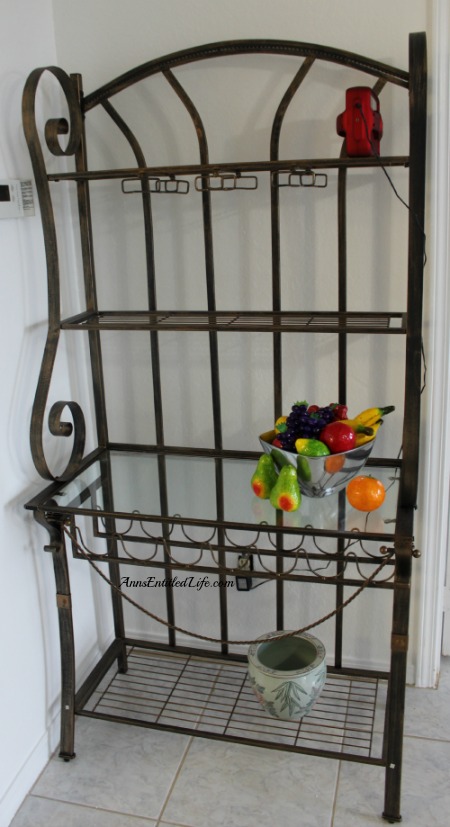 We found out later they were repossessed and that was why we were that cheap. I am putting reupholstering the chair cushions pretty high on my “to do” list.

Now why do I say he is cheap as opposed to a value shopper in this case? He didn’t fall in love with this set until he learned the price. Before that it was a “These are ok” and “I guess I could live with them”, but as soon as he found out the price, BAM!! SOLD!!!!

I honestly don’t mind the table, the chairs are meh, and I am not a fan of the baker’s rack – even though it provides some much needed storage. But I will admit that at the price we paid, I don’t have to be married to any part of this set. We find the chairs uncomfortable? Well, I’ve blown $200 on dumber things in my life.

So what do you think of Hubby’s cheapie find? Would you have purchased it to for the price, or would you have held out for something you really loved, even if it cost two to three times the price?