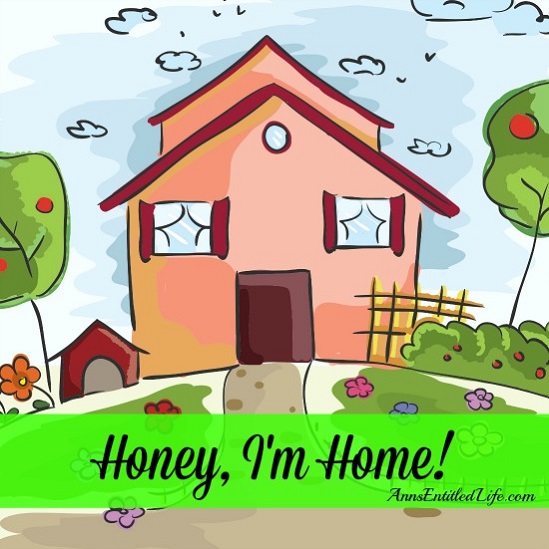 Hubby and I decided to drive back home last Sunday. Unfortunately, Max was feeling under the weather, and since it was coming out both ends (poor little guy), we put off driving home until Monday.

For the drive north we decided to go the “short” route through West Virginia. BUT, we wanted to avoid Charlotte (like the plague! The traffic is nuts!), and we were shooting to avoid Columbia too. Hubby had it all mapped out on google maps, but ignored my (repeated) request to print out those directions that showed exactly how to avoid both cities, and only added an hour to our drive home (and that hour is squishy since the traffic in Charlotte has sucked that up and more in the past). You see, this was not the first time we had decided to deviate from the car GPS, and we have had things go awry on deviations in the past. Hubby insisted that his portable GPS would replicate the google maps directions as long as he forced it to with multiple destinations (if you want to go from Point A to Point B, but not the most direct route listed on a GPS because you know the traffic is horrible, you put in point A1 and sometimes point A2 to force the GPS on a different path). My car GPS is horrendous! I have a Lexus, and they have the world’s worst GPS system. Simply terrible. So Hubby figured his portable would do the trick since we knew the car-installed-GPS would not.

Welp, that lack of printed instructions cost us an additional 90 minutes on the road over and above the added hour we knew about. Or should I say “cost Hubby” since he was the one that had to drive the extra shift.

Still, I felt bad Hubby had to do so much more driving than I did on Monday, so since the drive the rest of the way home Tuesday was only 7 hours, I drove four hours and he drove only three. Aren’t I nice?

The weather back in Buffalo has been pretty nice. The first day was a bit of a shock (in the 40s!), but it was in the 60s this past weekend, and I was able to get a bit of yard work done.

This year, the only “bad” thing that happened to the house when we were away was we arrived home to find our mailbox in pieces. We knew about it since my brother was visiting the house regularly, and he had told us it was destroyed. Apparently “someone” took out eight of the mailboxes on the street. There are still a few around the corner that are all cockeyed. Looking at the dent in the metal of our box, my vote is for the municipal plow. But, we will never know since we were not here. I will say whatever hit probably got hurt just as badly as the mailbox… the post is still standing straight: it is in 6 feet of buried concrete, and it is a solid steel post.

Our mailbox and the post were a custom job, so Hubby is on the hunt for an ornamental ironworks shop to fix it (he refuses to go back the shop that did it originally … to say the owner is a talented artist with zero customer service skills, is an understatement). We went over to Lowes to buy a temp job, and now I need to call the post office to deliver our mail. We had it forwarded while we were gone, and they won’t deliver without a call… and a mailbox.

Not too bad though considering what happened last year while we were away! 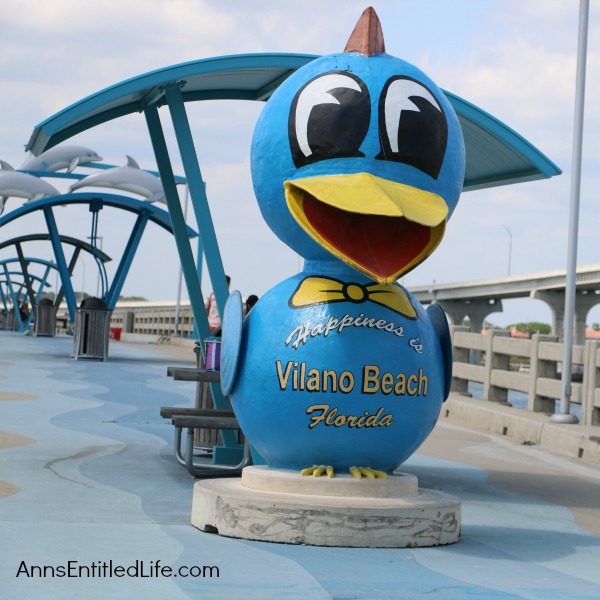 These are some of the photographs I took the week before we left Florida. Hubby and I went down to the Pier at Vilano Beach for lunch one day, and we walked out on the pier so I could take some photos. 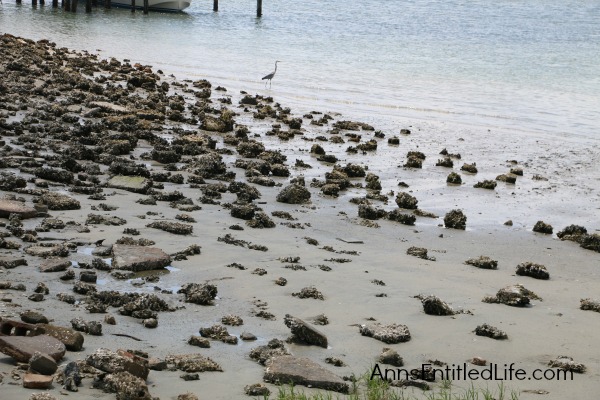 The tide was out – the river is actually an estuary, and the tide does go in and out since it is so close to the ocean. 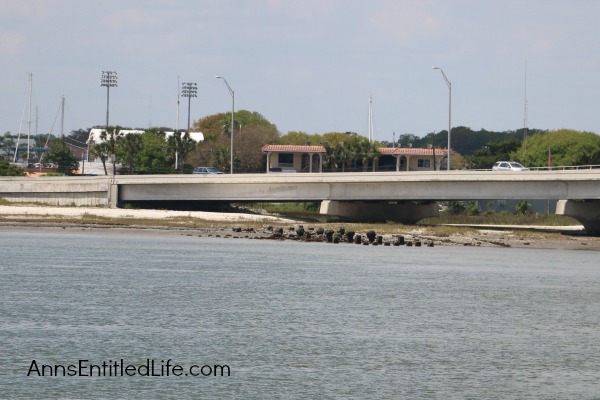 The “Pier” is actually part of the old draw bridge that connected Vilano Beach to St Augustine before the new bridge was opened in 1992. A local realtor was telling us that the old bridge was quaint, but when the cords got stuck, it was a 40 mile trip down Rt 1 to cross over and down from Ponte Vedra and come down A1A to Vilano Beach. Those black stumps are across the river and what is left on the St Augustine side of the former bridge. 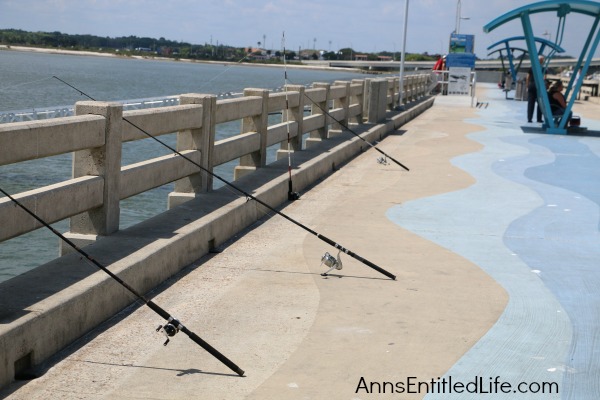 People were fishing up and down the Pier, 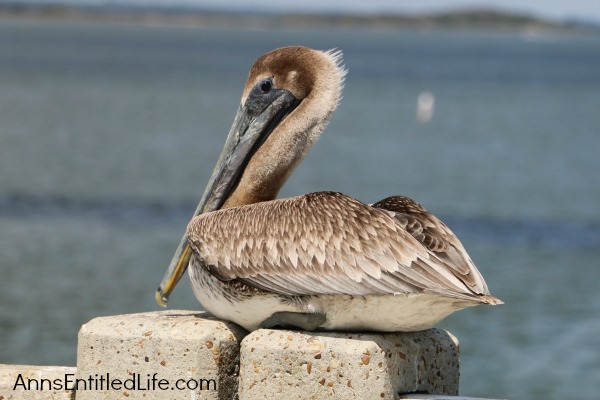 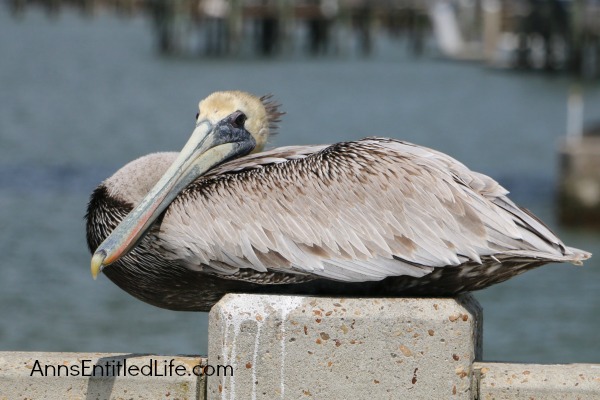 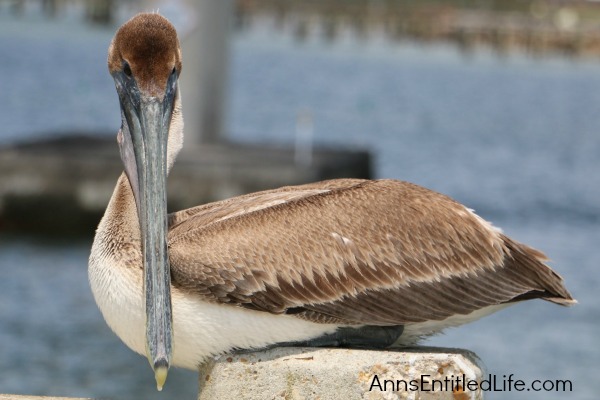 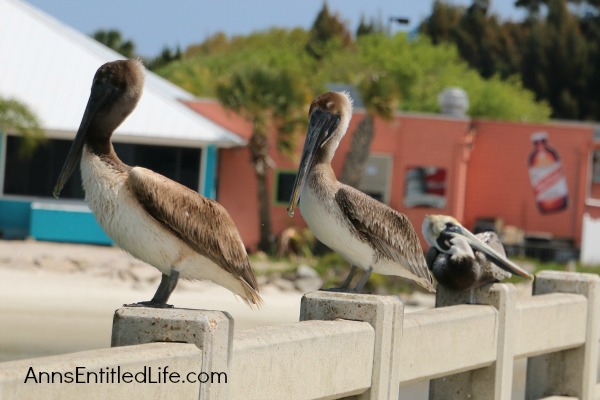 and the pelicans were supervising the fishermen.

All in all we had a nice time in Florida this year, but are glad to be home.