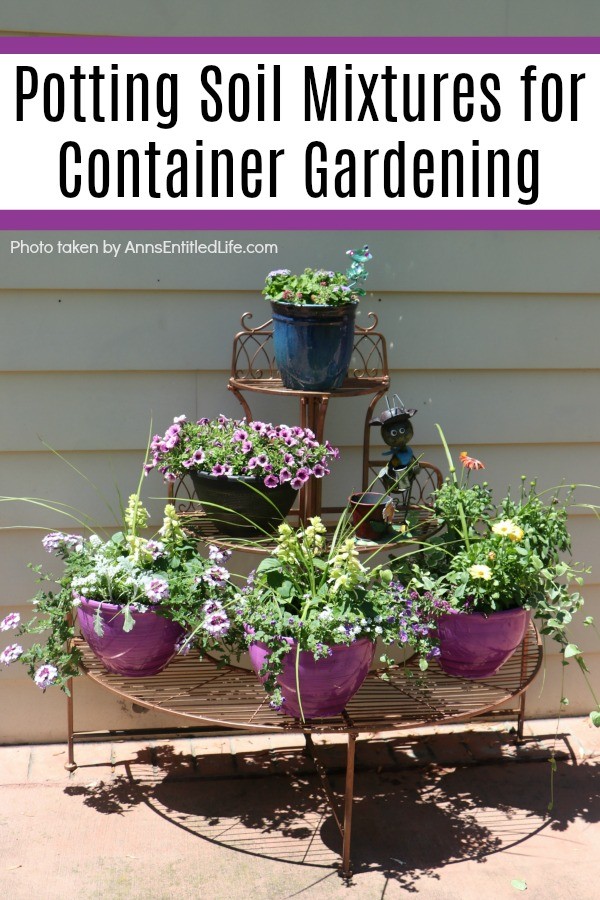 I removed the last of the herbs from the ground, and am now all potted-up. The weather this year has been cooler than normal. We have had a very, very long spring. In my lifetime, I have never seen such a spring in Western New York. Spring basically started the second week in March, and has been 40°s, 50°s, and low-60°s through the third week in May. We are finally drifting more regularly into the 70°s, but it has been a long haul. We have had a few 80°+ days, but not many. And the rain… oh my, the rain. While we have not had it as rough as the Midwest, it has been pretty soggy here, to say the least.

Hubby and I have also been quite sick with some sort of crud that has been going around in the area for the last few months. If you get my newsletter, you know how bad it was. The weather, combined with my illness, gave me a very late planting start in 2019. I didn’t get everything planted until after Memorial Day, so three weeks later than normal. 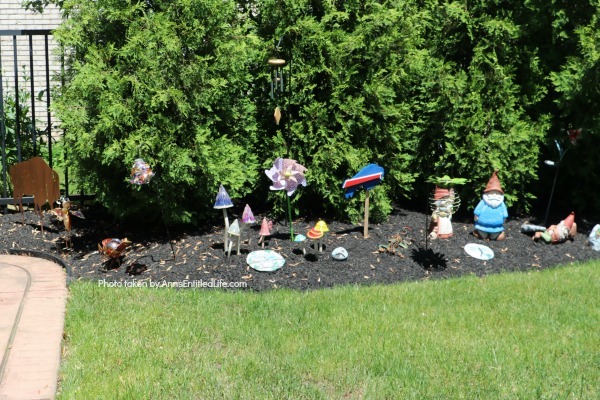 And finally, Hubby and I are traveling in September and October, so that means everything outside at our house has to be packed away by Labor Day. I do not plan on coming home for Halloween and have to head to the backyard to put away plants, summer furniture, and the bazillion little lawn decorations I have (above is a small sample, I’ve got a problem!)

With all that in mind, I really thought hard about what fast-growing vegetables to plant. I decided to go heavy on flowers, lighter on vegetables, and very light on the herbs for a different look in the backyard. 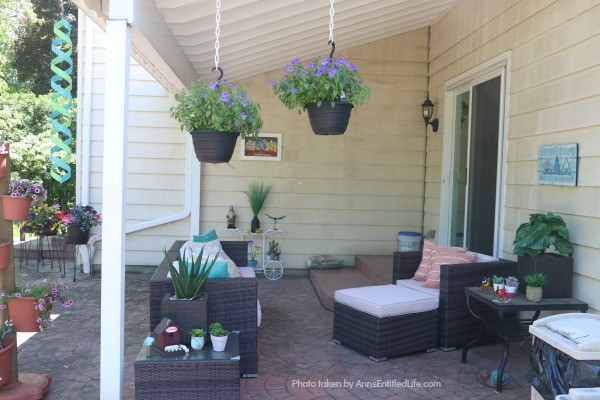 This is my patio for this year. I added a bit more “garden art”! 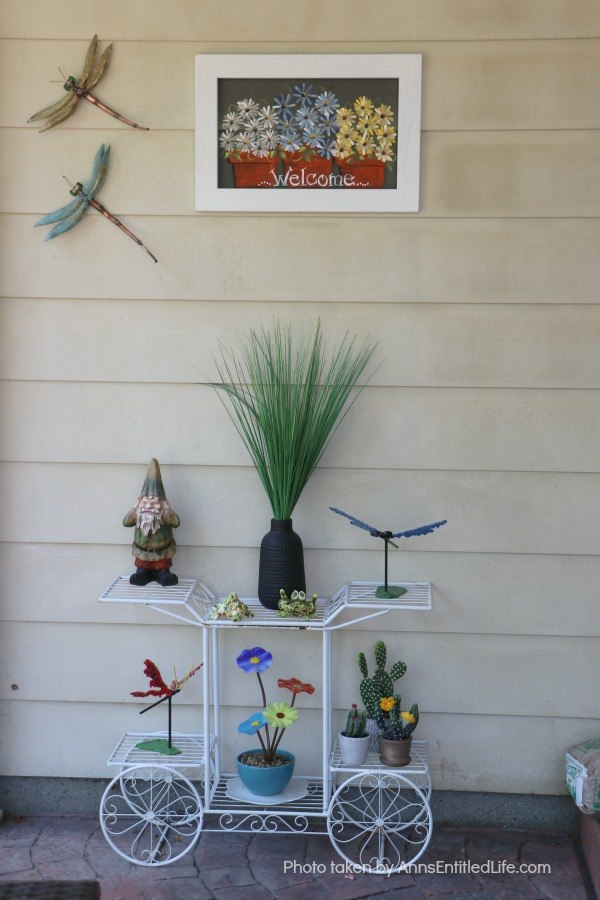 Some of this is artwork from Florida, local New York State artists, and some were picked up at Big Lots. It is an eclectic mix. 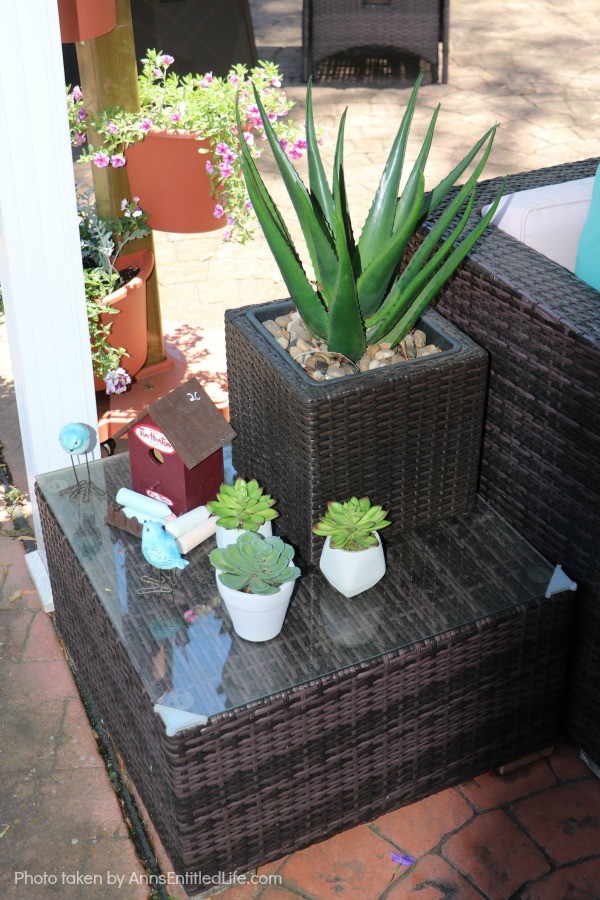 I have chalk (in the Tim Horton’s Birdhouse), bubbles, and balls for when the kids come over. It is odd to have young ones around again after so many years without them. My youngest niece is now 27 (Sonny-boy is over 30!), so not so young anymore. The “children” are having children. **sigh** I wish Sonny-boy would get with the program. 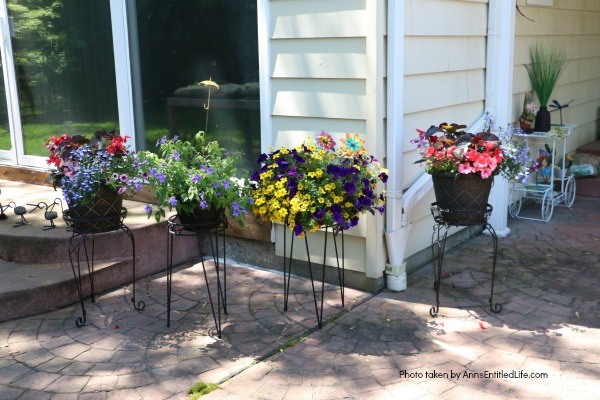 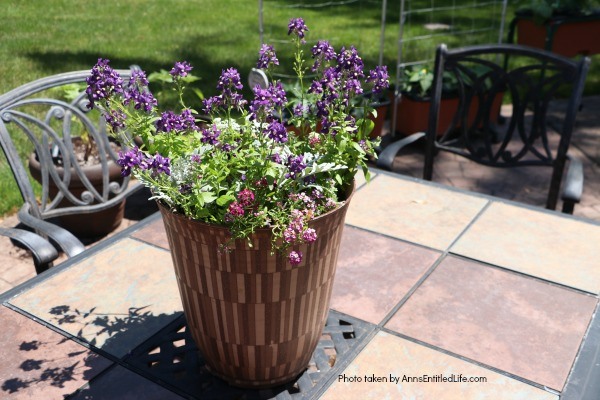 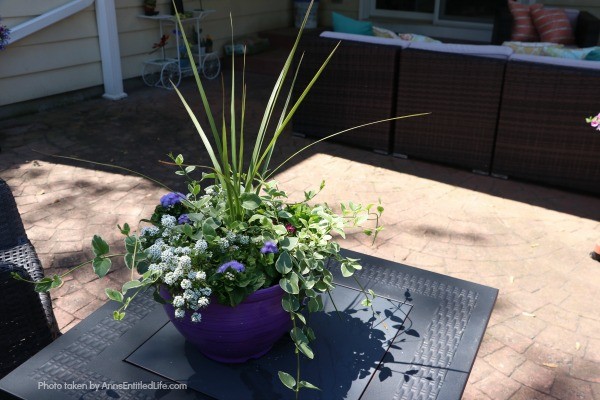 These are some of the flower baskets I made up. 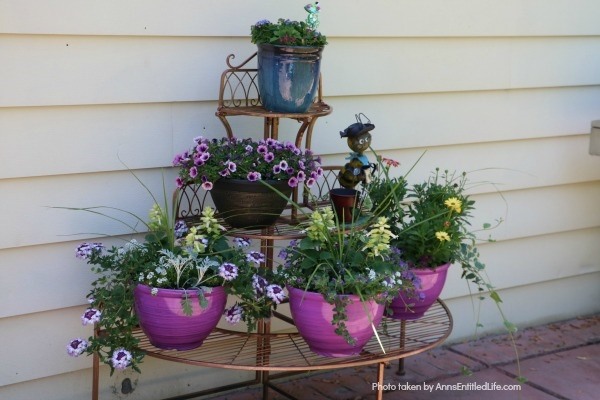 Last year I purchased a stand at a local garden center. It was what I kept my cabbage on. Well, it was looking kinda beat when I hauled it out of the shed this year, and so I spray painted it to brighten it up!

First I used the Rust-Oleum Stops Rust Spray Paint (yup the auto primer) and allowed it to dry. Then I sprayed on a Bright Copper – also from Rust-Oleum. It looks amazing, and it only took about 90 minutes from start to finish to bring new life to that old outdoor shelving. 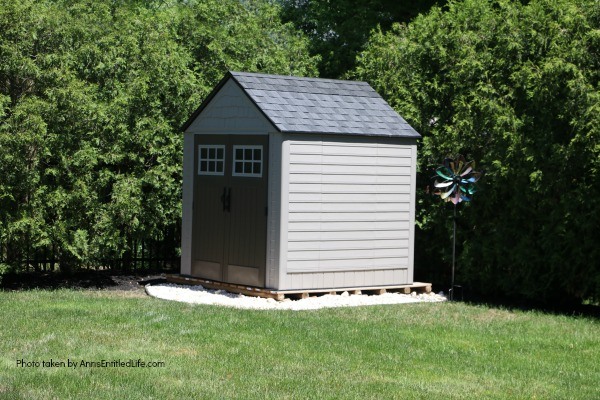 And speaking of sheds, Hubby put this up last year. We got it at Home Depot, it is a Rubbermaid shed and it went together fairly smoothly. After one winter, I will say it held up well. The latch is rusted a bit, which is disappointing. I probably should have sealed it first.

Hubby still has to skirt the bottom. My brother (the exterminator) said to do all four sides so no critter decides takes up residence underneath there without having to put a real effort into their new home. I need to get Hubby on it because if skunks end up being the residents, Hubby will be the one trapping them and getting them out. 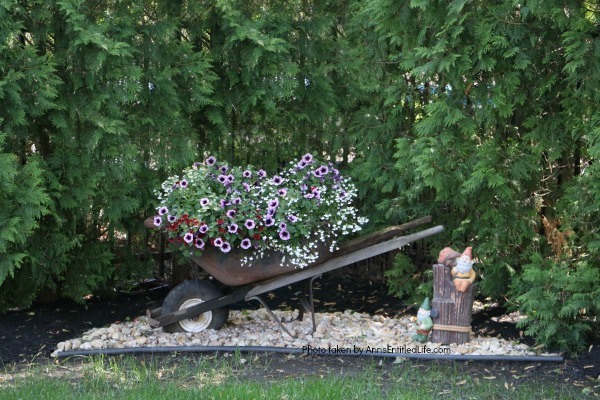 My wheelbarrow is sporting a purple and white mixture of flowers this year. I am trying to attract hummingbirds again. We get them every year, but the more purple flowers I have, the more that come. 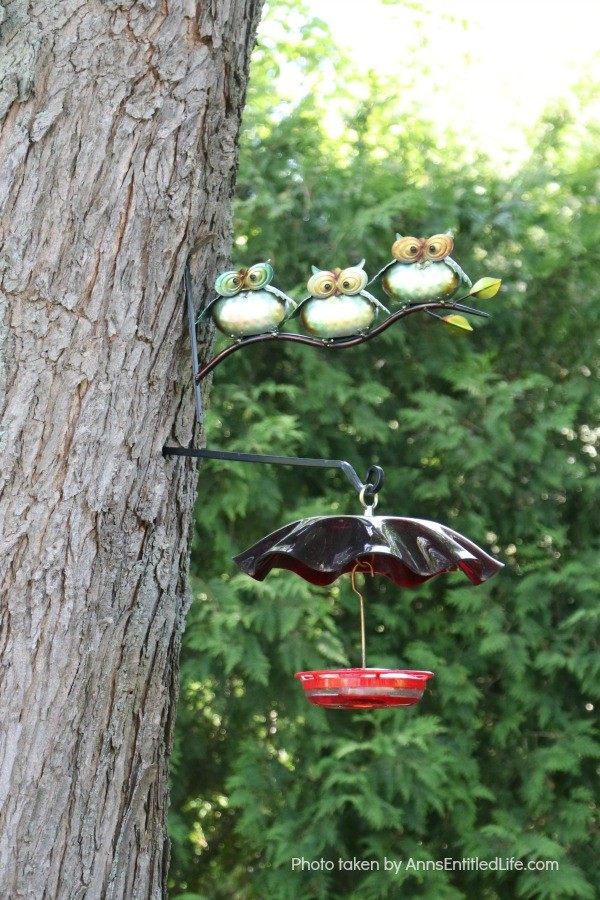 And we have a hummingbird feeder on our tree, and the owls watch over them.

Vegetables I am Growing:

I chose the vegetables I did for an early harvest. We can freeze the peas and the green beans, Hubby wants the mustard greens for soup, and the spinach will be done early as it bolts with the heat. 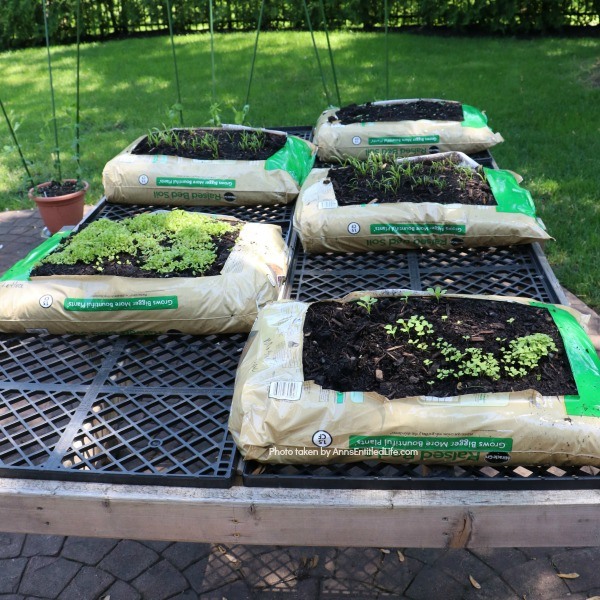 I am doing the bagged vegetable growing again this year. This is where I planted the lettuce, mustard greens, and spinach. As you can see, everything is very behind last year’s pace, but I again I am three weeks behind in my planting. 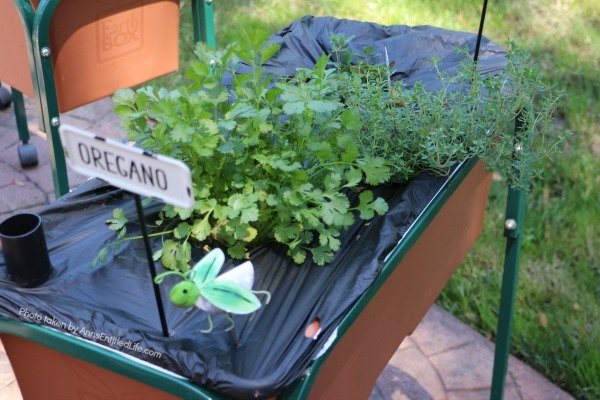 Herbs I am Growing:

Rosemary is not considered very hearty for this area. I decided to keep it in the kitchen for a while, at least until the hot weather of July happens. 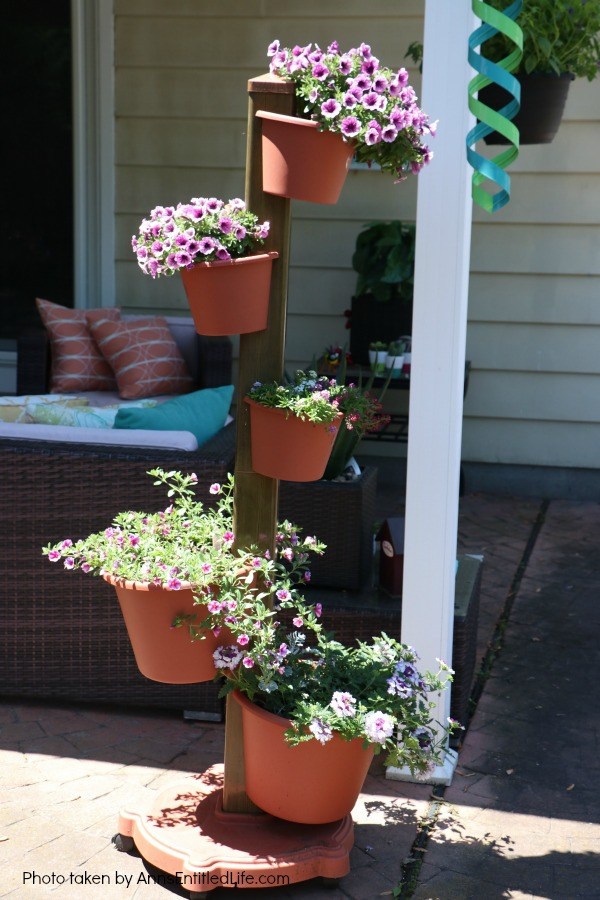 Flowers I am Growing:

• I made up a lot of pots with various purple, pink, yellow, and white flowers. I want to attract bees and humingbirds, so concentrated on flowers for that. Included in my pots are dusty millers, spikes, salvia, vinca, alyssum, etc. for filler and depth. I’ll be doing some long posts on the various flowers I purchased later this year and early next year. In pink and purple I have petunia hybrids. In purple, nemesia, and scopia. In pink, calibrachoa, and in yellow, osteospermum.

In my fabulous garden tower I am growing spiller flowers this year. Should be beautiful come August when I have to pull them out early. {heavy sigh}

I spent a fortune on flowers this year! Normally, I only get a few hanging baskets and a few potted flowers for the patio. This year, I went bonkers. And my pocketbook reflected that. I bought trays upon trays to plant, and ended up with 11 potted patio plantings (plus the tower), plus sunflowers. While the flowers cost far more than any plant seedlings I have ever purchased, I must say that even in the early growth stages, the patio looks, and smells, amazing!

The earth boxes followed these directions: earth box set-up I have not really deviated from those instructions since I started using them in 2014. These are for my beans, cucumbers, and herbs.

The Jerusalem artichokes are planted in pots. They have the ability to take over a garden, so Hubby didn’t want to chance it. The pots were planted as follows: 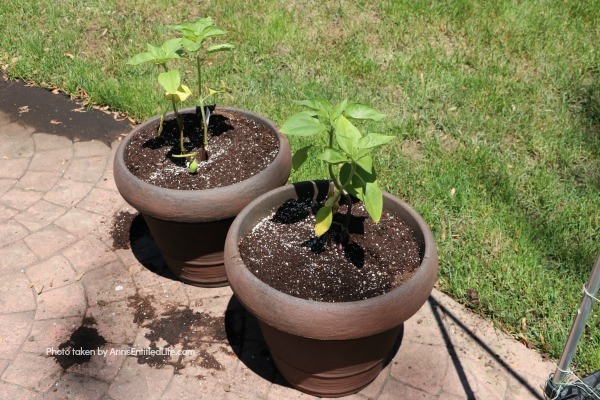 The half and half mixture is due to the length of the artichokes and not wanting the pot to tip over.

The sunflowers are planted in pots. I was going to plant them on the side of the garden shed, but Hubby needs to skirt it, and I didn’t want them crushed or distrubed. The garden shed ended up with a rock border instead.

The half and half mixture is due to the same reason as the artichokes – some heavy soil so they do not tip over from the height of the flower. 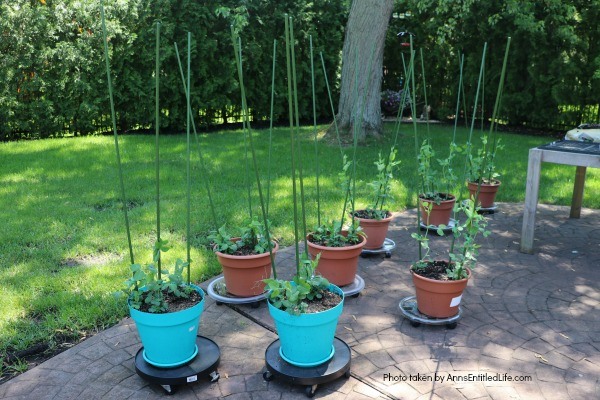 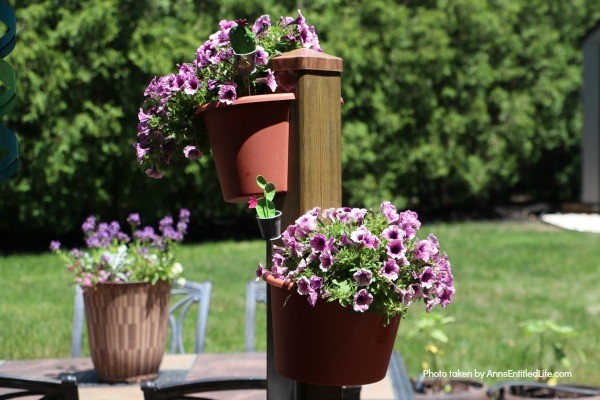 While I do use the Miracle Grow Potting Soil I also feed the plants (vegetables, herbs, and flowers) too.

Are you gardening this year? Containers, in-ground, or a mix of the two? How is your garden growing?