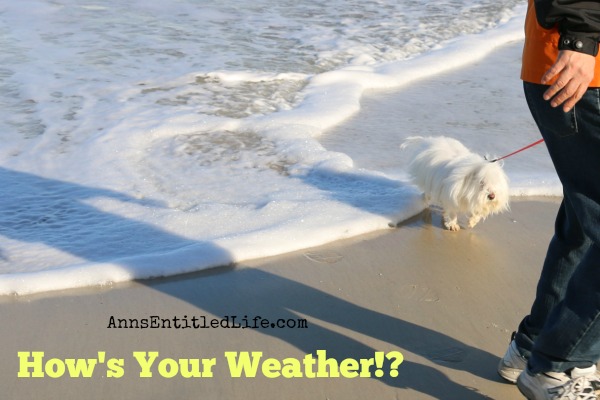 Hubby and I snuck out of New York State last Sunday. The temperature was 54° when we left the Buffalo area, and it was 54° when we reached the St. Augustine area Monday evening.

The weather up in New York had been typically mild for the beginning of winter. I live 20 miles north of the lake-effect snow storm that hit below Buffalo in mid-November. And the fact that we live north of the snow-belt can present a challenge when driving south in the winter. If you look at a map of Western New York (helpfully supplied and labeled below): 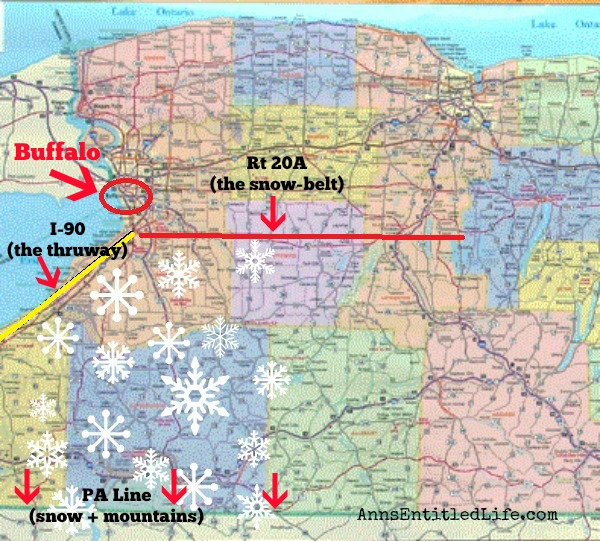 you can see why I said “snuck”. We live northeast of Buffalo. We seldom get lake effect snow in our town unless the storm covers the region. However a lake effect storm can impact our travel as we still have to travel south through any snow, then driving into the Pennsylvania and West Virginia mountains for a trip down to Florida. And we can’t forget the impact of a general snow when driving down south in the winter, especially snow and ice in those mountains.

Hubby and I circle a tentative date to leave for Florida on our calendar but we have to be flexible when watching not only Western New York weather, but winter weather conditions on the entire east coast. The last thing we want to do is drive into a winter storm anywhere!

The drive from Buffalo to St Augustine takes approximately 16 hours. Hubby and I break that up into two 8 hour days. We switch off driving every two hours too as neither one of us really likes to drive.

Now, I mentioned that the mountains of West Virginia are on the way from a “normal” drive from Western New York to Florida. Normally, we take this route and continue driving as far through those mountains as possible the first day (about 8 hours of driving), stay the night in a local hotel and then move on the next day. There are still a few mountains to climb (and worse, go down), but where we stop is near the end of the worst of the mountain driving.

I hate driving those mountains!!

Yeah, call me a wimp, but the are icy in the morning when we leave the hotel and I’ve been caught driving at 15 miles an hour in heavy snow on the way down more than one mountain. If we have any delay along the way, we are arriving at our hotel in the dark. Fun time driving unfamiliar mountains in the dark, possibly in winter precipitation. For some reason, it never seems to be Hubby’s turn to drive when we hit the mountains, regardless of how we mix up the driving starts and switches.

Due to my incessant complaining well thought out suggestion, Hubby and I decided to add a few hours to our normal drive time and avoid those mountains completely. We also planned the drive to avoid all major cities along the way. Last year we got caught in Charlotte traffic which added over an hour to our drive time. I don’t know about you, but I’d rather drive an hour out of my way and move as opposed to sit in stop and go traffic at 5-15 miles per hours for an hour of two in congestion. Our biggest traffic situations came in Savannah and Jacksonville this trip, both of which move.

So we planned our trip away from the 90 and headed a bit to the east. On the way down the weather was very mild except for period of heavy fog in New York and Pennsylvania. We also had overcast skies. It was smooth driving in West Virginia, Maryland and Virginia. The next day, we drove down to St. Augustine in clear, sunny weather that was in the 50s the entire way down. 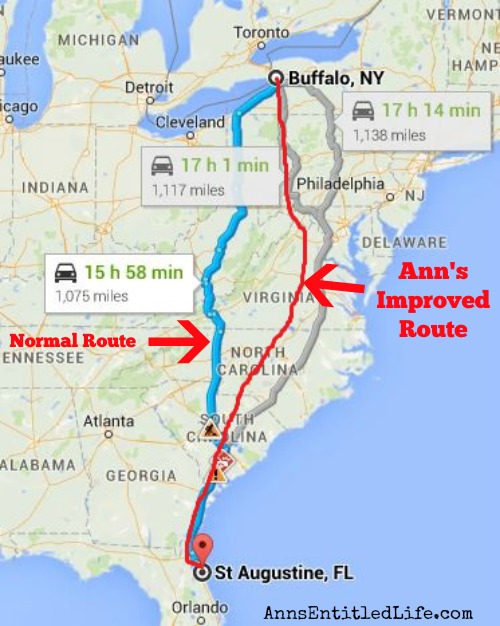 We had been down south but a day when we started to get calls that we “got out just in time”. Apparently the north/northeast has had a bit of a cold snap? And my father called last Thursday to let us know we missed a regional snow.

Down here the weather has been better than it was last year for the most part. We didn’t see the snowflakes that fell in Jacksonville on Friday ( flakes that melt before they touch the tongue, and people go nuts calling it “snow”… shesh). We had two days of wind and since we are on the ocean, it is especially windy! Mr. Max was not thrilled with his walks those days. We also had one day in the 70s, and a few in the 50s and 60s. A cornucopia of weather! 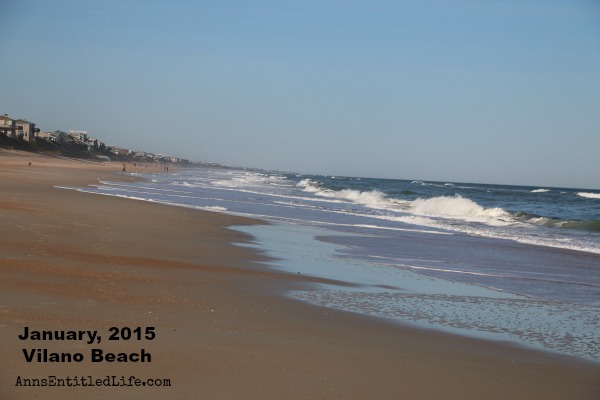 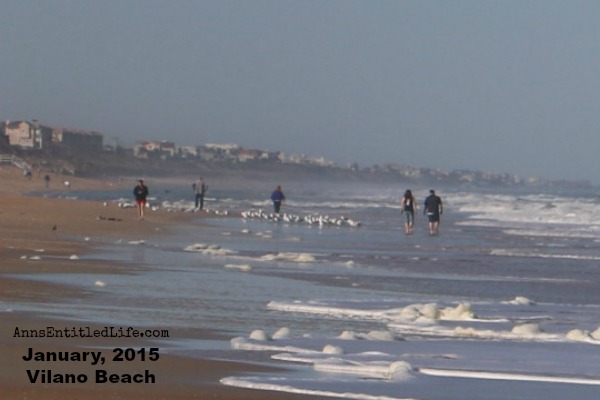 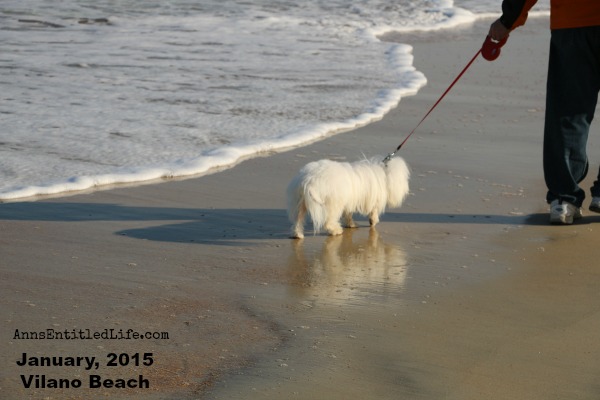 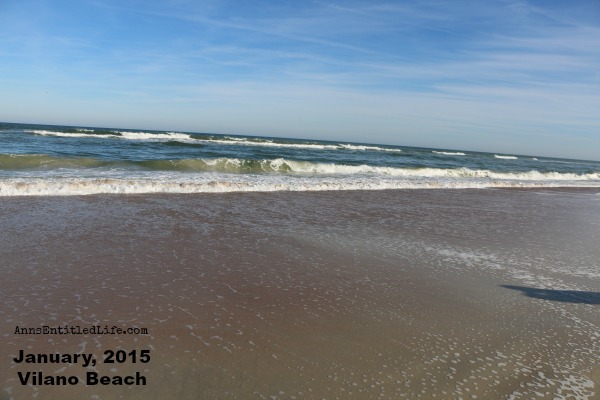 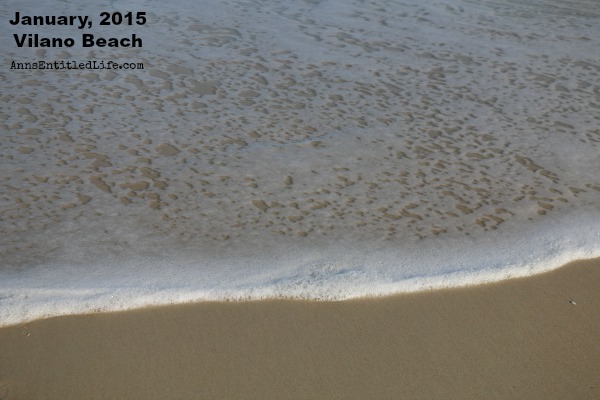 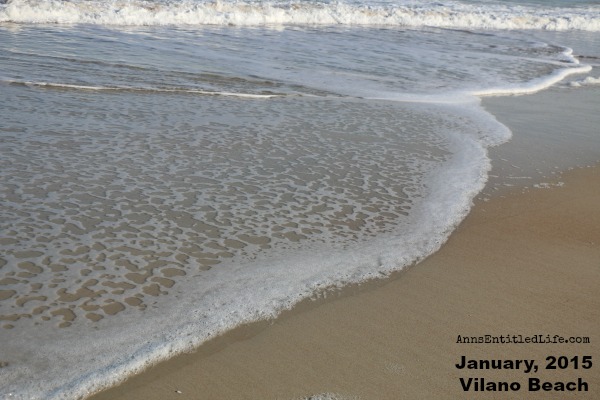 We took Max down to the beach on the 70° day. He’s a tad “different” from the last few years, and I think parts of his brain need to relearn what he used to do when he played in the ocean. The wave chasing may come later, but he truly wasn’t interested that day.

We are down in Florida until April, as we snowbirds! We travel down south to escape the northern cold and snow during the winter months. Most years, this is a win, but 2014 was such a crummy winter everywhere, that it wasn’t all that great down here either. I am hoping for better in 2015.