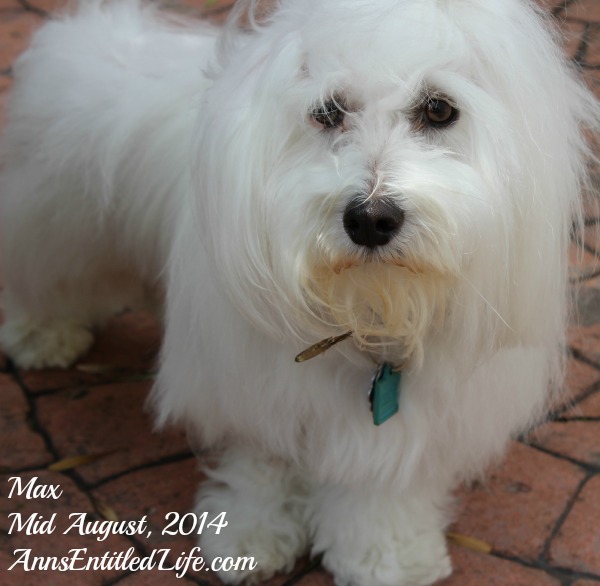 Max, our nearly-six-years-old Coton de Tulear was diagnosed with GME in July. I’ve written about his progress extensively, here and here and here. This is the original post where I detailed the trail to diagnoses and recovery.

Our return to Cornell last week brought nothing but good news for Mr. Max. His white blood cells are within normal range. We briefly saw Dr. Slanina, his neurologist at Cornell. She was very pleased with his progress and reduced his Prednisone. He is still taking his liver drugs, his pain medication and his liquid drug; Cyclosporine.

She told us many things about what to expect from Max going forward – eventually she hopes Max can go to down to one Prednisone pill every other day. That would be great, because as I mentioned before, Max has the Prednisone-munchies. He’s a fat-boy now. Usually he weights between 13-13.5 pounds. He was down to 11 pounds when released from Cornell back in July. He’s now at 14.2 pounds, and he was as high as 15.1 pounds!!

He is extremely food motivated now (where he never was before), and it is all due to the Prednisone. Hopefully that will reduce with a decrease in Prednisone. On the other hand, he sure comes when we call him now hoping for a treat as a reward.

Dr. Slanina told us that he should be on cytosar (his chemo agent) and Cyclosporine for the rest of his life. She also did tell us that after the next trip to Cornell, the (more) local Orchard Park Veterinary Medical Center should be able to administer his Cytosar.

My first reaction was “no”. I wanted him to go to Cornell until we left for Florida, but thinking over the weather in December, I am leaning toward Orchard Park for November and December. Hey, a 30 minute drive is a lot different than a 3 hour ride. This will all depend on the timing of his chemo after October as I’d like to take him to Cornell the time before we head to Florida – if at all possible (depends on how long in between his next few chemo drips are – timing is everything!).

One of the best pieces of news from Dr. Slanina is an explanation of that “15 days to 3 years” life expectancy after a GME diagnosis. She said the addition of the Cyclosporine is new (which we knew), and they don’t have enough data to take into account a life expectancy when using that drug (which we had reasoned out for ourselves). Apparently, the remission (or cure!) could allow him to live a very long life (she was talking 10-12 more years!) That was certainly exciting news, although we are cautiously optimistic as there is no data to support this (there is a long explanation as to why, but basically the dogs that do into studies are in the care of a vet or vet hospital at the time of death, and so it skews shorter lifespan once the dog responds to the drugs).

Other news from the past month was no acupuncture for Max. According to the acupuncture-vet, acupuncture can stimulate the immune system which is contrary to what we are trying to do with Max.

The rehab vet is moving him down to one day a week. She said he has recovered a lot of his muscle mass, and she feels once a week is enough going forward (always subject to change).

The recap is: Max is doing very, very well as of now. He has to lose half a pound, but none of the vets is concerned about his weight at the moment. They apparently like him a little heavier just in case he gets ill. The prognosis is as good as we could have ever hoped for, and he looks a lot like “Max” now!