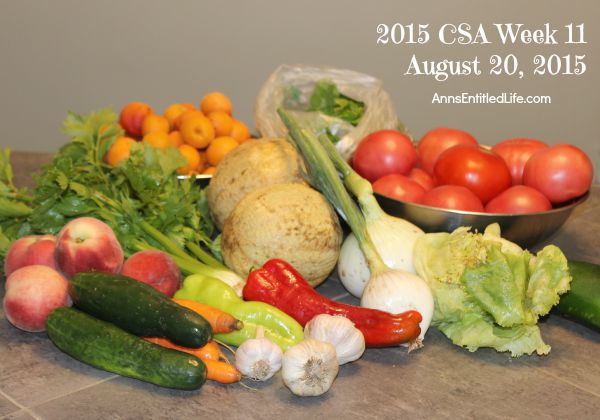 This is the diary of our 2015 CSA share. The cost of our full share is $545 for 22 weeks, from June through October, and works out to $24.75 per week. Western New York weather is such that June is lightest CSA month. September and October will be more than abundant! The first few weeks are light, and very, very leafy. As we move to the fall, the CSA becomes more abundant, and the variety increases greatly.

We had a TON of rain this past week. One night it stormed so hard, we received 4″ overnight. This has been an odd summer, to say the least. May was BROWN instead of green. June was rainy. July – brown. And August was nice and crispy until a week ago when the rains started to fall. We were in “drought” conditions until June. Now that didn’t mean we didn’t have rain or water, it just meant it didn’t rain (or snow) enough in a day to make up 3/4″ of rain. Apparently that is the meteorological definition of a drought? I find that weird, but whatever.

So there was a big fat warning on our CSA’s website that they had no idea what we would be getting this week as they didn’t know what would rot, and what would grow.

There wasn’t a huge variety, but that bag was again pretty darned heavy.

We also received 10 ears of corn that are not in the photograph. I won’t even bring them in the house. IMO corn is why pesticides were invented. The bugs just adore non-sprayed corn.

I told Hubby he could process the corn. Lucky him. I seriously almost didn’t take it, the corn bugs and worms freak me out so much.

Fruit was again apricots, peaches and plums. Hubby made four apricot pies last week: 1 we ate (it was soooo good!), 2 we froze as whole pies, and 1 just the filling. I am making a few crisps with apricots and peaches tomorrow. The fruit share is really, really worth it!