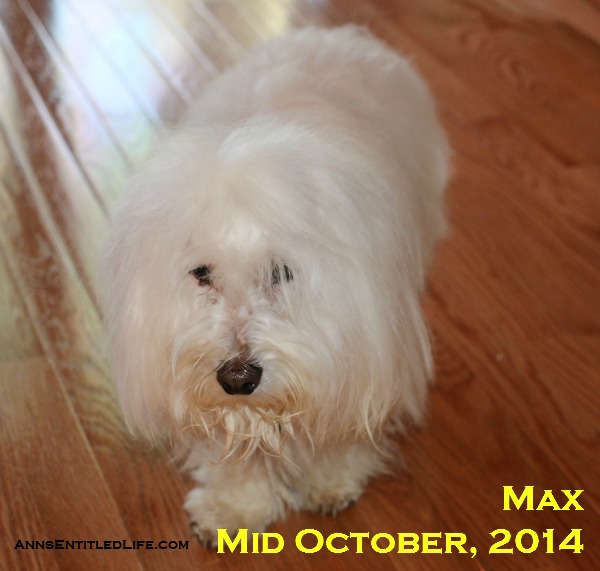 This past July, Max, our six year old Coton de Tulear was diagnosed with GME in July. I’ve written about his progress extensively, here and here and here and here. This is the original post where I detailed the trail to diagnoses and recovery.

This is the latest…

We returned to Cornell on the 6th, Max received his chemo on the 7th-8th, and we went home later on the eighth. His numbers, except his liver, are all doing well. Since one of his liver numbers is elevated, he remains on his big-blue-liver-pill. Max is terribly difficult to pill, so this was a disappointment.

His Prednisone was cut back again. He now takes 1/2 a pill twice per day. The Prednisone-munchies have started to back off which is a good thing: he’s so chubby at 16 pounds, he’s not enjoying life as much as he used to (he always weighed between 13 and 13.5 pounds when healthy). In the nearly two weeks his Prednisone has been reduced, he’s shown signs of returning to his picky-eater-self. This is a blessing and a curse. The blessing comes from eating less means returning to his normal weight. The curse is… he’s an incredibly difficult dog to pill. He actually has a reputation at Cornell, and the vet techs there now warn the fourth-years how bad he is to pill. LOL

His chemo has also been spaced out to five weeks from four, and he can have that administered locally. So, we are done with Cornell until next May (assuming no other issues). If he remains on the five-week chemo cycle, he will receive chemo twice locally, then three times in Florida, then back to Cornell. If he takes a turn for the worse… well, we will of course head back to Cornell. If his neurologist extends his chemo to six weeks, that may hooey-up the March application and we may end up at Cornell in April, but that is a long way off and we will worry about that when the time comes.

Max is still in rehab once per week, although the rehab vet has said he has gained back nearly all his muscle mass! Which is awesome! His walks are more pleasant for all of us too, as he can now keep up (or try his old trick of leading…. grrrr) and go on his long walks again.

Max is doing very well right now. His hair is mostly growing back, although his tail swish is kinda light. Still, if that and his partially splayed left foot is all that he is left with to remember his horrible experience, we count ourselves (and him), very fortunate.