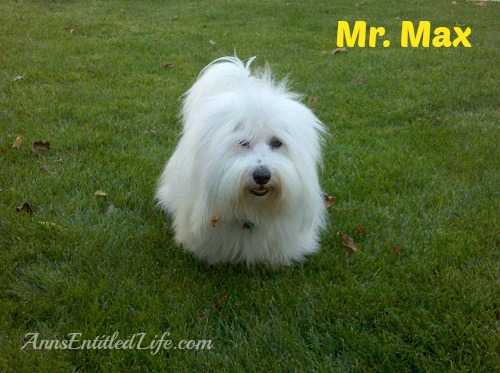 Wow! What a difference a week makes. There is so much to tell you all…

As I wrote last Monday, Max, our nearly 6 year old Coton de Tulear has been diagnosed with Granulomatous meningoencephalitis or GME for short. He spent a week at The Cornell University Hospital for Animals (Thursday July 10 – Wednesday July 16, 2014).

When we picked him up at Cornell last Wednesday, Max was 1000% improved from when we dropped him off on Thursday the 10th. While silent, he did recognize us. He was aesthetically a complete mess though – matted, and his poor little butt; he had diarrhea and they chopped away his hair so the feces wouldn’t stick around and his poor little tushy was so red and sore. I still haven’t sat down with him to comb, cut and pull out the mats, and I have to soon before they start getting uncomfortable for him.

Importantly: he could see. He was aware of his surroundings. He was able to put weight on three legs: front paws, and back right. His left leg wasn’t very strong. He could walk a few steps. He was able to go to the bathroom without us expressing his bladder.

We were given a rundown of what to expect for his follow up care: he’d return every 4 weeks for the chemo drip. He’s on a number of medications, 3 for the rest of his life. Since one of those is a pill, I expect fun-times ahead. Max is the world’s worst pill taker.

He will never receive immunizations again. He will have a rabies titer and receive a medical dispensation from a rabies shot. His pneumonia, kennel cough, etc., shots are also finished. We are allowed to continue his heart-worm medication as well as his flea and tick med and he’s allowed to receive his monthly Adequan shot. Basically anything that may ramp-up his immune system is forbidden.

When we got him home Wednesday, he was very tired. He had numerous 5 minute trips into the backyard during the day, but the one 10 minute trip was too much for him and he was exhausted afterward. We noticed right away he does better when well rested an alert than when he is tired as he becomes sluggish and less aware.

On Thursday, he woke up willing to eat. Hubby is making holistic foods that are known to keep inflammation down (and Max isn’t buying into the holistic approach – at all! See below.) His pill taking went fine – Hubby hid Max’s pills in his food! Max spent 5-10 minutes outside every few hours. I made the mistake of turning on the hose while he was outside, and he ran (there is no other word for it) over to the hose anticipating a water session!! Ummm no.

Max took a nap after that excursion, but I learned my lesson. He’s sick, but rapidly improving – at least in his mind! and he thinks he can do anything.

Thursday evening Max had a stroller walk, and all the fresh air tired him out. But not so much that he couldn’t fight Hubby on the pills. It is little things like this that showed us “Max” is coming back to mental awareness.

On Friday, Max barked for the first time in two weeks. He’d been “wolfing” at us Thursday (a soft little “woof”) to let us know he was displeased with his current living situation, but otherwise had been silent. For his living situation were were told to keep him contained so he doesn’t over exert himself. Knowing this, Hubby bought a 3″ square doggie pen. It is 2-3 times as large as his crate, but Max is still unhappy with the arrangement. He wants to be let free.

Hubby tried another a stroller walk Friday morning hoping the fresh air would cause Max to take a nap: nope. Either the walk wasn’t long enough, or Max is getting stronger rapidly.

I took him to his regular vet Friday for a blood test. Since his white blood cells went bonkers and started attacking him internally, all the drugs he is on are to suppress their production and control his immune system. This test was going to see how well that did. His vet called back 20 minutes after we left to tell us the good news: white blood cells within normal range!! YAY!!

On Saturday, we had a consult with a rehab vet. He is her first GME case, so she was really curious about him and what he’s been through. Before meeting us, she read through the entire Cornell report (we have all the records, Hubby put them in a binder and also made jump drive copies). She told us she expected a really sad case from reading that report, and was shocked to see how well Max was doing.

His left-hind-side is weaker than his right, so he will benefit from rehab. She did allow him to escape his pen at home and have the run of the downstairs (well, walk of the downstairs) provided he doesn’t do any stairs or jump up on furniture (he’s only a couch jumper in Florida (so weird)). He also responded to horses on TV Saturday evening. When Hubby and I returned from a grocery trip Saturday evening, Max wagged his tail at us. That was the first time in 2 weeks!!

On Sunday Max was back to screeching when being pilled. You’d think we were killing him. If anyone happened by and heard this, we’d probably be reported for cruelty to animals. He is such a drama queen!

Max is also back to his “cat-like ways” in refusing food. Hubby put down 5 different meals yesterday before Max would grudgingly eat. (I want to see who wins the holistic food battle. My money is on Max.) Once Max gains back the 2 1/2 pounds he lost to his illness, he’s gonna find the restaurant is closed for business, and he either eats what is put in front of him, or he doesn’t eat. But until that time, he will be offered various meals until he finds something he likes and is willing to eat.

We are fortunate that Max wakes up hungry and his morning pills are tucked inside his food and quickly eaten. The prednisolone is twice a day, probably forever, so one easy pilling is good! Wish the second one went as well. Max also gets CycloSporine twice a day in liquid form. He gets it shot into his mouth, and if not done right he’ll spit it out at you. Since the package warning clearly says, “Wear Gloves”, spitting it on us can’t be good for anyone.

Already Max’s stamina is improved. He’s not sleeping well, but that could be because we have him in the pen at night. Since he normally sleeps on a set up just below the foot of our bed, and more often than not crawls into bed with us, we decided he’d have to sleep in the pen until he was well enough, and aware enough, to dodge Hubby’s kicking sleeping-feet. Max isn’t thrilled with this set up, but for now it is what it is.

I will tell you that on July 12th we were 99.9% certain we were going to have to put Max down. To see how far he’s come in a little over a week is truly amazing.

Here are some photographs I took of The Cornell University Hospital for Animals: 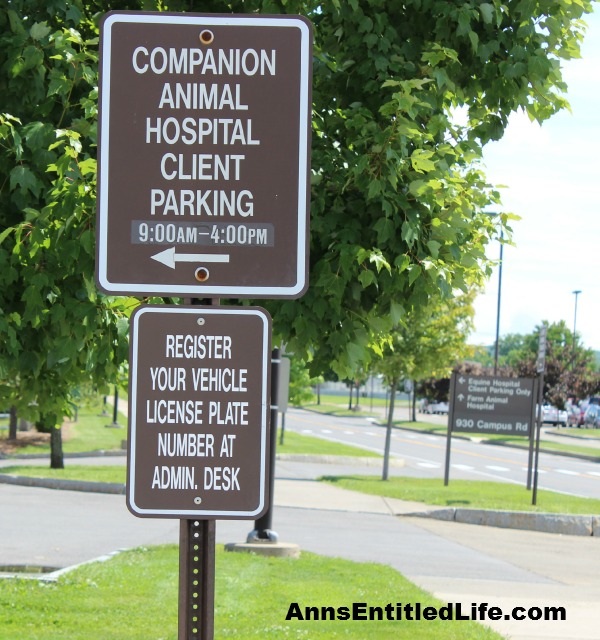 When you pull into the parking lot for the Vet Hospital, you are immediately warned to register your vehicle inside so you don’t get a ticket. Parking wasn’t a problem in July, but I have a feeling that changes next month. 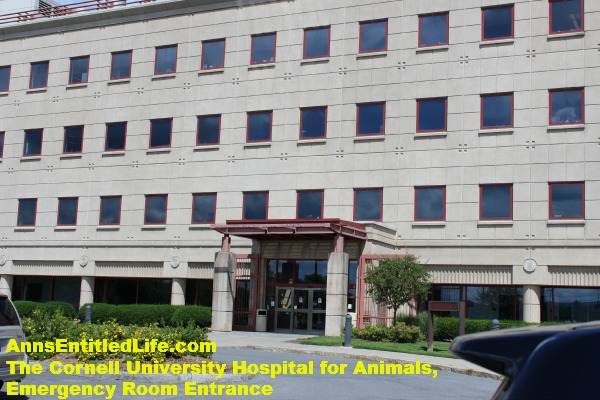 Dropping off and picking up we entered through the The Cornell University Hospital for Animals Emergency Room Entrance.

All manner of pets are treated here. Heck, when we went to pick up Max last Wednesday, someone brought in a kangaroo!

It was two guys bringing the kangaroo in inside a pet crate, and the animal’s back left leg was bandaged up. I wish I had taken a picture of that!! 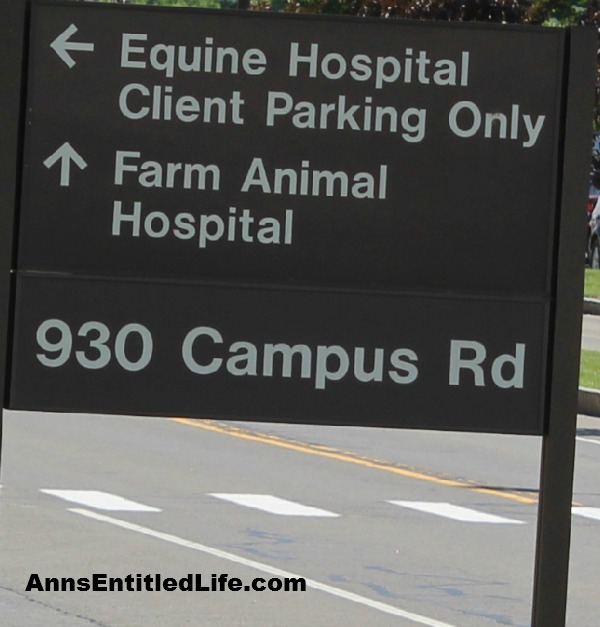 The next entrance over is the horse drop off. (I don’t think the sign is crooked, I think it was the photographer.) 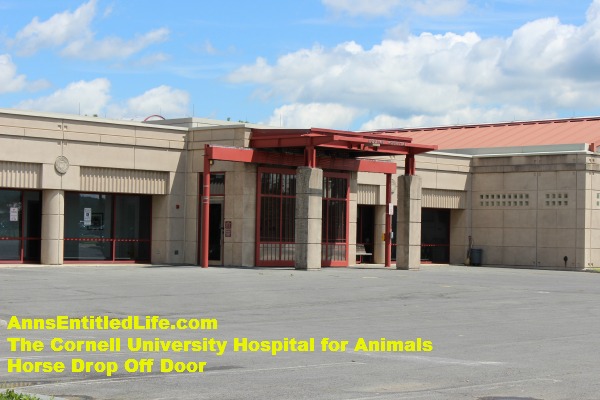 When we left Max on the 12th, someone was offloading a horse there. 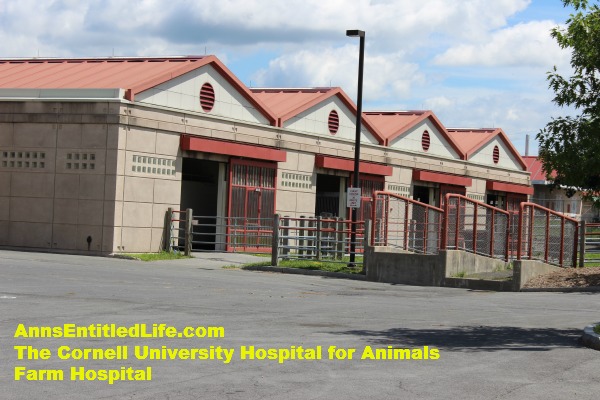 Next door housed all manner of animals. We saw horses, goats and pigs in the corrals up front (to the right side of this building). 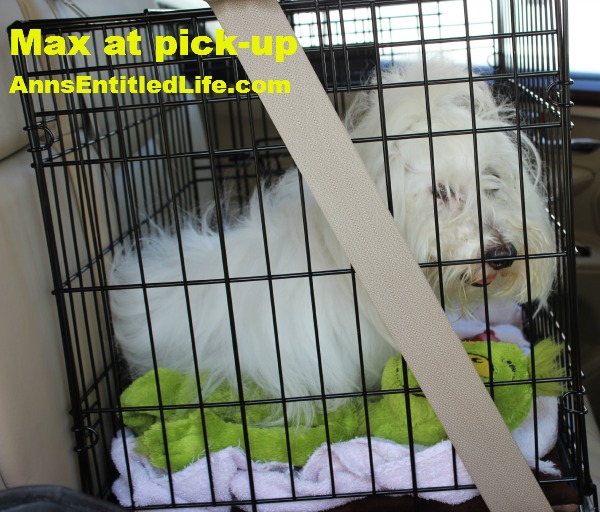 We brought Max some of his favorite toys of the ride home. He didn’t complain about the crate – probably used to it from the hospital. Since we’ve been home, the crate has been for car-rides to various vets. Max hasn’t used a crate for a good 5 years, so I’m waiting for him to rebel.

As of right now, Max is doing far better than we could have ever hoped. He’s clearly in some form of remission. The prognosis for Granulomatous meningoencephalitis (GME) is 33% of dogs go into full remission, 33% go into remission and relapse at some point, and 33% of dogs do not respond to the drugs. Max has responded. The historicals on Granulomatous meningoencephalitis (GME) survival are 15 days – 3 years (tight window there). Hubby told me that we are in uncharted territory though, because in 2012 they started using a new, additional drug, and clearly long term survival rates are not yet available.

We take every day as we receive it with Max. He may survive 6 months, a year, or keep on being a giant PITA for 3 or more years! We won’t know. We do know that we don’t regret taking the drive to Cornell to save his life. Max means a lot to us because he is a funny, quirky, autocratic, giant PITA. We are very glad he is still here to bug the crud out of us as he bends us to his will. We live to serve (Max).