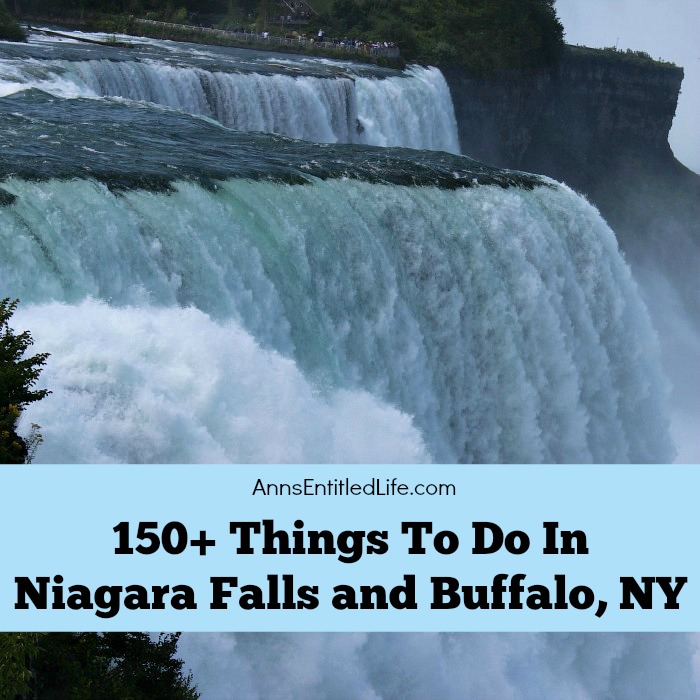 A list of 150+ Things To Do In Niagara Falls and Buffalo, NY that are (mostly) family friendly activities. From state parks to museums, to architecture and zoos, there is a lot to do in Niagara Falls, New York, Buffalo, New York, and all of Western New York.

150+ Things To Do In Niagara Falls and Buffalo, NY

It is time for the 2015 edition of Things To Do In Buffalo and Niagara Falls with updated dates, new festivals, added landmarks, and more fun and attractions for the whole family to enjoy! If you are making a trip to Niagara Falls, don’t neglect the rest of Western New York. There is so much to do and see in this beautiful area, that this list of 150+ Things To Do In Niagara Falls and Buffalo, NY is just the tip of it.

When people say “Buffalo”, they are usually referring to the eight counties of Western New York (Erie, Niagara, Genesee, Wyoming, Orleans, Chautauqua, Cattaraugus and Allegheny). There are so many things to do in Western New York that I cannot possibly list them all. I am once again concentrating on Erie and Niagara County, New York. At the end of this post I do list some popular area attractions outside these two counties under “other”. If you have anything you would like to see added to this list for Western New York attractions. please leave a comment and I will update the list!

● The Broadway Market – established in 1888 on Buffalo’s East Side, the Broadway Market is jammed full of people Easter and Christmas week. Whatever you do, I do not advise Good Friday. Did that once, never again… wow the crowds!

● Buffalo Bites Food Tours – three-hour guided walking tour of the Elmwood Village where you will eat delicious samples from local eateries and explore the exquisite architecture, history and present day vibrancy of this neighborhood. This delicious and memorable experience will entice you to come back to the Elmwood Village.

● The Colored Musicians Club – According to my uncle (who frequents the club), your best night to go is Sunday at 8PM. The other bands listed are practice sessions. You go in the door on the far left. Ring the “doorbell” buzzer and wait for the “click” then pull. Plenty of parking in the area.

● Community Beer Works – Buffalo’s first nanobrewery. If you’d like a tour, here are the tour details.

● Downtown Country Market – Tuesdays and Thursdays, May – October on Main Street in the heart of Downtown Buffalo (Main between Court & Church Streets)

● Frank Lloyd Wright Fontana Boathouse – Buffalo rowing boathouse on the Black Rock Canal. Photos are allowed inside and out.

● Ice Bikes – Combines the activity of riding a bike along with the ability to perform this feat while on the surface of the ice. Ice Bikes of Buffalo will give you a way to participate on the ice if you are not the best on ice skates.

● The Museum of disABILITY History

● Resurgence Brewing Co. – They do offer brewery tours if booked in advance for a fee.

● Buffalo Lighthouse – One of the oldest structures on the Great Lakes, the 1833 Buffalo Light is a beautifully resilient monument to Buffalo’s maritime history. Cooperation between the city, the US Coast Guard, and the Buffalo Lighthouse Association, Lighthouse Point Park resulted in the tours of the lighthouse resuming. This is one I would check their Facebook page to find out new tours and events.

● Hamburg Brewing Company – tours are available for a $15 fee, first come, first served (haha, get it!?)

● Kelkenberg Farm – Clarence Center… they have had farm tours for a loooong time. Heck, I went with Sonny-boy’s kindergarten class over 20 years ago!

● Sugar Shack – A working maple syrup production facility (sugar shack) and a working sawmill are also located here. These facilities are open to public tours and demonstrations when in season (free, permit required).

● If you have a passport or enhanced driver’s license something fun to do is walk across the Rainbow Bridge to Canada. I believe the cost is still $2. When you do, the flags denote the border. Take your picture with one foot in the US, and the other foot in Canada. Sure it is touristy, but it is also kinda neat!